A film about four friends who accidentally discover an invention for time travel. This is low budget, experimental, philosophical and dialogue-rich film has developed a cult following. Grand Jury Prize at 2004 Sundance Film Festival. 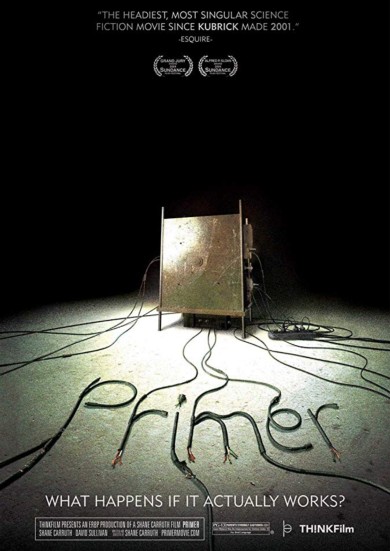 Shane Carruth's "Primer" opens with four techheads addressing envelopes to possible investors; they seek venture capital for a machine they're building in the garage. They're not entirely sure what the machine does, although it certainly does something. Their dialogue is halfway between shop talk and one of those articles in Wired magazine that you never finish. We don't understand most of what they're saying, and neither, perhaps, do they, but we get the drift. Challenging us to listen closely, to half-understand what they half-understand, is one of the ways the film sucks us in.

They steal a catalytic converter for its platinum, and plunder a refrigerator for its freon. Their budget is so small, they could cash the checks on the bus. Aaron and Abe, agreeing that whatever they've invented, they're the ones who invented it, subtly eliminate the other two from the enterprise. They then regard something that looks like an insulated shipping container with wires and dials and coils stuff. This is odd: It secretes protein. More protein than it has time to secrete. Measuring the protein's rate of growth, they determine that one minute in the garage is equal to 1,347 minutes in the machine.

Is time in the machine different than time outside the machine? Apparently. But that would make it some kind of time machine, wouldn't it? Hard to believe. Aaron (Shane Carruth) and Abe (David Sullivan) ponder the machine and look at their results and Aaron concludes it is "the most important thing any living being has ever witnessed." But what is it?

There's a fascination in the way they talk with each other, quickly, softly, excitedly. It's better, actually, that we don't understand everything they say, because that makes us feel more like eavesdroppers and less like the passive audience for predigested dialogue. We can see where they're heading, especially after ... well, I don't want to give away some of the plot, and I may not understand the rest, but it would appear that they can travel through time.

They learn this by seeing their doubles before they have even tried time travel -- proof that later they will travel back to now. Meanwhile (is that the word?) a larger model of the machine is/was assembled in a storage locker by them/their doubles.

Should they personally experiment with time travel? Yes, manifestly, because they already have. "I can think of no way in which this thing would be considered even remotely close to safe," one of them says. But they try it out, journeying into the recent past and buying some mutual funds they know will rise in value.

It seems to work. The side effect, however, is that occasionally there are two of them: the Abe or Aaron who originally lived through the time, and the one who has gone back to the time and is living through it simultaneously. One is a double. Which one? There is a shot where they watch "themselves" from a distance, and we assume those they're watching are themselves living in ordinary time, and they are themselves having traveled back to observe them. But which Abe or Aaron is the real one? If they met, how would they speak? If two sets of the same atoms exist in the same universe at the same time, where did the additional atoms come from? It can make you hungry, thinking about questions like that. "I haven't eaten since later this afternoon," one complains.

"Primer" is a puzzle film that will leave you wondering about paradoxes, loopholes, loose ends, events without explanation, chronologies that don't seem to fit. Abe and Aaron wonder, too, and what seems at first like a perfectly straightforward method for using the machine turns out to be alarmingly complicated; various generations of themselves and their actions prove impossible to keep straight. Carruth handles the problems in an admirably understated way; when one of the characters begins to bleed a little from an ear, what does that mean? Will he be injured in a past he has not yet visited? In that case, is he the double? What happened to the being who arrived at this moment the old-fashioned way, before having traveled back?

The movie delights me with its cocky confidence that the audience can keep up. "Primer" is a film for nerds, geeks, brainiacs, Academic Decathlon winners, programmers, philosophers and the kinds of people who have made it this far into the review. It will surely be hated by those who "go to the movies to be entertained," and embraced and debated by others, who will find it entertains the parts the others do not reach. It is maddening, fascinating and completely successful.

Note: Carruth wrote, directed and edited the movie, composed the score, and starred in it. The budget was reportedly around $7,000, but that was enough: The movie never looks cheap, because every shot looks as it must look. In a New York Times interview, Carruth said he filmed largely in his own garage, and at times he was no more sure what he was creating than his characters were. "Primer" won the award for best drama at Sundance 2004.

Your mind might not exactly be blown, but it should get substantially interfered with by this low-fi sci-fi nightmare from newcomer Shane Carruth about two scientists who come up with the world's most important invention in their garage. In its occultist intensity, Primer is obviously influenced by Darren Aronofsky's Pi and the downbeat menace of Francis Ford Coppola's The Conversation.

That doesn't do justice to its prickly originality, however; it sometimes resembles a rabbitless Donnie Darko for grownups, and the film's paranoid grain is similar in texture to Michael Mann's The Insider. In its weird idealism, though, it actually reminded me a little of The Man in the White Suit, with Alec Guinness as the sprightly boffin who invents self-cleaning cloth. As in that movie, Carruth believes in portraying scientists not as cliched geeks or sinister corporate lackeys, but authentic, if flawed, heroes of original thought who achieve astounding things without institutional help.

Primer was head-scratchingly baffling for an awful lot of the time, especially towards the end. Yet it had me completely gripped like nothing else around. This is a type of movie-making that assumes its audience are intelligent adults - and it breaks lots of other Hollywood rules, too! The dialogue is indirect, obscure, technical stuff. The characters do not overcome emotional obstacles; the two male leads are both married men, yet there is no romantic crisis and the invention's success does not test their friendship in the conventional manner. They even get involved with an extraordinary showdown involving a gun and a woman - yet the narrative style is so indirect, so gnomic, that this event occurs in a dramatic zero-gravity.

As for the science itself, it is evidently bizarre and absurd, though precisely how bizarre and absurd I am not qualified to judge. Writer-director Shane Carruth began his working life as an engineer, though his script might yet find its way into the Bad Science column of this newspaper's Life supplement. But for all its weirdness and indeed barking madness, Primer is a glorious rebuke to a dumbed-down movie world in which scientific and technological investigation means looking something up on Google.

Carruth and David Sullivan play Aaron and Abe, two guys who have day jobs as engineers, and in fact wear suits and ties in various stages of dishevelment throughout the film. They are developing funky projects on their own time, which they are hoping to punt out to VCs - venture capitalists. One of these is a new refrigeration system that gets things cold without itself being cold. But Aaron and Abe become distracted by the strange way in which certain inert gases, in a homespun metal box, appear to increase the mass of an enclosed object under certain conditions. Five years' worth of mould grows in five minutes. A watch left in there runs backwards. That's right. They have invented a time machine.

It is a giant achievement for this film that you don't laugh out loud. You whisper: "Wow." And this deadpan effect is achieved by very plausible stunned behaviour on the part of the two inventors, who don't turn cartwheels or immediately scramble for winning lottery numbers, but look as if the universe might just split in two, right where they have found the hairline crack. They are too scared to say out loud what they have done.

The insuperable difficulty of time-travel stories comes when you travel back to before your time-travel machine was invented. It is a self-cancelling impossibility which Primer sidesteps - kind of - by having its two time-travellers make cautious six-hour hops ahead, before scuttling back to the present. They climb into a great big humming box hidden in a self-storage warehouse from which they are able to make forays into the future, cautiously learn about successful stock prices for companies with trade volumes large enough to camouflage their own bets, before coming back to ground-level. Then they spend that repeat time holed up in a hotel room, where there is no danger of meeting their parallel future-doubles, out foraging for inside information. "Are you hungry?" one asks languidly. "I haven't eaten since later this afternoon."

Does it make them rich? Does it make them happy? Does it, like the treasure of the Sierra Madre, turn them against each other? No, no, and not exactly. There is no obvious moral: Abe and Aaron are tensely in denial about their discovery, which they treat as matter of factly as card-counting at blackjack - the only viable alternative to going gibberingly insane. They fantasise a little about riches and about punching their boss on the nose, before the storyline takes a weird detour into a subplot about someone threatening a woman they know with a gun at a party. In fine Groundhog Day style, they revisit the event again and again, to perfect their technique for disarming the attacker and so impressing the woman's father - an important venture capitalist who can make them both billionaires. The paranoia kicks in when one suspects the other of already spilling the secret to this shadowy Mr Big.

Primer really does spread a radioactive creepiness around its subject, simply by treating it as an everyday conspiracy thriller, and this radioactivity pours relentlessly from the screen. Like its characters, this film is very, very ambitious and rather mad. Yet how much more interesting than the usual low-IQ product elsewhere. It's an exhilarating, disturbing and funny experience.