A love story between a man and a woman who meet in the ruins of post-war Poland, yet keep getting separated by politics, character flaws and twists of fate. 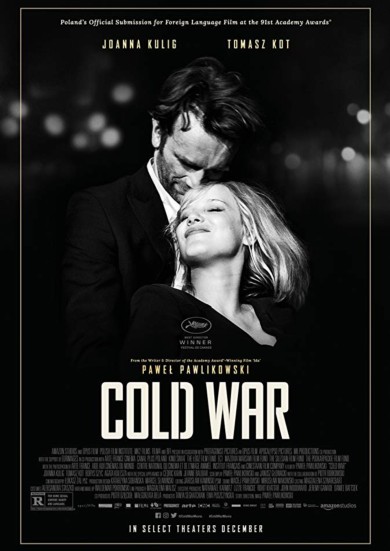 Shot in gorgeous monochrome, the latest film from the Polish director centres on a turbulent, whirlwind romance between two musicians in a divided post-war Europe.

Ordinary love or amour fou? How you answer that question tests how romantically inclined you are, whether you would dismiss a mutually deranging affair as infatuation or identify with it as the state in which many people feel most alive. Cold War puts us into the whirlwind of just such a fierce concupiscence and collision of mismatched souls.

The first setting is late 1940s post-war Poland. The action begins in a moment of seeming innocence with handsome, intense Wiktor (Tomasz Kot), a talented pianist, composer, arranger and conductor touring villages with gimlet-eyed colleague (and lover) Irena (Agata Kulesza) in search of folk-based musical talent, doing field recordings. At an audition, Zula (Joanna Kulig), an audacious self-assured blonde youth, cons her way into a duet with a more purely talented singer. Irena would reject her, telling Wiktor she is just out of prison for murdering her husband, but Wiktor says “she has something.”

They all arrive at a new institute for the creation of a pure socialist art of the people. Wiktor and Irena run it creatively, but as they mould all the talent they’ve found into a performing folk art troupe in traditional national costumes with Zula as the star, the administrator Kaczmarek (Borys Szyc) forces them to consider also performing a hymn to Stalin and agricultural reform. Irena objects and is soon dismissed. When the troupe is booked to perform in Berlin, at a time before the wall was built, Wiktor wants Zula to escape with him into West Berlin. Thereafter borders are crossed many times in many countries; lines of fate are broken and re-intertwined, jealousies and betrayals flourish and die out.

The early part of the film plays out like an endlessly seductive musical rendered in the most gorgeous monochrome cinematography I have seen for some time. You feel many visual influences, Brassai’s nighttime Paris photos are prominent among them, there are Tarkovsky-like compositions and Joseph Losey’s film Eve is close to its mood, but to me this is the better film. The choreography and rhythm of dance, shots and editing is a constant thrill and delight.

This surface whirl of fascination would not work without the luminous presence of actor Joanna Kulig, who on this performance is a powerful enough to become the Jeanne Moreau de nos jours. As pugnacious as she is enthralling, she centres the film as a kind of wild child bullshit detector who cannot co-exist with the insufficiently urgent Wiktor but cannot do without him either. The too-refined Wiktor (played with such beautiful stillness by Kot) is obsessed with her to the point where he will risk freedom just to be in the same concert hall.

This hopelessly unsuited couple are fictionalised versions of Pawel Pawlikowski’s own parents and through them we experience a near-equal disenchantment with socialist and capitalist mores and morals. The cool delirium of the 1950s jazz age in the West fades as the reality of cross-border desire bites. You could say that the film is most likely to appeal to baby boomers such as myself, for whom the era described was the backdrop to our childhood, but this film fizzes with a devotional energy and political relevance that will transcend any such pigeonholing. It was the first film I saw of the Cannes competition, and I hope it wins big.

Unattainable desire hurts deeply, scars permanently and like in “Casablanca,” “Passionate Friends” and countless others, makes for some of film history’s most swoon-worthy stories of passion. An aching film on such exquisite pains of impossible love, Paweł Pawlikowski’s “Cold War” concurrently swells your heart and breaks it, just like the sore memory of a lover that drifted away from your life, or an intensely craved kiss that never was. It’s a tale with the makings of legendary sagas, following the union and break-up (and union and break-up again and again) of Wiktor and Zula, a classically gorgeous couple from the opposite sides of the tracks. They first meet deep in the dilapidated countryside of the post-World War II Poland. They exchange suggestive glances and embark on a stormy affair that disastrously evolves over two isolating decades and numerous unsympathetic locales across Europe.

While ageless and universal, “Cold War” comes from a deeply personal place for Pawlikowski—Wiktor and Zula are based on and named after Pawlikowski’s own parents, who (as the filmmaker openly voices in every interview) had their own thundery relationship battle that stretched over four decades. In this cinematically condensed, informally episodic version (jazzy and unruly like some of the film’s music), the attractive duo is played by the striking Tomasz Kot and the immensely talented actor/singer Joanna Kulig; an instant, Marilyn-Monroe-meets-Liv Ullmann-esque vision.

A sophisticated conductor and musicologist traveling through Poland with his producer Irena (Agata Kulesza) and recording folk tunes with the hopes of reintroducing their glorious melodies, Wiktor auditions talent after talent for the choral ensemble he is tasked to create. It’s during one of those tiring sessions that the fiery Zula enters the picture. She sings well; she says she can easily learn to dance and in what might be a con to leave a lasting impression, claims she once stabbed her abusive father fatally. Falling for her directness and turbulent spirit immediately, Wiktor recruits her. And the impossible obstacles introduce themselves in no time once their affair takes off in earnest.

Nostalgically shot in sterling black and white and the boxy Academy aspect ratio by cinematographer Lukasz Zal (like Pawlikowski’s “Ida,’ a heartbreaking study of the pull of identity), “Cold War” is really a film about the hardships of living in exile. In that, the starry-eyed Wiktor and the hardened Zula make and break promises, support and betray each other, and both abandon and reassume identities to survive wherever life takes them within or on the other side of the Iron Curtain. Their brief bliss while traveling and making music together gets cut short when Zula doesn’t turn up for their haphazardly planned escape from Poland. When they meet years later in the cobblestone streets of Paris and reinstate their impossible romance in the smoky corners of jazz clubs filled with snobby intellectuals who look down on Zula, their odyssey takes an even more impossible turn: Zula plays up her national pride—a form of self-defense any immigrant will relate to. She can no longer stand the submissive, alienating man Wiktor has become.

And yet, their love for each other never dies; it instead takes on renewed shapes and forms. Expertly braiding the historical canvas of the '50s and '60s and the era’s music into the lovers’ affair (this is one soundtrack you will quickly want to get your hands on), Pawlikowski (along with his co-writers Janusz Głowacki and Piotr Borkowski) both honors and attempts to make sense of his parents’ chaotic togetherness. But most of all, he hits a timeless cinematic nerve that pulsates with euphoric verve. The tragic yearning in the impossibly sexy “Cold War” is so palpable that it makes you feel thankful to be alive with human feelings, heartbreaks of the past be damned.