Jin (John Cho) visits his father, a renowned Korean architect, after he falls into a coma. He meets Casey (up and coming Haley Jo Richardson) a young woman with a passion for architecture. Reflective film on themes of dysfunction and friendship set against the surprising architectural heritage of a Midwestern town. 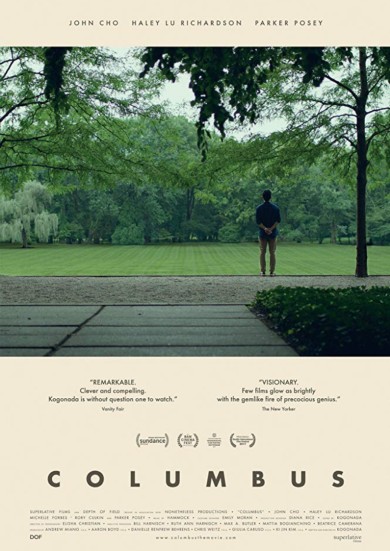 Yes, we’re in the territory of the small-town coming-of-age movie – but things are bound to be a little different, given that the small town is Columbus, Indiana, noted for its unusual concentration of outstanding modernist architecture. The film finds its strikingly perceptive visual bard in Korean-American director kogonada, who brings a deeply idiosyncratic stylistic and dramatic sensibility to a story that’s not just a character piece, but also a finely nuanced study of people, space and consciousness.

An ashamedly rarefied artistic approach will make for very niche appeal, but superb ensemble acting, keen intelligence and low-key but very palpable emotional impact will make Columbus an essential visit for discerning art-house buyers and programmers. It will also provide further prestige for Columbus, Indiana itself – which could probably use some good press these days, given that the town is also known as the birthplace of US vice president Mike Pence.

Korean-born, US-based kogonada is best known for his video essays, or ‘supercuts’, on directors including Stanley Kubrick, but establishes his own superbly confident, calm approach in this story about people and the buildings that bring them together.

The central character is 19-year-old working-class girl Casey (Haley Lu Richardson), recently graduated and undecided about her future. Currently working as a librarian, alongside a simpatico, cerebral friend (Rory Culkin), she’s in love with, and deeply knowledgeable about, the town’s architecture, including buildings by Eero Saarinen, James Stewart Polshek and Deborah Berke – edifices which can properly be counted among the film’s stars. Sensitive, intelligent Casey could have a career studying architecture, but feels she needs to stay at home and tend her factory worker mother (Michelle Forbes), just emerging from a troubled period.

Also in town, having flown in from Seoul, is literary translator Jin (John Cho), the middle-aged son of a visiting Korean architecture professor who has collapsed; the professor’s assistant, Yale academic Eleanor (Parker Posey), is an old flame of Jin. Cooling his heels in town while Dad is in hospital, Jin spends time with Casey, listening to her wax enthusiastic about the buildings she loves, and contemplating his own current enforced limbo. The pair bond in a way that’s intimate but non-sexual, rather like – in a muted, non-comic manner – the relationship between the Bill Murray and Scarlett Johansson characters in Lost in Translation.

Columbus is a coolly executed drama, and low on event – at one point, talking about his father’s condition, Jin comments, “This isn’t the movies. Nothing’s going to happen.” In fact, much does happen, although it often happens in spaces between scenes, or on characters’ faces. Kogonada frequently inserts this kind of wry, unobtrusive commentary on his own mode of film-making, as when Culkin delivers an intriguing disquisition on the difference between ‘attention’ and ‘interest’ (slow cinema aficionados, discuss) and after a meal seemingly low on spice, Casey comments that the result is more subtle, as not only do you savour the food properly, you also get a better aftertaste.

Appreciative viewers of Columbus will certainly appreciate an aftertaste, as its ideas and feelings resonate beautifully – not least because of kogonada’s own unconventional editing, often highlighting quasi-musical counterpoint. Elisha Christian’s superbly composed  cinematography makes streets and open spaces feel eerie yet warm, suggestive of a functioning utopian space. Where it might have been easy to depict the place as a chilly hard-angled ghost town à la Antonioni, we also get telling shots of another Columbus, run-down and proletarian, existing alongside the elegance. The interiors, too, are superbly shot – notably the magnificent residence seen at the start, its straight lines evoking the grids of a Mondrian painting.

Into what might have been an alienating, hard-edged setting, human warmth comes from some relishably muted performances. Posey gives her most mature, nuanced turn to date, while Cho – worlds away from the commercial terrain of his Star Trek and the Harold and Kumar appearances – economically suggests the turbulent inner life of a saturnine, emotionally contained loner.

At the centre of the film, however, is a deeply charismatic performance by Haley Lu Richardson (recently seen in feistier mode in M. Night Shyamalan’s Split), whose Casey emerges though a plethora of ever-shifting emotional fine tunings, even though she speaks in the flat tone that’s a trademark of contemporary US youth. But it’s Richardson’s face that does so much of the work – radiant, luminous, often amused, never over-expressive but always responsive.

Above all, you really believe in Casey as a kind of character that’s only too rare in contemporary US cinema – someone who has not just an emotional life, but an intellectual one too.

An assured and hypnotic debut from tyro writer/director Kogonada with a terrific cast.

There’s an old saying, often attributed to Martin Mull, “Writing about music is like dancing about architecture.” In many ways first-time writer/director Kogonada’s “Columbus” treats architecture like music, as its protagonists write, talk, bicker, and dance about an extraordinary collection of modernist structures in the unassuming Midwest town of Columbus, Ind. The hypnotically paced drama carried by the serendipitous odd-couple pairing of John Cho and Haley Lu Richardson is lovely and tender, marking Kogonada as an auteur to watch.

A film critic and video essayist with evident affection for the work of Asian masters ranging from Yasujirō Ozu to Hirokazu Koreeda, the mono-monikered director examines the relationships between his characters and their environment with an architect’s attention to detail. That he also trains his lens on a place and people rarely explored on film, and provides a quintet of terrific performers with the opportunity to stretch and showcase their skills, only adds to his debut’s unique appeal.

Casey (Richardson) has lived in Columbus her entire life. Fast approaching her 20s (or possibly just starting them, it’s not clear), she’s beginning to think about next steps. But a deep connection to her hometown and a strong bond with her working-class mother (Michelle Forbes, moving and lived-in), a recovering addict now in a stable place, makes Casey apprehensive about leaving to pursue her interest in architecture.

Jin (Cho) left his family behind years ago, but returns to the U.S. from his new life in Korea, where he translates literature, when his architecture professor father collapses on a visit to Columbus and is hospitalized in a coma. Although his passions led elsewhere, Jin retains a lingering guilt, and defensiveness, over his lack of family commitment.

Casey and Jin inevitably cross paths, and their casual conversations blossom into a genuine friendship, and possible a courtship. Nothing is quite so simple in “Columbus,” and Kogonada is more interested in the characters’ overlapping and divergent worldviews and dreams, based on culture, environment, and upbringing.

The pair each have a secondary confidante/love interest. Jin with his father’s colleague (Parker Posey, vibrant), on whom he nursed a crush in his youth, and Casey with hyperarticulate Doctoral student Gabriel (Rory Culkin, charming). At one point Gabriel delivers a spellbinding dissection of the modern attention span, suggesting Kogonada is aware of the material’s ponderous nature and specialized audience appeal.

But those who appreciate “Columbus” will likely take it to heart. The relationships between each of the characters are imbued with warmth and humanity, and the filmmaking — like the city’s structures designed by the likes of Eero Saarinen and I.M. Pei — is simply gorgeous.

The modernist landmarks in Columbus (incidentally the hometown of Vice President Mike Pence) are true co-stars here. Casey’s appreciation of the “healing power” of buildings stirs something in Jin that never quite connected when he was with his father (although it’s surely no coincidence their bond coincides with his father’s coma), and the film’s gentle explorations of class divides — we’re constantly reminded of the people trying to make a living inside of these works of art — qualify as a timely addition to the current national dialog.

But Kogonada, who also serves as the editor, has also made a film that feels timeless. From Elisha Christian’s rigorously composed cinematography to Hammock’s sparingly but very effectively used ambient electro score (the film gets just as much emotion out of stretches of silence and layered sound design).

At the center of it all, amid the buildings, are Cho and Richardson. One veteran demonstrating his untapped ability as a captivatingly sincere leading man, and one relative newcomer proving her ability of holding the screen with maximum soulfulness in a minimalist drama. Together they form an unexpected, but perfectly constructed, pair.