A Ugandan girl sees her world rapidly change after being introduced to the competitive game of chess. A feel-good movie with outstanding performances by Lupita Nyong'o and David Oyelowo. 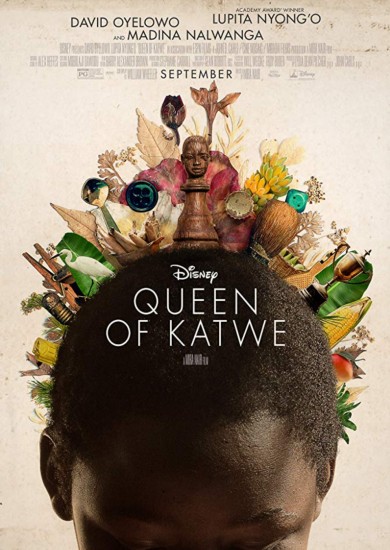 David Oyelowo and Lupita Nyong’o deliver nuanced performances in a movie which threatens to back itself into a corner but has enough zest and intelligence to carry through.

Making a chess movie is a tricky move. Your first stumbling block is that, of all sports, this must be one of the most uncinematic – as well as the most baffling for the novice. Even those familiar with the queen’s gambit need a little while to take a look at a board in an apparently tense setup and assess its import for both players.

Plus, on the big screen at least, the dramatis personae are rarely appealing. Traditionally, movie chess is the recourse of the brilliant but socially awkward male, who uses it to communicate when more common methods prove elusive. Such folk can be a struggle to root for, their victories and defeats wrapped up in psychological trauma and solitary childhoods. A case in point premiered at Toronto two years ago: Pawn Sacrifice, a woozily-boring Bobby Fischer biopic with Tobey Maguire sweating over the bishops.

But The Queen of Katwe has a trump card in its disarming heroine. It is easy to cheerlead for Phiona Mutesi (Madina Nalwanga), a pre-teen living in a Ugandan shanty town, whose life prospects seem to pick up considerably after she finds she has an unexpected knack for seeing eight moves ahead.

She’s coached by Robert Katende (David Oyelowo), a local minister who runs a kids club when he’s not being the world’s most charming amateur footballer and loving husband. But it’s one of the great joys of the film that he never feels repellently saintly. Indeed as the closing credits indicate, in their charming intro to the real-life characters, the actual man is yet more endlessly generous.

Anyway, the glass ceilings against which shock prodigy must crack her skull are more numerous than those facing the usual aspirant grandmaster. How will she muster the money to compete in a local schools competition – especially given she’s not actually in school? How will she juggle her studies with looking after her kid brother and flogging bread in the market? And how many people really make it when they can neither read nor – after another brother’s accident cleans them out of rent money – have a roof over their head?

Phiona’s other trouble is her mother: a fiercely protective single parent with understandable concerns about how her daughter will cope if and when disappointment comes. She’s played, against type, by Lupita Nyong’o, giving rippling pride and strictness to her first non-CGI role since 12 Years a Slave. The logic of making the character quite so bristly is vindicated in the surprisingly-moving climax.

In fact for what is, in essence, a by-numbers Disney sports flick, there’s endless freshness and vivacity to Mira Nair’s picture – her best in years. The Slumdog settings are eye-poppingly well shot by Sean Bobbitt, and though it’s hard to attest to their authenticity, urban Africa is rarely this intimately drawn. Conflict with snooty public school kids might be a bit blunt, but it’s played for compassionate comedy, and The Queen of Katwe remains quite a challenging prospect for a mainstream mass market audience.

There’s one too many bits of basic chess lingo co-opted into feelgood life mottos, yet the game itself often feels happily incidental to the narrative of the film – so you can understand the need to knit it in somehow. What’s instead key is the earnestness and the exuberance, executed with a conviction that makes this that rare thing: a kids hobby movie where something really is at stake.

Films that inspire and warm our hearts are often dismissed as manipulative, treacly or sentimental. Even the word “inspirational” has gotten a bad rap. But some stories are simply that: inspiring and heartwarming. “Queen of Katwe,” which chronicles the true story of a young female Ugandan chess champion, is just such a tale.

And Mira Nair, who deftly captured the visual aesthetic and rhythms of foreign cultures in films like “Monsoon Wedding,” “Salaam Bombay!” and “Mississippi Masala,” is probably the ideal match of filmmaker to material. The director, known for her vibrantly beautiful films, has had a home in Uganda for nearly three decades, and she is also the founder of a film school there. She knows Uganda, and it shows.

The nation’s urban life is vividly evoked in the tale of 9-year old Phiona Mutesi (Madina Nalwanga), a girl from the slums of Kampala, who becomes a national chess champion. When we meet her, she is living on a subsistence level with her strong-willed mother Harriet (Lupita Nyong’o) and three siblings.

One day her brother Brian (Martin Kabanza) happens upon a church-sponsored chess program run by Robert Katende (David Oyelowo). She follows her brother and is immediately drawn to the game, with its focus on reasoning and innovation, and the spirit of heady competition. Phiona’s keen intelligence and fierce determination render her a natural, and her aptitude for the game is astounding. Katende, trained as a civil engineer, sees Phiona’s potential and fights for her inclusion in tournaments, as well as for his other team members.

Despite being illiterate, Phiona rises rapidly through the ranks, playing against privileged and educated young people who seem to take their good fortune for granted. Within two years she becomes Uganda’s junior champion, and learns to read.

Let’s be clear: Little about chess makes it a riveting spectator sport. Scenes focused on the checkered game board won’t make pulses race, but the expressive face of young Nalwanga and her descriptive body language makes the tale compelling.

In her first acting role, Nalwanga is terrific. She deftly conveys Phiona’s self-possession, intelligence and growing sense that anything is possible if you work hard enough. Discovered at a dance academy, the 14-year-old Nalwanga was a bit older than the character, but she inhabits the role with striking dignity and grace.

The story is based on the eponymous book by Tim Crothers, with a screenplay by William Wheeler (“The Reluctant Fundamentalist”). The Afrocentric soundtrack and score by Alex Heffes (“Mandela: Long Walk to Freedom”), utilizing native Ugandan instruments, is delightfully infectious. Cinematographer Sean Bobbitt’s hand-held camera brings the sprawling city of Kampala to vivid, color-drenched life: Textures feel palpable. Busy streets throb with activity.

What stands out powerfully in this engaging film is that it is a Hollywood production starring only black actors. Since it takes place in Africa, this shouldn’t be noteworthy, but given the minuscule percentage of people of color working in major studio films, it’s a point worth noting and celebrating.

“Queen of Katwe” is foremost a coming-of-age tale, unspooling in a place vastly different than what most American audiences can imagine. Yet, Phiona’s desire to distinguish herself, to see the world and to transcend her humble origins, has universal resonance.

Her abilities and growing bond with the kindly Katende mystify her hardworking mother Harriet. The woman’s concerns are simple: How can a game and the encouragement of a stranger be more important than helping her mother feed the family? Sheer survival has always been her focus. Nyong’o is convincing in the part; her delicate stature belies her gritty resolve.

At one point, Harriet forbids her daughter from playing chess and going to tournaments. She fears that if her daughter glimpses greater possibilities in life she might never be content to return to Kampala, and will fail to fit in anywhere. Nyong’o embodies this maternal struggle poignantly; it no doubt helps that the Oscar-winner has long known director Nair. Raised in Kenya, Nyong’o graduated from Nair’s Ugandan school Maisha Film Lab and later interned at her production company.

A classically trained actor of Nigerian-British descent, Oyelowo is perfectly cast as Katende, Phiona’s mentor. Audiences will find themselves rooting for this kindhearted man to find happiness as much as for Phiona. All this speaks to Oyelowo’s authentic portrayal. There doesn’t seem anything Oyelowo can’t do. He can play Katende, Martin Luther King in “Selma,” a Civil War corporal in “Lincoln” or a preacher in “The Help” with equal passion and credibility.

While the key roles belong to Nalwanga, Oyelowo and Nyong’o, the non-professional ensemble cast is also wonderful, adding to the sense of rich authenticity in “Queen of Katwe.” Watching Phiona prevail and achieve champion status, we can’t help but have lumps in our throats. Her perseverance and eventual empowerment speak poignantly to audiences.

The view of Africa often portrayed in movies is that of a continent crippled by famine, genocide, poverty and disease. This humanistic tale, helmed by a masterful filmmaker, offers a potent — and yes, inspirational — story of triumph against huge odds.