Ruby (Jean Reno) has one thing in his head - revenge for the killing of the woman he loved. Quentin (Gérard Depardieu) has very little in his - just enough to make him rather sweet and rather dim. They meet in prison and when they get out life throws them together. 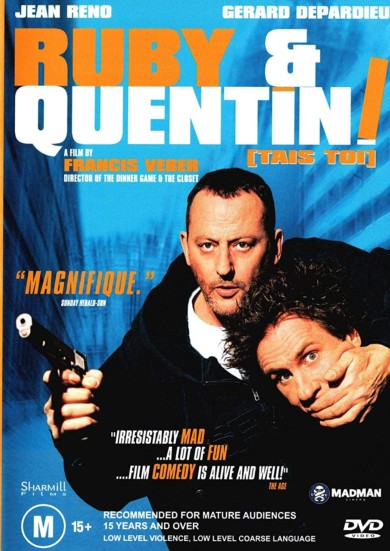 After a sociological satire that was only fitfully successful (The Closet), comedy maestro Francis Veber is back conducting the score that has become his signature: the male-bonding farce. The adventures of a dim-witted, ne'er-do-well robber and a vengeful, cold-blooded professional on the run both from police and a gang of rival gangsters, Ruby & Quentin harks merrily back to the chase farces of Veber's earlier successes as writer-director, when Gerard Depardieu played impassive straight man to nebbishy Pierre Richard. Though not quite in the league of his best films, especially The Dinner Game (which ironically was a conventional but effective canning of his hit stage comedy), this is fast and funny light entertainment and should satisfy the expectations of producer-distributor-exporting major UGC both at home and abroad.

Since the breakup of the Depardieu/Richard tandem, Veber has had trouble finding a new winning odd couple for his original screenplays. With his new film he has hit on an inspired twist by having Depardieu now play the 'twat' (as playwright Ronald Harwood terms the Veberian gormless fool in his current London stage adaptation of The Dinner Game). Depardieu has proven how deft and subtle a comedian he can be, most recently as the lovestruck homophobe of The Closet. In Quentin & Ruby, he outdoes his earlier performances as a grinning hulk with the brain of a brontosaurus. Indeed, if Veber's farcical plotting is sometimes familiarly perfunctory, it is Depardieu who humanises the mechanics with wacky sweetness, charm and perfect comic timing.

The tone is set immediately with that familiar Veber setpiece, the botched holdup, as Depardieu bursts ineptly into an agency with gun in hand, only to find he's robbing a currency exchange window. After being redirected to the right bank across the street, he is nabbed by police in a movie theatre (where he has paused to enjoy a kiddie's matinee attraction) and imprisoned. Voluble, childlike and eager to make a friend (he wants to open up a bistro called 'The Two Friends'), Depardieu drives several fellow inmates to near-homicidal distraction before cop Richard Berry has the idea of locking him up with tight-lipped Jean Reno (whom Veber unsuccessfully tried to pair off with singer Patrick Bruel in his 1997 comedy, Le Jaguar, but who here is Depardieu's pitch-perfect straight man). Reno has intercepted and stashed away the loot of an armoured-car heist engineered by his criminal and romantic rival, Jean-Pierre Malo, and wants out to avenge his mistress' murder (Malo's wife). When Reno and Depardieu finally break out (in a hair-brained scheme only Depardieu's innocent brain could devise), the chase is on as police and criminals attempt to converge on the runaway pair.

Even when we're reminded of gags past, Veber is a master at recycling situations in hilarious new configurations and with editor Georges Klotz's aid he keeps the fun zinging along. On the debit side, Veber injects some uninspired film noir strophes, notably a climactic gun duel which jars with the comic tone of what has gone before. Even feebler is the 11th hour introduction of Leonor Varela's Albanian illegal immigrant whose sole purpose (apart from being the spitting image of Reno's murdered love) is to set up the disappointing denouement.

Part hackneyed crime caper, part amiable buddy farce, Tais-Toi! (Shut Up!) stars Jean Reno and Gérard Depardieu as an odd couple on the run from gangsters and the law. It's harmless, formulaic stuff, but it's expertly played - particularly by Depardieu - and director Francis Veber applies a surehandedness and a deft turn of pace that keep the laughs ticking over even as the leads scrabble to cover the skinniest of plots.

Reno's Ruby is a coolly professional hardman, bent on taking vengeance on Vogel, the gangster who killed his girlfriend. Arrested after relieving Vogel's thugs of a mountain of cash, Ruby is thrown into a cell with Depardieu's Quentin. A motormouth simpleton whose guileless enthusiasm for conversation is matched by his obliviousness to the fact that no-one can stand him, Quentin latches onto the reluctant Ruby and flukes them a suitably comic escape. Cue all the slapstick violence, car chases, cross-dressing, falling outs and joyous-coming-together-despite-their-differences you'd expect, as they avoid the police, recover Ruby's loot and face down the bad guys.

"LEAVES TIME FOR THE LEADS TO BANTER"

The crime elements of the plot are beyond stale. But by smartly skipping most of the staple crime movie scenes, Veber keeps the going fresh and leaves more time for the leads to banter. All Reno has to do is bolt it down straight and sober; Depardieu is as alive as he's been in years, his wide-eyed fool brimming with glee and humanity, stealing and redeeming the show. Few films this flimsy deserve such excellent luck.

What you thought about Ruby & Quentin (Tais-toi!)

146 members and guests attended this early Christmas screening and 61 of you provided a comment giving a hit rate of 42%. The free wine and mince pies seem to go down well and we hope that those of you lucky enough to win one of the films in the raffle have enjoyed watching them during the break.

The choice of film, always relatively light in tone at this time of the year was considered “Much, much funnier than it had a right to be! In retrospect just a lightweight slapstick comedy, but elevated to laugh-out-loud funny by pacey story and super acting, Depardieu in particular”.

“A delight. The plot, the Hawksian slightness of which is disguised by the speed with which it is rattled through, sees an oddball couple familiar from 'Trains, planes and automobiles' amongst many others leap continually from frying pan to fire to eventual, satisfying, denouement. Cliché and predictability neatly side stepped with pace and the verve of the off kilter humour. Depardieu in particular is superb, who knew he could do comedy so fluffily light? And so (relatively) thin! (For those of you who did not spot it, the film was made in 2003) The spirits of Stan Laurel, Harpo Marx and Father Dougal McGuire are duly invoked. A perfect Christmas offering”.

Other comments were as follows “Hilarious”. “Great end film”. “Pas sérieux! A great film”. “Excellent acting. Complex, multi layered plot”. “Thank you! As unusual”. Very funny!!” “Wonderful. Very enjoyable”. “Every once in a while we all need a movie like that! Tremendous fun”. “Great fun, a nice change - more please. The French do these films so well”. “Good harmless fun! Very entertaining”. “Some amusing moments but mostly an average guy buddy shoot ‘em up, car- chase movie”. “A very entertaining film. Just the job for this time of the year”. “Just about the funniest film I have seen”. “French comedy at its very best”.

“Quite funny and generally entertaining – but a bit slapstick for me”. “A great film – just right for Christmas”. “Great fun”. “Please find another film like this. Preferably with slower sub titles”. “A bit of fun before Christmas – and why not. Thin on plot, but such fun”. “Could have been more subtle. Good to laugh out loud though”. “Gerrard was brilliant. Unusual role for him. Took us back to Saturday morning pictures”. “Depardieu was amazing. Thoroughly entertaining. A laugh out loud film!” “Hooray for cops and robbers”. “Great film. Great acting. I loved it”. “Hilarious caper”. “It was very funny”. “He’s stuck with him for life. Laugh out loud – so funny but so poignant too. Fantastic editing”. “Trés Amusant! A good pre – Christmas offering”. “Brilliant – what fun. Great humour”. “Perfect for year-end”. “Laugh out loud silly. I loved it”. “Good fun”. “Very good fun”. “Best film of the year. So slick. Such a good laugh”. “Brilliant”. ““Trés Amusant!” “Predictable nonsense”. “Brilliant”. “Truly excellent! Vive le Cinema Francais!” “A violent film that was generally funny. Moral tale well told”. “Brilliant”. “Very funny”.