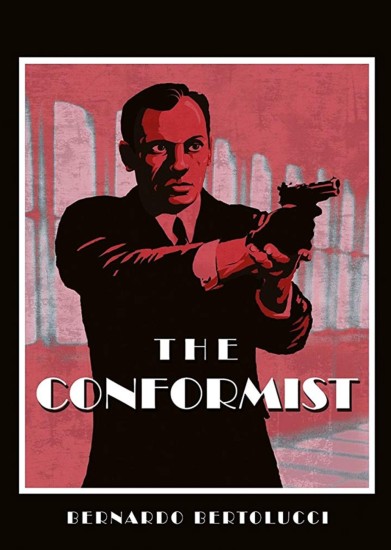 Bernardo Bertolucci may be more familiar to modern audiences for his grand epics like The Last Emperor, but in the early 1970s he was a key figure in Europe's art cinema scene. With The Conformist he combined the radical ideas of his mentor Jean-Luc Godard with a more digestible thriller format, gaining instant international acclaim. Although it remains a dense and intellectual exercise, its relatively conventional hit-man plot and sumptuous photography make it an accessible entry point into the politically charged European filmmaking of the era.

Jean-Louis Trintignant plays Clerici, the titular conformist who's desperate to fit in with the prevailing mood of fascism sweeping 1930s Italy. After joining a paramilitary group he's assigned to assassinate a subversive professor who taught him at college. Combining the execution order with his honeymoon, he takes his new wife to liberal Paris but finds himself haunted by indecision as he falls for the professor's irresistible bohemian wife. Through flashbacks we later realise that Clerici's political views and obsession with convention both derive from a disturbing episode in his childhood that left him repressed and tormented.

With its complex narrative structure and its references to Freudian psychology and left-wing politics, The Conformist is in some ways a demanding film. But visually it is unambiguously beautiful: Vittorio Storaro's cinematography uses darkness and shadows to highlight Clerici's fractured mental state, while Bertolucci entraps his characters within large, empty modernist buildings to convey a sense of fascist menace (surely an influence on Terry Gilliam). A potent mix of sex, psychology, politics and visual extravagance, The Conformist is one of the truly great films of the 1970s that shouldn't be missed on this big-screen re-release.

The 29-year-old Bernado Bertolucci became a major international director in 1970 with The Conformist, his adaptation of Alberto Moravia's novel about the making of an Italian fascist, and it is good to have it back on the big screen in a new print that does justice to Vittorio Scarfiotti's art direction. Jean-Louis Trintignant is magnificent as the weak, middle-class intellectual finding a poisonous role as a fascist man of action in Mussolini's Italy, his life story unfolding during a 1938 assignment to assassinate his former mentor, a liberal living in French exile. The astonishing use of Art Deco and grandiose fascist architecture makes it an expressive spectacle, but the psychology is what Orson Welles called 'dollar-book Freud.'

Bernardo Bertolucci's mysterious 1970 classic is now on rerelease at London's BFI Southbank as part of a "European Noir" season, and this is perhaps the most sympathetic context for it. What comes across afresh is Italian cinema's recurrent insistence on finding in fascism a sexual reflex - both cause and effect of sexual dysfunction, guilt and abuse. This approach arguably makes light of history and ideology, but Bertolucci's film has the compelling quality of a bad dream.

Jean-Louis Trintignant plays Clerici, a well-to-do young man who has become a self-hating homosexual owing to a bizarre attempt at molestation in childhood by the family chauffeur. Concealing this has led him to want to "fit in" at any price, so he joins Mussolini's fascists in the 1920s. On honeymoon with his bride, Guilia (Stefania Sandrelli), he seeks out Quadri (Enzo Tarascio), the supervisor of his doctoral thesis on Plato, who is now an anti-fascist organiser; Clerici has promised his fascist masters to assassinate this man, to prove his loyalty. The influence on The Godfather is clear, but the movie's decadent sexual torpor marks its difference from the striving, blue-collar cinema of Coppola or Scorsese, alongside that patrician-aesthete view of homosexuality as tragic inner wound. Like a sexualised Masque of the Red Death, The Conformist gives us a fervent Sapphic Tango in Paris, between the wives of Clerici and Quadri. Gripping.

What you thought about The Conformist (Il conformista)

107 members and guests attended the screening of The Conformist (IL conformista). 43 responded, a 40% hit rate. Observations were mixed and the advice from one correspondent “Goodies and baddies all mixed up – read your notes again and see what IMDB can explain” is fair comment for those of you who thought the film “very strange” and asked “What was going on? But enjoyable”. Also the comment, “after reading the reviews, I was expecting something more impressive. The action just about held my interest but I thought the acting was hammy. Can't say I found it "truly great"!” was echoed with “Bleak – difficult to follow – preferred “Last Tango in Paris”.

Elements of the film were highlighted with observations like “I loved the filming, photography superb. Handheld camera in woods amazing” coupled with “I got rather confused though” and “Overlong for a straightforward story. Lacked tension. Photography arresting at times”. “Amazing atmosphere created with the setting and camera – many levels to explore – deep – thought provoking”. “Intriguing”. “A little too long, but beautifully filmed and acted”. “Wonderful visual effects. Stunning “shot making”. I struggled with the storyline”.

However praise indeed from one reviewer with this: “Wonderful visuals and characters... they don't make movies like this anymore, which is a shame. A classic indeed”. And “The word masterpiece is often used lightly; not about The Conformist though. A study of fascist Italy alongside sexual tensions; I did wonder how seeing this again may work. Seemed to echo some of today's drift in politics. A film that drips with masculinity and gender relations that feel disturbing. Really thought the film worked well where the light doesn't reach the dark: sharp lighting is contrasted with sharp shadows. Film making and the narrative follow the distinction of "good" and "evil". I know its complex and demanding (especially as folk don't like themselves, let alone each other). I found the menace of large buildings mixing with the sexual confusion striking but the film is beautifully made, even though some of the cuts away are faster than we might want. Thought Trintignant's uncertainty in his role so that he's not a real thug, with the quirky mannerisms, like the strange goofy behaviour (pointing the gun at his boss, then at his own head) were telling. The literary quotes in Latin and poetry make him too clever for Fascist politics; so is it all as a game? Scene upon scene is so well constructed that when some ideas are harder to grasp, it doesn't matter. Yet the camera movement, vibrant colours, complex angles do really keep our attention. Amazing to think that Bertolucci was only 29 when he made this!” “A parable of identity, and how identities are shaped by interaction with others. All encapsulated in the framework of a thriller, with startling visual vignettes and a constant curiosity with what will happen next. And of course, no conclusion”. “Enigmatic and often confusing but beautifully shot. Loved the confessional scene and the girls on the dancing floor”.

“I’m getting the hang of this now – I am (or at least was) a mathematician, and rational by nature, so don’t pick up nuances.  That’s fine.  I know that I don’t know enough, so can just sit back and enjoy the images.  Stunning photography and locations, everything we were promised, and the light effects too.  I had now heard of Plato’s Cave, so it’s educational too.  Simples”.

“Beautiful cinematography, tremendous performances, potential repressed homosexuality, beautiful women who sit oddly in chairs, and a view on normality being the most unusual thing... this film potentially has it all. I've enjoyed it more as I've thought more about it”.

“This must have made slightly uncomfortable viewing for the Italian audience on its release if Clerici is supposed to be an Italian, upper middle class everyman, as he is revealed to be a hollow man, incapable of commitment or conviction, blowing with the wind both politically and personally. It is beautifully shot and fascinatingly designed with nods in many directions; expressionist cinema, Nazi architecture, Leni Riefenstahl, Futurist art and Salvador Dali amongst others. The use of reflections, dual viewpoints and layered imagery implying a queasy moral maze and the protagonist's equivocation, the triumphal architecture suggesting a Kafkaesque world of hidden machinations. Wes Anderson has been taking notes one suspects”.

“Despite at times struggling to follow the plot as it cut around, overall the film kept my attention from beginning to end. Not always sure what it meant or why things happened the way they did - why did four men appear in the woods to take turns stabbing the professor, why didn't Clerici help the woman who the day before he prepared to give it all up and go to Brazil with, why did he denounce his best friend at the end? I suppose the latter two examples just displayed his weakness of character as the conformist?”

“Great cinematography”. “What a load of rubbish! Another poor choice of film. Very disappointing”. “Jean-Louis Trintignant spoke such Italian! A little lengthy – beautiful settings and scenery”. “Powerful and well-acted”. “Strong performance from the lead actor”. “Not my sort of film”.

“Enigmatic but an interesting take on an underexposed area”. “Too many directors – politicking psychological trauma as source of corruption – forgetting egotism. Going somewhere but to! Many red herrings”.