Sam Neill stars in this tongue-in-cheek look at how one of the world’s largest radio telescope dishes, nestled in a community of sheep farmers, was utilised by NASA during Apollo 11’s mission. Based on true events, this celebrates the 50th anniversary of the first moon landing! 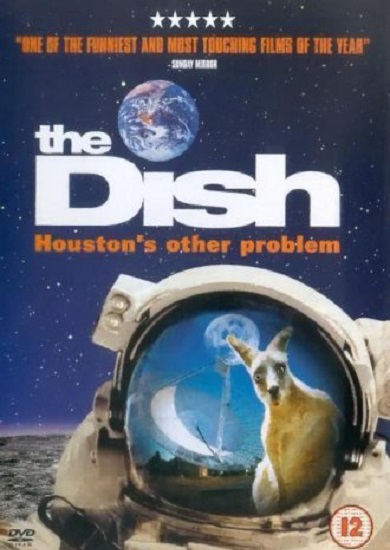 In a sheep pasture outside the little town of Parkes in New South Wales stands the pride and joy of Australian astronomy, a radio telescope the size of a football field. Most days it eavesdrops on the stars. In 1969, it gets a momentous assignment: relaying the television signals from the moon that will show Neil Armstrong's one small step for man, one giant leap for mankind.

Parkes is agog. This is the town's shining hour. "The Dish," a smiling human comedy, treats the moon walk not as an event 240,000 miles away, but as a small step taken by every single member of mankind, particularly those in Parkes. Resigned to thinking of themselves as provincials in a backwater, they're thrilled and a little humbled by their role on the world stage. True, NASA is relying on its primary telescope in Goldstone, Calif., and Parkes is only the backup--but still! Mayor Bob McIntyre and his wife, Maisie (Roy Billing and Genevieve Mooy), nervously prepare for visits from the prime minister and the U.S. ambassador. Out at the telescope, Cliff Buxton (Sam Neill), the imperturbable, pipe-smoking scientist in charge of the telescope, steadies his team. There's Glenn (Tom Long), the soft-spoken mathematician. Mitch (Kevin Harrington), in charge of keeping the equipment humming. And Al (Patrick Warburton), the American observer from NASA, whose black horn-rims and foursquare demeanor make him seem like Clark Kent. Patrolling the parameters of the site, prepared to repel foreign invaders and curious sheep, is Rudi the security guard (Tayler Kane), whose sister Janine (Eliza Szonert) is in love with Mitch and effortlessly penetrates Rudi's defenses.

Since we all know Neil Armstrong and his shipmates returned safely from the moon, "The Dish" can't develop suspense over the outcome of the mission. But it's a cliffhanger, anyway, through the ingenious device of making the movie more about Parkes than about the moon. The movie is "inspired by fact" (loosely, I suspect), but who can remember if the historic TV signals were relayed by Parkes or Goldstone? Since we've met the locals in Parkes, we're as eager as they are to have it be them.

But it won't be simple. Director and co-writer Rob Sitch (whose "The Castle" is one of the funniest comedies of recent years) intercuts the drama of the approaching moon walk with the drama of the momentous visit to Parkes by the prime minister and the ambassador. At the observatory, embarrassing technical problems pop up when the town blows a fuse. And at a crucial moment, high gusts of wind threaten to topple the telescope right over onto the sheep.

Sitch laces the moon walk and the local plots together so effortlessly that it would be unfair to describe his plot developments. I will be vague, then, in mentioning the visit by the U.S. ambassador, who arrives at the telescope at a particularly delicate moment, but leaves satisfied that he has at least heard Armstrong speaking from the moon.

There is also the inspired solution to another crisis, when Parkes "loses" the spacecraft after a power outage, and Glenn tries to find it with frantic mathematical calculations before the team hits upon a solution of stunning simplicity.

"The Dish" is rich in its supporting characters. I like the mayor's daughter Marie (Lenka Kripac), who has moved on from the sunny, idealistic 1960s and already embodies the sullen, resentful 1970s. I like the way Mayor Bob and his wife so cheerfully and totally dote on each other--and the way she tries to get him to use the upscale name "May" for her, when he's been calling her "Maisie" as long as he can remember. And the way Rudi the security guard is in fact the town's greatest security threat.

With "The Dish" and "The Castle," Sitch and his producing partner Michael Hirsh have made enormously entertaining movies. Perhaps just as importantly, they've made good-hearted movies. Recent Hollywood comedy has tilted toward vulgarity, humiliation and bathroom humor. Sometimes I laugh at them, even a lot, but I don't feel this good afterward. "The Dish" has affection for every one of its characters, forgives them their trespasses, understands their ambitions, doesn't mock them and is very funny. It placed second for the People's Choice Award at the 2000 Toronto Film Festival--after "Crouching Tiger, Hidden Dragon." That's about right.

This beguiling Australian movie is directed, co-written and co-produced by Rob Sitch, who was also responsible for 1997's underdog comedy The Castle. It's the true story of a team of boffins in Parkes, New South Wales in 1969 - led by Sam Neill as the reticent, pipe-smoking chief scientist - responsible for a gigantic radio telescope satellite dish. This is to be used as an "emergency back-up" for transmitting television pictures of the moon-landing if the main dish in California goes down, or if Apollo XI, for some reason, goes out of range.

But immediately after the landing, Neil Armstrong, mad with excitement for his great adventure, overrules NASA's sleep-break instruction: he and Buzz are going out right away. This means that the Australian dish will have to be hoisted into action to broadcast the all-important pictures. But a freak windstorm at that moment means that the entire dish structure could collapse - putting everyone under it in mortal danger. The Australian scientists and their American Nasa liaison realise that it is their duty to take the risk. Neil Armstrong walking out on the moon without any television pictures? An unthinkable calamity.

While never relinquishing its jaunty tone of comic likeability, The Dish almost assumes the air of an old-fashioned war movie: three Australian soldiers and their US commanding officer hold some pass or withstand some siege just long enough for reinforcements. For all this, and for its easy charm and innocence, The Dish is a very entertaining footnote to space history.

What you thought about The Dish

Thank you to the 129 people who joined us for the opening screening of the season, which was very well received. "Great start to the season - you dished up a treat"

In particular the humour and performances stood out to many commenters. "A humorous but also moving aspect of the moon landing - I enjoyed the mix of big and small stories". "Brilliant start to the season. Lots of tension, huge amount of humour, and a wonderful sense of a small community at peace with itself!". "Very enjoyable, a clear and interesting take on the moon landing. Good acting, understated humour, great music".

A number of people commented on the sound, particularly the dialogue which we will work at improving where possible. "Good to have a feel-good film to start the season. I found it a bit difficult to hear the dialogue at times and it would be nice to get the lip-synch right in future". "What can I say? Just a good film, well produced and appropriate humour. Found the sound a bit difficult at times. Most enjoyable". "Sound quality was poor unfortunately". "Great choice for opening film of the season. Loved the humour. Sometimes difficult to hear the dialogue???".  "Who knew? Fascinating story told with great humour. Pity so much of the dialogue was not clear. Amazing how they tracked it at all with such technology".

Overall many people relished seeing the moon landing and the triumph of the film. "A wonderful uplifting film. In our current torrid times a reminder of humanity's nobler efforts". "After recently seeing First Man it was great to hear the landing vocals and the 30 seconds of fuel from another perspective". "Great start to the new season. Great to see the moon landing 50 years late. Thoroughly enjoyed the experience". "Brought back memories. Brilliant". "Well depicted story of subtle humour. Great music. Good on ya Australia". "Very enjoyable. Brought back memories of that time. Liked the humour". "A very good start. Enjoyable, learned a lot".

In all, the story intrigued and fascinated many people. "In the 50th anniversary year couldn't be bettered - for strong acting, excellent direction and tension well developed with enough human story to emphasis great moments." "Very good film. Had me intrigued and wondering till the end, and it was funny!". "Excellent film to start the season. Loved the story, funny and poignant. Great soundtrack". "Very funny (in parts) warm and held my attention. Love the 'yellow' dress!!".

"I'd always wondered about this (carrier pigeons??) - Interesting topic :)"

"Almost understood the science - a human face on a technical masterpiece"

"Sadly I had trouble understanding what people said"

"Humorous treatment of what could have been a rather dry story"

"A really fabulous story that I hadn't known"

"And back where we finished last season, one once again ponders the similarity of films from the edges of empire - the tropes are comfortingly familiar whether from the pen of Forsyth or Waititi; pawky, colourful locals in a struggle which is resolved by mutual support and sympathy while cocking a snook at the authorities. This prevented from being too sentimental by the jeopardy of the Apollo mission and a timely reminder in these divisive times of when humanity seemed to achieve some kind of unity in the pursuit of a bold and risky venture. Beautifully played all round. (For a thrilling and moving re-use of the source material listen to Public Service Broadcasting's 'Race for Space')."

"A very good film with Lots of laughs, ( I first saw this film in about 2004  having been advised to watch out for it by my relatives in Melbourne)"