A tense claustrophobic thriller in which a police officer takes a call in an emergency call centre from a woman claiming to be kidnapped. A race against time to save her. 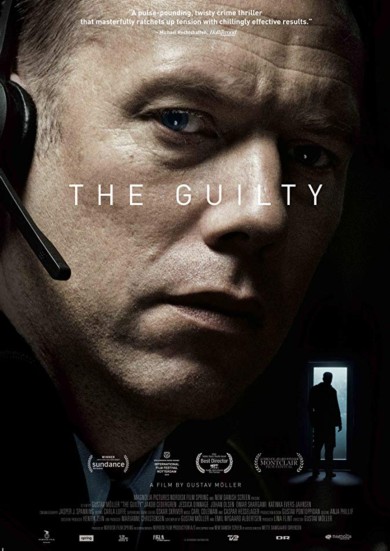 The Guilty review – so taut, you almost forget to breathe.

The sharpest film-makers realise that cinema is not just what plays out on the screen, it’s also what unfolds in the mind of the audience. Show the viewer everything, in some kind of premasticated slop of pictures and story, and you reduce them to passive consumers, chowing on movie comfort food. Invite them into the film as active participants, allow them to discover the picture from the barest bones of plot, and they will love you for it.

It’s a lesson that that first-time feature director Gustav Möller has learned early and learned well. His superb, multi-award-winning debut, The Guilty, is a masterclass in wringing breathless tension from just a few key ingredients. The film takes place in two rooms, and the story unfolds in a series of phone calls. A police officer temporarily assigned to emergency dispatch duty takes a desperate call from a kidnapped woman. The 75 minutes that follow are so taut, that you almost forget to breathe.

The “less is more” message is one that bears repeating. The potential scope and ambition of cinema as a medium is immense. It is limited only by imagination, the special effects budget and perhaps the laws of public decency. However, something interesting happens when you start to impose restrictions. Film-makers are forced to use their wits, rather than their toolkit of effects and gimmicks.

It’s a theory that has regularly been embraced by Möller’s Danish compatriate, Lars von Trier, who is perhaps the most enthusiastic fan of creative self-flagellation in the business. He was an originator of the Dogme 95 “vow of chastity”, which urged film-makers to strip their art down to its basic ingredients (the rules included no score, no effects, no added lights, handheld camera only, no genre movies) in order to focus on story and performance.

The Guilty wouldn’t pass the austere Dogme criteria – it is lit and photographed conventionally and carefully. And the meticulously crafted sound design, particularly the punctuating moments of silence and stillness, is essential for its success. But the film’s narrow visual focus – much of the drama plays out in the face of police officer Asger Holm (Jakob Cedergren) – accentuates the crackling cleverness of a screenplay that allows us to unravel a mystery in real time.

Within this movement to whittle down movies to their essentials – a cinema of limitation, if you will – there is a sub-genre that anchors the action to a single means of information transfer. Computer screens, as used in Aneesh Chaganty’s Searching and Timur Bekmambetov’s Isis online grooming thriller Profile, are increasingly popular. But The Guilty, with the telephone as its core tool, has more in common with films such as Joel Schumacher’s Phone Booth and, particularly, with Locke, in which during a two hour car drive and 36 calls Tom Hardy squeezed every last drop of panicked perspiration out of a real-time marriage breakdown coupled with unexpected forays into concrete engineering. The Bafta-winning short film Operator, by Caroline Bartleet, also deserves a mention and is definitely worth seeking out for six minutes of almost unbearable tension.

The raw-nerve jangle that this thriller delivers is partly thanks to a screenplay, co-written by Möller and Emil Nygaard Albertsen, which is as clever as it is deft. Steering clear of swampy patches of exposition, it’s a thrillingly lightfooted approach to storytelling that gives us just enough to work with in order to shape our own suspicions and conclusions. But a crucial part of the picture is Cedergren’s tinderbox of a performance. Police officer Holm has been taken off the street pending a formal investigation, which is scheduled for the following day. From his brusque manner it seems he feels the emergency phone operator work is beneath him. But there’s something more than that. A brief, jovial chat with a former colleague from the city beat leaves him hollowed out and deadened. The camera creeps towards him as he stares, unseeing, at his desk and catches the glint of a tear in his eye.

For reasons that eventually become clear, Holm very much needs to be a hero right now. When he answers a sob-choked call from Iben (voiced by Jessica Dinnage), phoning covertly from her ex-husband’s van, Holm grabs at the chance to redeem himself. Without giving away too much – this is a film that plays best when you know the least – the dexterous reveals and twists land like a punch to the gut.

Review: In ‘The Guilty,’ drama unfolds in a single location, but it contains multitudes.

If the setting of “The Guilty” couldn’t be simpler, its immaculate execution by first-time director Gustav Möller couldn’t be more gripping and involving.

Like 2014’s Tom Hardy vehicle “Locke,” “The Guilty” is a single-location film that consists almost entirely of a series of telephone conversations that get increasingly complex and unexpected.

A precise, sure-handed filmmaker, Möller not only believes that “the strongest images in film, the ones that stay with you the longest, they are the ones you don’t see,” he has the skill to convince us as well.

Working with co-writer Emil Nygaard Albertsen, Möller has set his film in the police emergency services control room of a large city — unnamed, though presumably Copenhagen.

The first sounds we hear, not surprisingly, are ringing phones. The first image we see in Jasper Spanning’s taut cinematography is the close-up of an ear with a telephone earpiece firmly in place.

On dispatcher duty this evening is officer Asger Holm, played with an impact that gradually overpowers you by top Danish actor Jakob Cedergren.

Asger, it’s clear almost immediately, is not business as usual as a dispatcher. When people call in for help, he is as likely as not to give them a sarcastic hard time for getting drunk or being in the red-light district in the first place as he is to send help.

Cedergren has given Asger a stern, rigid visage, presenting him physically as well as verbally as an uncompromising moralist with a sense of mission, someone who has no doubt he knows right from wrong.

That doesn’t mean, however, that he can’t be disturbed or unsettled, as he is by a call on his personal mobile from a journalist who asks him if he has any comments on his court date the following day.

What becomes clear is what we could have guessed: dispatcher is not Asger’s regular beat. He has been temporarily assigned there pending the outcome of that legal proceeding, the cause of which we gradually learn more about.

All this is merely the setup for the main event. The phone rings again and on the line is no disoriented drunk but someone whose situation will change the nature of Asger’s night, maybe even of his life.

The caller is Iben (Jessica Dinnage), a woman who sounds like she is talking to her young daughter.

Asgar quickly catches on that Iben is talking to him in a kind of code, trying to convey that she is in trouble without coming out and saying it, and he helps her along by asking a series of yes or no questions about her situation.

What he discovers is that Iben is in a car being driven by her ex-husband and being taken somewhere very much against her will.

Alive to all the grim possibilities a kidnapping presents, the moralist in Asger tries to piece together what is going on, bending heaven and earth to do the right thing for this endangered woman.

It can’t be over-emphasized how carefully screenwriters Möller and Albertsen have constructed this story, doling out information sparingly, on a need-to-know basis, letting their plot purposefully unroll like a ball of twine.

As that is happening, “The Guilty” is ratcheting up both the level of tension and our worry for the people involved as the nature of the unexpected kinds of jeopardy they are involved in gradually becomes clearer.

Helping in this is the superior nature of the performances, starting with star Cedergren, who brings startling nuance and expression to the tight close-ups that dominate the film.

But “The Guilty” wouldn’t succeed as well as it did without the complex editing of Carla Luffe and the involved voices of those who engage Asger on the phone, starting with costar Dinnage but including Johan Olsen and Omar Shargawi in key supporting roles.

One of “The Guilty’s” more potent elements is its emphasis on Asger’s genuine passion for police work. “We’re protection, we protect people who need help,” he says on the phone at one point, and his sincerity is never in doubt.

How that belief, that sense of purpose, interacts with the real world in this twisty story — and whether things will work out the way those on the screen or in the audience expect — is the heart of this very fine film. It’s a heart that beats as strongly as anyone could hope for.