A 90 year old veteran responds to his money troubles by smuggling $3M worth of cocaine for a Mexican drug cartel. A return to the GFS screen by Clint Eastwood who directs and stars. 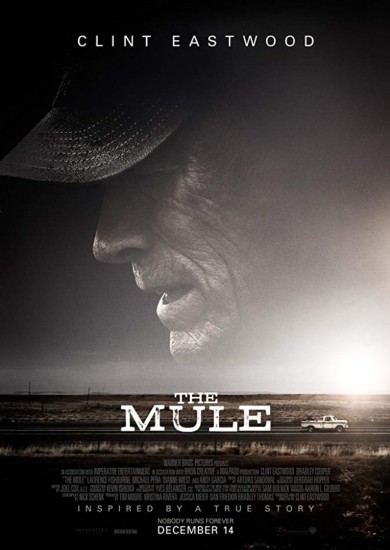 The Mule review – crime in the slow lane.

Clint Eastwood plays a drug mule for a Mexican cartel in a watchable but plodding film.

You could argue that The Mule, the latest film from Clint Eastwood, is a perfect match of directing style and material. Ninety-year-old Earl Stone (Eastwood, in his first lead role since Gran Torino) has spent a lifetime driving across America, and has not accrued so much as a single speeding ticket. He’s a safe pair of hands on the wheel. So safe that the Mexican cartel that employs him as a drugs mule is willing to overlook his age and his unscheduled detours. Eastwood’s approach to the material is similarly solid and leisurely. The film, which is based on a true story, chugs along like a Sunday driver taking the scenic route. It’s perfectly watchable but a film with this puttering pace is never going to get the blood racing.

Earl is a man who in trying to correct his past mistakes makes other, far bigger ones. He chose his work as a horticulturist over his wife and children. In a neat irony, he specialised in day lilies, the most ephemeral of flowers, while assuming that his untended family was permanent. He’s a man out of his time, bamboozled by technology and prone to inadvertent racism. And while Eastwood is more self-aware, there’s a sense that, in his approach to sexual politics at least, he too is a man who is rather detached from contemporary mores.

The minor-key Clint Eastwood drama The Mule presents all that’s comforting and limiting about the 88-year-old director’s classical storytelling approach. Inspired by the true story of a nonagenarian who became a drug mule for a dangerous cartel, the film relies on Eastwood’s weathered, easy-going charm as the titular driver desperate for money — even if it means risking imprisonment or worse.

Eastwood is critical of his protagonist, undercutting our sympathy with an acknowledgement of Earl’s selfishness

As with his other recent movies, the Oscar-winner favours sentimentality over subtlety, and yet The Mule resonates because of its straightforward look at America’s crooked War on Drugs, as well as its portrait of a flawed, aging man running out of options and second chances.

The Mule represents Eastwood’s first starring role since 2012’s Trouble With The Curve ($49m worldwide) and the first time he’s toplined one of his own features since 2008’s Gran Torino ($270m). Fans will be intrigued when the film opens December 14 in the US and January 25 in the UK, but The Mule’s slow-burn, melancholy narrative may keep this Warner Bros. release from being a major commercial player.

Eastwood plays Earl Stone, a Midwestern horticulturalist who is so devoted to his flowers that he’s neglected and alienated most of his family, including his ex-wife Mary (Dianne Wiest). But with his business failing, and foreclosure looming, Earl receives an unexpected proposition: How would he feel about driving cross-country to drop off packages in duffel bags? He’ll receive substantial sums for his efforts, but he has to obey his employers’ orders to the letter — and he can never look in the bags.

It becomes quickly obvious that Earl has been hired to be a drug mule, and one of The Mule’s more interesting aspects is that this elderly man doesn’t really question the legality of this work. From Earl’s perspective, bills need to be paid, a granddaughter’s wedding needs to be financed, and failing community institutions could use the financial help — as far as he’s concerned, he’s participating in a victimless crime.

That’s not the perspective shared by Colin Bates (Bradley Cooper), an ambitious Chicago DEA agent trying to crack down on this cartel —  if only he can figure out who’s transporting their drugs. The Mule milks the irony of the cartel hiring an older white man for this job: Bates and his partner (Michael Peña) are so busy looking for young Mexicans that they never suspect that this grizzled grandpa is their man. Nick Schenk’s screenplay, based on an article by New York Times journalist Sam Dolnick, gives these men’s investigation a calm procedural pace, but it’s also clear-eyed about its inherent racism.

Eastwood hasn’t stepped in front of the camera much this century, and when he does he tends to play last-of-a-dying-breed men who are more virtuous than their younger cohorts. Such self-aggrandizement can be tiresome — especially in Gran Torino, where the character’s xenophobia was treated as adorable — but in The Mule, Eastwood is more critical of his protagonist, undercutting our sympathy with an acknowledgement of Earl’s selfishness.

The movie also demonstrates how Earl’s white privilege allows him to navigate around law enforcement in ways that his Mexican counterparts cannot. There’s an unspoken bitter juxtaposition coursing through the narrative: Earl has fouled up his excellent life through his own foolishness, while the lower-working-class cartel underlings around him have never had the opportunities he’s thoughtlessly wasted.

To be sure, neither Earl’s story nor the investigation to ensnare him is particularly riveting. But the narrative’s unhurried confidence, plus the novelty of Earl’s immersion in this unfamiliar world, keeps The Mule moving along. (And the supporting performances, including from Andy Garcia as a drug kingpin, have a modest authority to them, even when the roles are underwritten.)

As he gets close to 90 himself, Eastwood views Earl as an almost tragic everyman who no longer recognizes his place in the modern world. Retaining the wry sense of humour and minimalist acting style that have endured over the past 60 years, Eastwood carries the film’s themes gracefully enough — particularly the notion of an aged man coming to the end of the proverbial road. And while this defiantly unflashy film may similarly feel out of step, long on mawkishness and short on dynamic, arresting moments, the purity of its gently mournful tone stays with you.