From director of “Of Horses and Men" this charts a woman's lone eco-warrior battle against big business. Halla leads a quiet life, but her upbeat exterior hides a secret double life as a committed activist. 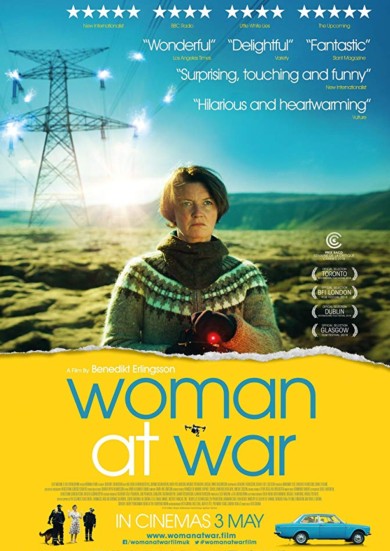 A delightful follow-up to “Of Horses and Men” about a modest environmental activist determined to bring down heavy industry one electric pylon at a time.

Is there anything rarer than an intelligent feel-good film that knows how to tackle urgent global issues with humor as well as a satisfying sense of justice? Look no further than “Woman at War,” Benedikt Erlingsson’s gloriously Icelandic (for lack of a better adjective), near-perfect follow-up to “Of Horses and Men,” featuring an environmental activist modestly taking on the world, one electric pylon at a time. Commentators will be tumbling over themselves trying to define what kind of movie this is: comedy, musical, social drama, politically correct issue film. It’s all those except the last; political correctness implies one-dimensional preaching that narrowly cuts off conversations, whereas, whereas “Woman at War” deftly centralizes a profound humanity from which vital issues are comfortably suspended. Bound to be one of the hot sellers at this year’s Cannes, the film is likely to do bang-up business worldwide.

“Of Horses and Men” deliciously played with narrative conventions even as it astonished with pictorial surprises that continue to induce smiles five years later. Erlingsson’s sophomore feature tells a more straightforward story yet here too he invents unexpected visual pleasures, in the form of three musicians (Davíð Þór Jónsson, Magnús Trygvason Eliasen, Ómar Guðjónsson) and three Ukrainian singers (Iryna Danyleiko, Galyna Goncharenko, Susanna Karpenko) who appear in key moments on screen as melodic commentators, fellow conspirators, and sympathetic bystanders offering accompaniment to some of the action. Their appearances pierce through the fourth wall in ways that respect both the characters and the audience, which is just one of numerous delightful feats in this mature crowd-pleaser.

In town, Halla (Halldóra Geirharðsdóttir) is a popular 49-year-old choir director, her sun-filled smile warming everyone she meets. In the countryside, she’s what the press have nicknamed “Mountain Woman,” an anonymous figure using a potent bow and arrow to bring down power lines in a one-woman crusade against heavy industry. The only one who knows her identity is Baldvin (Jörundur Ragnarsson), a chorus member and official in the ministry who’s been helping out with information but is getting extra nervous as the government backlash grows now that the Chinese are reconsidering their investment in Iceland.

It’s just now that a letter arrives telling Halla that her application for adopting a child from Ukraine has been accepted, and while it’s not an ideal moment, she’s overjoyed that her dreams of motherhood will finally be realized. Identical twin sister Ása (also played by Geirharðsdóttir) is delighted for her sibling, though she’s just agreed to join an ashram in India for two years. Pairing these two together seems like such an obvious script gimmick, yet apart from the eternally amusing conceit of identical twin sisters on film, the yin-and-yang works perfectly: Both idealists, Halla looks to save the world, while Ása looks for inner fulfillment.

After Halla drops leaflets around town declaring her environmental motivations, the government begins a spin war to win public opinion, unleashing commentators on the media while increasing the manhunt. Worth singling out among many marvelous sequences is a scene when Halla walks down the street, glimpsing TVs through one window after another, all of them blaring official propaganda that then melds into chatter-like music as she quickens her pace, becoming all the more determined to take a final stand against industry before heading to Ukraine and picking up her adopted daughter. Helping her escape capture is sheep farmer Sveinbjörn (Jóhann Sigurðarson), a classically Icelandic character whose gruff exterior can’t disguise his compassionate nature.

Thematically, “Woman at War” sounds so easy: a righteous topic, a sense of solidarity for the things that count, a satisfying stand by one woman against the powerful forces of industry. Erlingsson’s genius lies in how he puts it all together with such witty intelligence, arranging beautifully shot picaresque episodes around a central figure who lives the ideals of the heroes she has hanging on her wall, Mahatma Gandhi and Nelson Mandela. The adoption subtheme is a crucial element in it all, as it concretizes her role as mother and caretaker, one small country, one small child at a time.

Grounding everything is Geirharðsdóttir’s splendid performance(s), fleshing out Halla’s character as a grassroots Robin Hood with warmth and quiet determination. Juan Camillo Roman Estrada makes a welcome comeback from “Of Horses and Men” as a luckless Spanish-speaking tourist whose foreign-ness makes him an instant target of police suspicion in the insular Icelandic countryside. All three musicians, playing piano, accordion, trumpet, tuba and percussion, contrast detached yet supportive glances with an almost organic presence in each of their scenes, while the Ukrainian singing trio, on the one hand out of place, lend a sense of global cohesion with their distinctive harmonies.

As he did with Erlingsson’s previous feature, Bergsteinn Björgúlfsson again proves himself a master of capturing the tranquil beauty of the Icelandic landscape, ultra-sensitive to lighting (color grading is also superb) and the joys of the unexpected. When Sveinbjörn gently immerses Halla in a hot spring, shown from above on camera, it’s hard not to have a similar feeling of relief, and when she lies her face down in the flowering undergrowth, we enjoy a similar connection to nature. Sound design is also flawless.

Woman at War review – the mother of all green goddesses. Halldóra Geirharðsdóttir is brilliant in this jet-black comedy about a woman fighting to save the planet and adopt a child at the same time.

To describe Benedikt Erlingsson’s sense of humour as “dry” is a bit like saying that things can get “chilly” as we get up towards the Arctic circle. Having conquered the theatre stages and TV screens of Iceland as a writer, director and performer, Erlingsson turned to feature films in 2013, where his brand of deadpan tragicomic humour once again struck a national nerve. His directorial feature debut, Of Horses and Men, earned several Icelandic academy Edda awards as it veered from quirky observation to bleak contemplation via a string of arrestingly surreal vignettes including an accidental human/equine three-way, and the sight of someone being pulled out of the body of a frozen horse.

Like its dramatic predecessor, Erlingsson’s latest offering was Iceland’s official submission for the foreign language film Oscar, although it once again failed to make the shortlist. (To date, Children of Nature by Friðrik Þór Friðriksson, who produced Of Horses and Men, remains Iceland’s only nomination in this category.) Yet amid the jet-black comedy of Woman at War, which takes as its catastrophic subject matter the despoliation of planet Earth, there is a warmth, wit and wisdom that transcend national and cultural boundaries, making this a truly universal treat.

We open amid the breathtaking beauty of rural Iceland, spectacularly captured by cinematographer Bergsteinn Björgúlfsson, who worked such strange magic on Of Horses and Men. Here, an eco-warrior battling big industries under her “Mountain Woman” alias fires an arrow over a power line, causing electricity cuts and short-circuiting government plans to build a new aluminium smelter. This is Halla, a bike-riding environmental guerrilla, magnificently played by Halldóra Geirharðsdóttir, who combines the athletic physicality of Tom Cruise’s Ethan Hunt with the kaleidoscopic character depth and subtlety of Liv Ullmann or Greta Garbo.

When not secretly holding heartless industrialists to ransom, Halla leads a local choir, producing harmonious songs that offer a choral counterpoint to the increasingly discordant strains of modern life. But along with saving mother Earth, Halla is also in the process of attempting to adopt a child, a lengthy procedure brought to an unexpected head when a Ukrainian orphan finds herself in dire need of a home. Can Halla continue to wage environmental war while taking on the mantle of loving mother? Or will the authorities catch up with her clandestine activities before she gets to fulfil her dreams?

Aware of the “festival favourite” label that was attached to Of Horses and Men, Erlingsson has sardonically described Woman at War as a “mainstream blockbuster story for everyone kind of film… a heroic tale set in our world of imminent threat”. It’s a playful description of a subversive romp that splendidly overturns action-movie cliches, putting a DIY twist on Mission: Impossible riffs, presenting its life-or-death struggles in thrillingly offbeat fashion.

Erlingsson cites real-life environmentalists such as Berta Cáceres and Yolanda Maturana as inspirational figures, but his story has a more mythic feel, incorporating fable-like elements casting Halla as Artemis, Greek goddess of the wilderness. That timeless theme is brilliantly emphasised by Erlingsson’s adventurous use of on-screen musicians, whose incidental accompaniments serve as a kind of Greek chorus, mediating between the action and the audience. There’s a circus-like element to the three-piece band that follows Halla on her quest, drums, accordion and sousaphone at the ready. Like escapees from the 2015 documentary The Show of Shows (which Erlingsson made in conjunction with Sheffield’s National Fairground and Circus Archive), this rag-tag band seems to embody the sound of Halla’s warrior instincts. In contrast to its tense, rhythmic alarums, a keening Ukrainian choir offers melancholy counterpoint, instruments and voices (male and female respectively) dramatising the different elements of our heroine’s divided soul. How fitting that Halla should have a twin sister, further emphasising her dual nature.

While Erlingsson acknowledges the theatrical effect of seeing out-of-context instruments played on rooftops and mountainsides, or finding colourfully head-dressed singers serenading characters on lonely roads, there’s actually nothing distancing or alienating about this dramatic device. On the contrary, I found myself drawn deeper into Halla’s world by the presence of her muses, becoming even more immersed in her mission as nail-biting tension dances with absurdist invention.

Geirharðsdóttir commands the screen throughout, but she receives significant support from Jóhann Sigurðarson as Sveinbjörn, the gruffly avuncular sheep farmer who lives alone with his dog, Woman. In a country where practically everyone is a cousin, Sveinbjörn forges a unexpected bond with Halla, one that is as moving and embracing as this weirdly beautiful film itself.