A comedy of manners based on a novel by Stephen Fry. It centres on failed theatre critic Ted (a tour de force by Roger Allam) who sets out to investigate a series of miracle healings at a country manor. 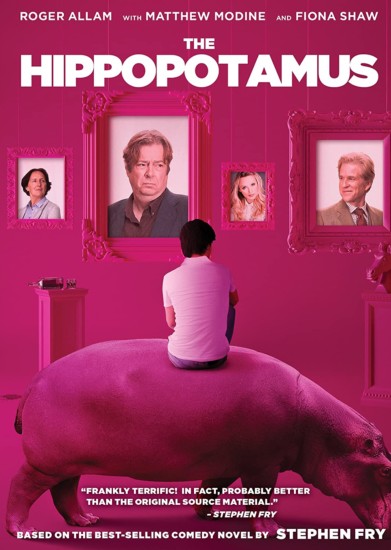 This adaptation of Stephen Fry’s comic novel about an ageing alcoholic and his apparently miraculous godson relies so heavily on voiceover that it’s practically an audiobook. Roger Allam plays Ted Wallace, a pompous, washed-up ex-poet turned theatre critic who receives a strange assignment from a terminally ill woman. He must go to Swafford, the country pile owned by his estranged old friend Lord Michael Logan (Matthew Modine with a bizarre accent), and investigate reports that the Lord’s son David (Tommy Knight) has mystical healing powers.

The supporting cast of British luvvies here is lively – Fiona Allen, Tim McInnerny and Russell Tovey all pop up in minor roles – but the script is just dull, regurgitating Fry’s book in the most lumpen, unimaginative fashion. Oddball plot twists that might have seemed fresh and surprising on the page – such as the final explanation of David’s mysterious powers – just come across as crass and silly when spoken aloud, while Allam’s horribly overwritten stream-of-consciousness narration sounds like the boozy ramblings of a judgemental creep. All in all, a most unlikeable film.

Jonathan Pryce in Dough, Roger Allam here – it’s a week of under-filmed performers lending gravitas to light-middleweight material. John Jencks’ adaptation of the Stephen Fry novel is all Allam, all the time: when not grousing in voiceover, he can be witnessed sniping, letching and harrumphing in person as Ted Wallace, a blocked poet-turned-soused critic drawn into an altogether wonky country house mystery.

It’s a slight limitation that neither Wallace nor the audience really knows what he’s investigating – we’re mostly watching Allam scowling at the eccentrics passing through his eyeline – but it’s still a pleasure, and often a joy, to watch the star measuring out and savouring Fry’s rich wordplay like fingers of scotch. Even when the plotting gets clotted come the final reel, all that’s required is for Allam to open his mouth to dispel any nonsense or mediocrity: has there ever been an actor better suited to delivering despairing “Fuck me”s?

What you thought about The Hippopotamus

88 members and guests attended this screening. Although it is easier to leave your response to the film, only 8 did so.

From the screening of "The Misfits" we will be leaving response slips out around the hall for you to fill in. Of course you may still leave a response online also.

"Roger Allam is one of my favourite actors, often on radio with his very distinctive voice, always with brilliant comic timing, usually portraying a world-weary figure working in the arts or politics.  An excellent choice for a huge part, often using voiceover as narration.  Shades of Poirot usefully employed at the end.  Fiona Shaw fantastic as ever - perhaps the the only acting weakness the godson himself.  Sound and vision both high quality, and the story itself, being lightweight, made for a relaxing and funny evening’s entertainment.  Not every GFS offering has to be Worthy!

…and if you enjoyed listening to Roger Allam last night, seek out “Conversations from a Long Marriage” on BBC Sounds, a series of two-handers he does with Joanna Lumley"

"A rather silly plot, but entertainingly played by a fun cast. Roger Allam is always good value".

"I have not read the book, luckily I suspect. As a film it works rather nicely. Densely packed (due I'm sure to having to shoe-horn in as much of the book as possible) and rich in talented cast members bouncing off each other to good effect. Allam is the pick though, at his most Gambonesque and making masterful, robust, use of Fry's veritable volcano of vital, varied and volatile verbiage. I would like to think both writing and setting owe something to Viv Stanshall's similarly richly verbose 'Sir Henry at Rawlinson's End'; Fry will undoubtedly have heard it. It has plenty of decent jokes and an inventive and unpredictable plot. What's not to like (apart from the one bum note: Matthew Modine who seems to have no idea what film he's in)? Thoroughly enjoyable"

"A very entertaining film; the plot, incidental! Roger Allam plus Stephen Fry's language is the delight and main feature of the film. At times the dialogue would have seemed very pretentious but it illustrates Fry's love of the English language and how to use it to maximum effect".

"Pretentious, pompous, self regarding, cliched claptrap"