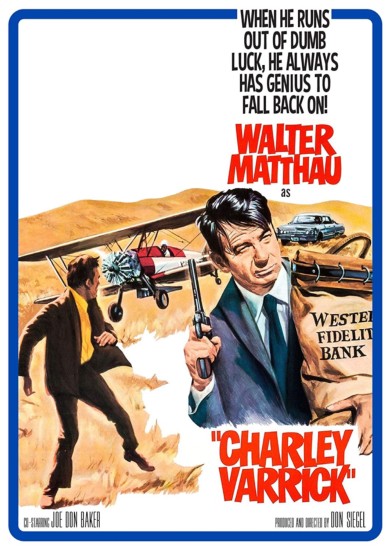 "Charley Varrick" and Don Siegel: The Last of the Independents.

Why hasn't Don Siegel received his due recognition as an important American filmmaker? He certainly directed his share of influential films (e.g., Dirty Harry) and socially significant ones (e.g., Invasion of the Body Snatchers). And yet, although acclaimed in Europe, he lacks the auteur status bestowed on contemporaries such as Sam Peckinpah. It's a puzzling question, made even more perplexing when one considers Siegel's underrated gem Charley Varrick.

Made in 1973, Charley Varrick stars Walter Matthau as the title character, a crop duster who makes ends meet by robbing small-town banks. When a patrolman recognizes a stolen license plate, one of Charley's robberies goes horribly awry, resulting in three fatalities. Charley and his lone surviving gang member, the dim-witted Harman (Andrew Robinson), discover their bank haul amounts to $765,000. Harman is thrilled; Charley is not. He realizes immediately that they robbed a bank used by the mob. It's not long before the police, the FBI, and a mob hit man start looking for Charley and Harman. Their challenge, though, is that they underestimate the resourceful Charley, who methodically anticipates their every move.

Charley Varrick is a prototypical Siegel anti-hero. He's a criminal, though his motives are driven by a poor economy. He never kills anyone, although he indirectly leads the hit man to Harman when he realizes the latter has become a liability. He is morally dubious, but "better" than the ruthless hit man and corrupt bank officials. In a sense, Charley is not dissimilar from Harry Callahan in Dirty Harry--who bends the law mightily to enforce it. Another similarity is that both men work outside the system, a point emphasized by the slogan on Charley's business signs: "The last of the independents" (which was the original title of the film). However, there remains a key difference between Charley and Harry--they are on opposite sides of the law.

With an anti-hero at the heart of the film, it's essential to cast an actor with some degree of audience appeal. The gruff, likable Matthau fits the bill perfectly, somehow coming across as curmudgeonly and cold. The bottom line is that, despite his significant moral flaws, it's easy to root for Charley because we admire his ingenuity--and because he's played by Walter Matthau.

Siegel directs Charley Varrick with remarkable efficiency. The title credits roll over the same New Mexico town where the robbery occurs: farm workers whistling at a pretty girl; kids playing in a sprinkler; a patrol car cruising down a lonely highway. By the time Siegel's directing credit appears, we already have a feel for the locale, its residents, and the economy. Another example of Siegel's visual brevity is when he shows a close-up of Charley's hand as he slides a wedding band off the body of the female driver of the getaway car. He places the ring on his pinkie, next to a matching band. In one short sequence, Siegel has conveyed that Charley was married, he loved his wife, and must now cope with her death in addition to his self-created mess.

Despite its craftsmanship, Charley Varrick is occasionally sloppy around the edges. In a minor miscue, the plot has Charley sleep with the bank boss's pretty assistant. It makes no sense for either character. She's going to make love with a stranger that stalked her and broke into her apartment? He just lost his wife, but is ready for a one-night stand?

To fully appreciate Charley Varrick, though, one must accept such sporadic missteps. Overall, it's a first-rate action film with a well-cast, interesting protagonist. It makes a strong case for re-evaluating Don Siegel's filmography and recognizing him as a creative force in American cinema from the 1950s through the 1970s.

One of the few truly great American-made heist movies of the 1970, thanks to a combination of successful elements. First and foremost, there's the craftmanship of director Don Siegel, who takes a break from Clint Eastwood after four subsequent collaborations and easily manages to transform comedian Walther Matthau into a stern action anti-hero. Secondly, there are the stellar performances, from the aforementioned Matthau, but also from three giants in cool roles, namely Joe Don Baker, John Vernon and Andrew Robinson. Then we have the thrilling screenplay adapted from the novel "The Looters" by John Reese. Charley Varrick runs an unprofitable New Mexican crop-dusting business, but is a petty criminal on the side. Together with his wife and two companions, he plans for a modest bank robbery in a small town, but quickly realizes they are in big trouble when the loot turns out to be a massive sum that belongs to the mafia. Lastly, the film balances perfectly between suspenseful thriller and exhilarating action, with also bright flashes of subtle humor and parody. There's great suspense throughout, as well as intriguing characters and smart dialogues.

I referred to it twice already; the strongest asset of "(Kill) Charley Varrick" are the genius character drawings. Varrick himself is an intelligent and careful thief, but he isn't the robust type of action hero, which is aptly showcased in the sequence where he hides outside his trailer whilst his accomplice is in mortal danger. John Vernon supposedly depicts a heartless mafia bookkeeper, but he makes his character quite human, as illustrated via the "girl-on-the-swing" scene and the conversation with bank director Harold Young (an amazing scene!). Last but not least, the phenomenal Joe Don Baker as the mafia hitman Molly. Just as you shouldn't judge a book by its cover, you shouldn't judge a hitman by his first name. Molly is, hands down, one of the most merciless, intimidating and unpredictable villains of the 70s.

There's only one default that really annoyed me about this film, although I reckon it's also a disease of the era of its release, and that's the complete lack of strong women. The top-billed female protagonist (Felicia Farr) only appears briefly and immediately shares the bed with a perpetrator, another woman (Sheree North) caresses a man who slaps her in the face, and a third one is just a noisy old neighbour.

What you thought about Charley Varrick

62 members and guests attended this screening of Charley Varrick. We had 22 Responses, a 35% response rate which delivered a Film Score of 4.09. The collected comments are below.

“I enjoyed Charley Varrick, and was pleased that GFS had selected a Walter Matthau film, as I'd seen very few of his many films.  This is a lesser-known one, and the better for that; undemanding cops-and-robbers stuff, but well-made and with enough twists to maintain the interest right to the end.  The director convinced us to root for the baddie - how? - by making everyone else worse, or just dumb.  The smart/lovable scoundrel wins out in the end (although I'm not convinced the mafia would have given up!).  There was some dialogue that was difficult to follow, although subtitles throughout would have been a distraction.  Well-made and directed, and Matthau a great exemplar of his craft”.

“Entertaining and easy to follow - not sure why Walter Matthau struggled to get it....unless I was missing something?! Thanks”.

“There is a curious period in American cinema in the late sixties and early seventies when the new kids appear on the directorial block, new styles sell well (especially Bond one suspects) and certain genres (Westerns in particular but the hard boiled thriller here) feel the need to sprinkle a bit of the zeitgeist and lazily slop on some hippies, hot pants, casual sexism and frankly peculiar and unconvincing sex. If there is a problem here: that is it. Which is a shame as it mars an otherwise gritty, twisty, sweaty and tense noir thriller. Matthau is an inspired choice as the grim realist (if not as a hard man and certainly not as a lothario) supplementing his meagre income with a little light bank robbery but with the smarts to stay half a step ahead of Joe Don Baker's terrifyingly relaxed and cheerful hitman. The plot doesn't miss a beat and echoes and equals 'Point Blank' and 'The Getaway'. And who doesn't love a classic seventies smash up - cars the size of ocean liners ploughing into each other with police sirens whining? Tremendously good if you can forgive the attitudes of an era long past”.

“Very clever. I enjoyed it”. “Terrific – even on the umpteenth viewing – it still grips”.

“Enjoyable caper”. “Great fun! Walter Matthau has a certain ‘style’ and I love the way he delivers his lines”.

“Bonkers but entertaining”. “A bit dated but Walter Matthau was excellent”. “It’s OK“. “It was well made and the lead actor was great. But a bit dated and not just the sort of film I enjoy”.

“Not my sort of film but slick, with clever twists and brilliantly choreographed stunts”.