In this engaging black comedy, a series of mysterious events change the life of a pianist who unwittingly becomes embroiled in the murder of a former film actor. 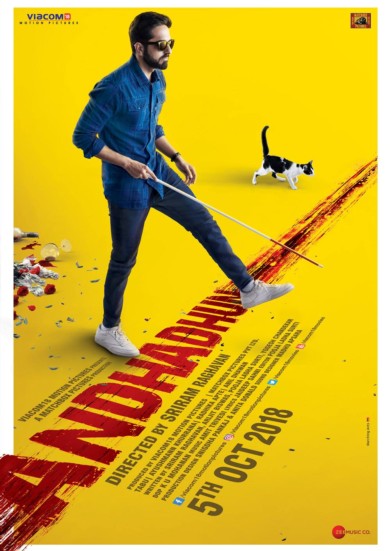 Everybody knows how a mystery should work. In Andhadhun, even a sweetly officious old lady prodding a policeman at a funeral, urging him to question the widow about a suspicion, has a clear idea of how he should conduct the enquiry. “Casual, casual,” she entreats with a hissed whisper, as if she has done this before and knows better. Or, at the very least, as if she has watched enough films to warn her against the contrary.

It has become harder to make mystery movies because audiences have watched too many and, like spoilsport children around a birthday party magician, now make a game out of spotting sleight of hand and loudly predicting the next twist. This is why we need directors who refuse to be obvious. This phenomenal new thriller from Sriram Raghavan pulls off its tricks in plain sight. Everybody knows how a mystery should work, but Raghavan knows how all the mysteries work.

The film’s leading man, Akash (Ayushmann Khurrana), wears an old-fashioned watch which allows him to elegantly pop open the glass face — like in a pocket compass — when he needs the time, so he can feel up the hour and minute hands. This is precisely how Sanjeev Kumar told time in the 1986 thriller, Qatl, about a blind man accused of murder. Akash, a piano player, was not born blind but tells us he lost his eyesight when struck by a cricket ball at the age of fourteen, which is, importantly, old enough for him to have been inspired by a rerun.

Whether Akash is genuinely blind is not the question — or, at the very least, not the most important of questions. The film plays with the idea of sight, as some people find themselves blindfolded, while others wear masks to try and emulate the sightless ‘focus’ of which Akash boasts. Who is blinder: the one who can’t see or the one who chooses not to?

And how does one gesticulate in front of a blind pianist? Simi (Tabu), the woman standing in front of Akash, is annoyed. She is irked first at her husband, for trying to surprise her on their anniversary, and then at this young piano player, who is one of her presents, and finally at herself. She moves her hands first too much, as if overcompensating, then self-consciously too little, and sighs with exasperation as she stares hard at him.

All this while, Akash — like Raghavan — plays on. The tinkling of the grand piano frequently washes over the noiseless actions of this film but seems also to dictate its momentum, like in the classic Tom & Jerry cartoons where elaborate farce was set to orchestral music. This is what gives Raghavan’s relentless, absurdly poetic thriller its wings, the fact that we are breathless because of anticipation but also because of having laughed too hard. Andhadhun is a rare treat, a film so compelling that it may universally be considered irresistible. The theatre howled in unison. This is as it should be. We must remember Alfred Hitchcock made funny films.

This is a damnably hard film to write about without giving some games away. I can tell you the characters are phenomenal. A policeman, played by a hilarious Manav Vij, eats sixteen eggs a day “for protein,” fears his wife and, despite his beefy body, fibs about terrorist encounters to appear tough. A young girl (a very natural Radhika Apte) is intrigued by the blind hero but direct enough to shun the “invisible tension” of romantic gamesmanship because it gives her pimples. In a volatile role flashes the wondrous Ashwini Kalsekar, so electric in Raghavan’s Johnny Gaddar, and Zakir Hussain is great as a doctor who has disconnected his cable TV connection before his son’s exams. There is a fictitious actor from the 70s played, in a masterstroke, by 70s actor Anil Dhawan, glimpsed in vintage songs wearing a checkerboard blazer with a florid scarf. Now, he checks YouTube comments and marvels at having admirers as far away as Denmark.

“Denmark? Isn’t that where Hamlet is set?” asks the magnificent Tabu, who plays his wife. This self-aware character takes the black widow motif running through her most acclaimed roles — she is even called ‘Lady Macbeth’ at one point — and allows her to toy with expectations to create a most devastating noir character. She likes to keep her crabs in the freezer, lulling them to icy sleep, before boiling them so as not to shock them. It is an extraordinary character, and Tabu plays her with an air of inevitability, as if perpetually forced to slow down for the benefit of those around her. What a delicious, despicable performance. Has there ever been a femme as fatal as Tabu?

Ayushmann Khurrana is a restrained performer known best for unshowy, relatable roles. Andhadhun makes him break out of his affable routine as he makes his way across Raghavan’s meticulously tangled web. He is a natural at the piano, and his body language in this film is pitch-perfect — especially when it shouldn’t be pitch-perfect. An earnest young man who swears on his piano keys while invoking Goddess Saraswati, Akash is no typically hardboiled noir hero. Khurrana plays him scrambled.

Andhadhun is a raucously good time at the movies — I can’t wait to watch it again tonight — but the highest notes Raghavan hits are the human ones. Cinematographer KU Mohanan’s frames frequently lie by omission, misleading us before showing us the whole picture; we could all do with better peripheral vision. Sometimes the music of Amit Trivedi cuts in, at other times it is Beethoven. Everybody deceives, and the film sets up what-if questions between the wall-to-wall gasps. Pooja Ladha Surti, Raghavan’s editor (and one of his co-writers), keeps the pacing taut enough for the mind to wander only after the end credits. Like the policeman’s diet, this is an all-protein film.

In keeping with so many of his characters, Raghavan learns from the movies. The production title for Andhadhun was Shoot The Piano Player, like Francois Truffaut’s buoyant and impulsive 1960 film, and the film’s inciting incident was officially adapted from a short film, The Piano Tuner. While Raghavan pays tribute to many — the film is dedicated to music shows Chhayageet and Chitrahaar, and salutes sources as varied as Louis Malle and La La Land — he creates something entirely his own. A film that would please both Truffaut and Vijay Anand sounds an impossible ask, but here we have it. You did it, Sriram, like nobody else had. You shot the piano player.

The Sriram Raghavan film is racy, pacy and appropriately pulpy.

Bollywood doesn’t do thrillers well. About the only exception to this rule is one man: Sriram Raghavan. His latest, Andhadhun, based on a French short story, is a glorious keep-‘em-guessing thriller, which never loses sight of that most important question: so what happens next?

Part of the joy of a good thriller is being let loose amongst a bunch of people who say one thing, do another, and mean something else entire. Almost everyone in this enterprise fits this bill perfectly: the blind pianist Aakash (Khurrana) in search of a perfect ‘dhun’, the yesteryear-star Pramod Sinha (Dhawan) married to the foxy, bored Simi (Tabu), a burly cop who specializes in being in the wrong place at the wrong time (Vij), a doctor (Hussain) who promises to do good but has other designs. There’s even a little kid who’s quite a crook. No one is innocent. This is the familiar Raghavan palette: no blacks or whites, only varied shades of grey. About the only what-you-see-is-what-you-get character is the pretty young thing (Apte) who is as intrigued by the vision-less musician as we are, but her straight-laced character to work hard for us to keep paying attention to her.

A murder is committed. Raghavan doesn’t hide the killer from the us; nor the motive. What he does, most ingeniously, is to insert an unexpected character into the situation, and have things unravel from there on. The body count goes up, and the game is on.

The film flags, just for a little while, post interval and things become a tad heavy-handed and dull. When characters start explaining too much, you start losing interest: this is a problem that pops up quite often in Raghavan’s films. But soon enough, I’m happy to report, Andhadhun is zippily back on track. Who is next on the chopping block? Who will survive?

The performances are uniformly solid. Dhawan’s presence lends heft to the proceedings: just the fact of a yesteryear star playing a yesteryear star makes you smile, especially when ‘Yeh Jeevan Hai’, that lovely Kishore ditty from the Jaya Bhaduri-Anil Dhawan starrer Piya Ka Ghar, starts up. Tabu is marvelous, Raghavan finally having created a fitting role for this uber-talented actress, whom we really should be seeing much more of. Khurrana is wonderful, too, sinking into his part. It tells us exactly why Raghavan’s previous outing Badlapur was not quite the movie it was meant to be: what if Khurrana (or another actor able to disappear into the part) had been cast in place of Varun Dhawan?

Raghavan’s love of Hindi movies of the 70s, and of pulp is evident here again, just as it was in Johnny Gaddar. The songs have a reason to be there, as does a protagonist who sings while playing the piano—a scene straight out of scores of films down the decades.

Andhadhun is racy, pacy and appropriately pulpy: alert viewers may twig on to the big reveal, but the thrills and chills are right where they should be in this blind man’s buff. It also dexterously drops some primal issues in our lap: can those without sight, ‘see’? What is right, what, if anything, is wrong? How important is fate? Does everyone deserve a life? Or is it all about just desserts?

It’s been a while since I’ve had so much twisty fun at the movies. Pro-tip: do not step out, do not look away, and stay right till the end.