Directed by John Huston from a script by Arthur Miller, a down-on-her-luck divorcée (Marilyn Monroe) falls for a Nevada cowboy (Clark Gable) who survives by rounding up and catching mustangs. 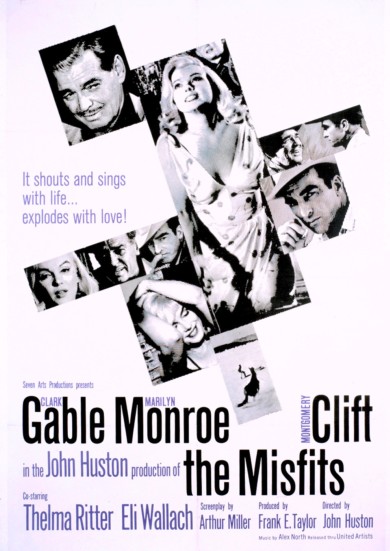 At face value, The Misfits, is a robust, high-voltage adventure drama, vibrating with explosively emotional histrionics, conceived and executed with a refreshing disdain for superficial technical and photographic slickness in favor of an uncommonly honest and direct cinematic approach. Within this framework, however, lurks a complex mass of introspective conflicts, symbolic parallels and motivational contradictions, the nuances of which may seriously confound general audiences.

Clark Gable essays the role of a self-sufficient Nevada cowboy, a kind of last of the great rugged individualists, a noble misfit. Into his life ambles a woman (Marilyn Monroe) possessed of an almost uncanny degree of humanitarian compassion. Their relationship matures smoothly enough until Gable goes ‘mustanging’, a ritual in which wild, ‘misfit’ mustangs are rudely roped into captivity. Revolted by what she regards as cruel and mercenary, Monroe, with the aid of yet another misfit, itinerant, disillusioned rodeo performer Montgomery Clift, strives to free the captive horses.

The film is somewhat uneven in pace and not entirely sound in dramatic structure. Character development is choppy in several instances. The one essayed by Thelma Ritter is essentially superfluous and, in fact, abruptly abandoned in the course of the story. Eli Wallach’s character undergoes a severely sudden and faintly inconsistent transition. Even Monroe’s never comes fully into focus.

The Misfits review: 'a beautiful accident'

This swansong for Marilyn Monroe, Montgomery Clift and Clark Gable is as emotionally potent as ever.

What a multiple swansong and beautiful accident The Misfits is. Two days after shooting finished on this wayward production in the Nevada desert, Clark Gable suffered a severe heart attack, and died 10 days later, in November 1960. It’s always been rumoured that the tough shoot contributed to his collapse: he insisted on doing many of his own stunts, including being dragged 400ft across a dry lake bed for the extraordinary climax. But it was also Marilyn Monroe’s last completed film, before a near-two-year decline of her own took hold, and it was one of the last handful Montgomery Clift would make, too.

The occasion for this restored re-issue is the BFI's full Monroe retrospective: this is the pained capstone to her mere ten years of stardom, and surely her deepest, most torn-from-the-soul performance. All three stars slipped beautifully inside the damaged skins of their parts – characters Arthur Miller, who stayed on set throughout, tailored to their personae as shooting went along.

Monroe, whose own relationship with Miller was seriously on the rocks and worsened irreparably on set, plays Roslyn, a gorgeous but jittery divorcée looking for something or someone to grab hold of. At first, we think it might be Guido (Eli Wallach), a widower and ex-bombardier in Reno who puts on the dance moves. But he’s a mite too desperate, and his friend Gay Langland (Gable), a weathered cowboy – yes, a cowboy called Gay – gains the upper hand with Roslyn instead. They’re joined by Thelma Ritter’s Isabelle, another self-destructive divorcée, and eventually Perce (Clift), an old associate of Gay’s, who has a masochistic yen to get tanked up and break himself apart at the rodeo.

Clift’s first scene is a classic example of Miller’s writing and John Huston’s beady, compassionate direction: Perce takes a phone call the others can overhear, and is soon pleading with his mother to forgive him for a long absence, disparaging his stepfather, and playing out a snivelly but touching prodigal-son routine which defines him instantly as a broken soul. They all are. The film’s an essay on abandonment and failed promises, with this makeshift family continually forming and reforming, like sibling foetuses clinging to each other helplessly in the womb.

Huston and his great cinematographer Russell Metty (Touch of Evil, Spartacus) underline the dependency of these lost children with reliably telling compositions, like the snoozing Monroe and Clift draped across each other in the back seat of their truck. And there are moments of bizarre, unnerving comedy, such as when Clift, strung out from a bronco-inflicted head injury, staggers around with his bandages unravelling, like a cut-price Frankenstein’s monster.

Of all the actors, his role feels most precisely like a commentary on a career: in the mustang-wrangling sequence at the end, we practically get flashbacks to his Red River cowboy days, but Miller also folds in the facial paralysis caused by his near-fatal car crash and subsequent addictions.

Monroe and Clift are both truly remarkable, especially together. When Gay calls Roslyn “the saddest girl I ever met”, the line springs out as the most direct and insightful ever spoken to Monroe on screen, and she reacts to it as if the truth had been grasped at last. The film gets her totally, and despite all the delays and the hospitalisations and the marital spats which made production such a nightmare, she gets it back. After one lengthy hiatus in rehab, Metty had to use soft focus to disguise her poor health, which makes her face swim fuzzily in the centre of the screen at times, and this is somehow perfect for a character so unsure of herself.

“Maybe all there is, is just the next thing”, she says to Perce behind a saloon – a line Joyce Carol Oates quotes pointedly in her 2000 Monroe novel, Blonde. If ever a film clinched the case for saving the best thing till last, it’s the final act of this one – a cash-grabbing mission to corral wild horses for so-called “chicken feed”, in which the horses barely wind up outnumbering their would-be captors. “The fewer you kill, the worse it looks,” Gable muses with a dawning sadness, quite correctly.

The stunt-work in this finale, the rapturous quality of the desert light, the logistics of the chase, the overt parable of lost certainties Miller is pushing, and the peak pitch of every performance qualify this as one of the most emotionally potent action scenes ever assembled. All the misfits in this legendary cast may have spent vast chunks of their remaining stamina getting it in the can, but boy, were their efforts worth it.

What you thought about The Misfits

71 members and guests attended this screening. The film generated some very mixed responses and it currently is the LEAST POPULAR FILM film of the season with a score of 3.45.

However, we did receive 38 observations which represents a 54% response rate. Thank for your interest and support.

All of the responses, both online and on paper are collected below.

"A film that was a bit of a mixture, good in parts, but some rather limp and unconvincing dialogue and acting, esp Gable and Monroe. Some very good photography, but others parts that I couldn’t decide if in error or deliberate. For example, an early scene with G and M talking in the cabin, when on G was sharp focus but when switched to M had her in soft focus. With the animal scenes and the gaze on M’s body I doubt this would be made today".

"Two films for the price of one. On the one hand a typical Miller fable; the humbling of the Last American Hero, shackle and broken by the modern world. Dazzling cinematography, a fetid atmosphere ratcheting towards a brutal, beautiful, shocking and quintessentially Hustoneque finale. On the other; a tender eulogy to the vanishing Golden Age of Hollywood; a luminous but porcelain brittle and fragile Monroe, a hunched and raddled Gable ably supported by the similarly doomed Clift and superb Wallach and Ritter. There are some great lines but if there's a problem it's Miller's script. Was ever a cowboy this loquacious? Duke Wayne wouldn't have said all this. The script could be halved and make a better film. I'm surprised Sam Shepherd didn't do it; the roles are a gift to ambitious actors. In the end it's a fascinating film but curiously hard to love".

"It was very difficult at times to hear Marilyn. The black and white definition was on the other hand very good. By comparison with current day standards of acting it was disappointing. Although I did enjoy Eli Wallach, his face has a look of evil about him".

"Always a joy to watch Marilyn but Clark Gable was too old for the character he was playing. Pity about sound quality".

"Slow, boring and toe-curling until close to the end when the the rodeo and horse wrangling were gripping and harrowing".

"Clarity of speech distorted by loud volume to quite a significant extent (heard others say this too)".

"Film gave much food for thought, clearly of its time. Left me feeling uncomfortable with the way the story played out and the overt sexualisation all the way through".

"I don't often dislike films but this one I did. None of the characters were likeable, the sound was poor, the acting pretty average and the scenes with the horses at the end were distressing. All rather surprising given the calibre of the cast, writer and director. At least it provoked a reaction! Thanks."

"It's hard to imagine this film being made now. But even for then, I find the Marilyn Monroe character a bit unconvincing - indeed, were they all rather more caricatures that we're used to? The wrangling was a bit hard to watch. And I couldn't follow a significant part of the dialogue - a mix of accent and lack of clarity; whatever happened to subtitles on American films?"

"Viewed from a modern prospective this film was uncomfortable to watch. Predatory men, well cast as misfits, leering, bottom slapping, Bad behaviour. Traumatic scenes with the horses. So was it well acted? The sound was awful, and the filming archaic but was it good of its time. Not a film I would watch again".

“Could we have subtitles back please”.

“A difficult 60’s film – and a very different and real acting role for Munroe. Pity that Miller’s script was largely lost through the poor sound quality”.

“I liked this film, but it is of its time. I wondered why Marilyn Munroe hated this film. Because she wasn’t well or the story line?”

“Pain, despair, false hopes, illusory guilt – and a luminous performance from Munroe - what a range!”

“A much more interesting film than I had remembered; she challenged them to look at their lives in new ways. They were all very needy – but she rose above them all. The amazing photography delivers”.

“Very difficult to give a score – well made for its time – photography excellent – but poor film script”.

“Felt sad for the horses”. “Poor sound – some poor acting – A film of its time”.