The Painter and the Thief [Kunstneren og tyven]

Czech painter Barbora, living in Oslo, invites the Norwegian thief who stole her paintings to sit for a portrait, capturing the unlikely relationship that ensues as they form an emotional bond through their mutual affinity for art. 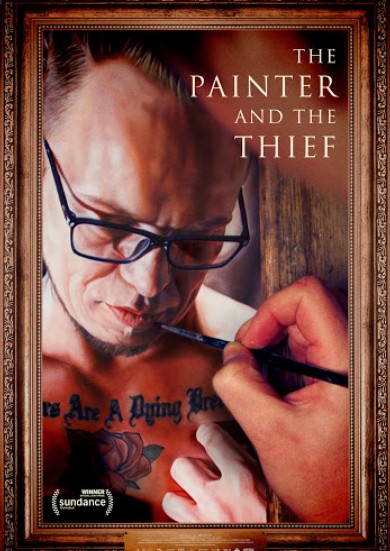 ‘The Painter and the Thief’: Film Review

A Czech painter befriends the junkie thief who stole two of her artworks, paving the way for a surprising friendship, in Benjamin Ree's unpredictable art-heist doc.

Incredible. That’s the word that comes to mind with Benjamin Ree’s “The Painter and the Thief,” a stranger-than-fiction friendship story in which vérité techniques produce unbelievable results. I don’t mean to imply that this astonishing documentary isn’t truthful. Rather, I’m in awe of how things played out, and fully aware that there was a certain amount of manipulation — not necessarily of the facts, but certainly in the way they’re presented — required to produce the cinematic equivalent of a cubist portrait, in which an artist and her unlikely muse are made to overlap, revealing unexpected dimensions of one another over time.

By the director’s own account, at the beginning of what would prove to be a three-year journey, Ree knew only that he wanted to make a film about an art heist (he started the project after the premiere of his 2016 chess-champ doc “Magnus”). Ree’s research led him to Czech artist Barbora Kysilkova, who had recently moved to Oslo, where two massive works were taken from the window of her first solo show in Norway.

The film begins with time-lapse footage of Kysilkova painting “The Swan Song,” a haunting nature morte in which a white bird lies dead in tall dark grass. Then it shows surveillance footage from within the gallery, as two men with pixelated faces break in and make off with a pair of canvases. What happened next was the thing that captured Ree’s attention: In court, Kysilkova approached the thief who had been put on trial, a junkie named Karl-Bertil Nordland, and asked if he would agree to pose for a portrait (his accomplice is strategically left out of the picture).

The film isn’t clear about the verdict, focusing instead on the connection between the two title characters. Was this some form of forgiveness on her part or a strategy to recover the missing paintings? And did she really expect a man with the words “Snitchers Are A Dying Breed” tattooed across his chest to come clean about what he’d done with the stolen artwork?

Ree and editor Robert Stengård don’t give us all the information we might need to form a clear understanding of their subjects’ actions, yet their approach is not only more artistic but somehow more representative of real life: People’s motives — and surely those of addicts and artists above all — can be paradoxical and counterintuitive, and though the situation begs some amount of psychological analysis, one senses that both parties are acting on instinct to a large degree.

“The moment I have met him at the court room, I really sort of fell in love with him,” Kysilkova tells her husband, Øystein Stene (another fascinating character, who likens supporting her connection to Nordland to letting a child play in traffic). The notion that her spouse should have a say in how she seeks artistic inspiration may sound narrow-mindedly patriarchal, but Kysilkova clearly has a history of encouraging unhealthy relationships — including an abusive ex-boyfriend — and though she permits Ree’s cameras to film a relationship counseling session with her husband, questions remain about their dynamic.

What appears to be a noble act on her part — refusing to see this ex-con as a thief, insisting on capturing a different aspect in her portraits of him — may actually be a continuation of a self-destructive pattern. There’s a tortured and obsessive quality to her work that aligns with his personality as well, and a vulnerability that both show the camera that makes it possible for Ree to explore the commonalities between them. “I really feel like I’m a painting junkie,” Kysilkova admits, and given what we see of her method, one wonders whether she might benefit from some kind of intervention. (What influence, if any, did the filmmakers have in her decisions?)

Kysilkova may have spared Nordland a prison sentence, but he’s still capable of potentially dangerous behavior. Less than 30 minutes into the film, something extreme happens that lands him in the hospital with a broken hip, and instead of pulling away, Kysilkova becomes directly involved in his physical therapy. At this point, the film backtracks to the beginning and replays things from Nordland’s point of view, a tricksy structural choice that amplifies the film’s capacity to surprise. As Nordland puts it, “She sees me very well, but she forgets I can see her too,” before sharing insights that had been withheld from us until now.

When Ree first started filming, he couldn’t have known where this story would lead, and in order to re-create that sense of unpredictability, he uses a time-bending nonlinear structure and various sleight-of-hand techniques to deliver information when it’s most effective. Cameras were present for several unforgettable moments, as when Kysilkova unveils her first large painting of Nordland for him to see, capturing his genuinely shaken reaction as he absorbs what it means to be immortalized by a woman he had wronged. And they tag along as Kysilkova makes what is almost certainly documentary history: An artist plans a heist to steal back her missing work.

To get the desired emotional reaction, “The Painter and the Thief” proves able to deceive in ways that are best discovered for yourself. It works: In a genius final stroke, Ree pulls back to reveal the entire canvas, putting key aspects of this unconventional portrait into startling new perspective.

A muse is a mysterious thing, as is the mindset of the painter who finds one. Neither would seem to be great subjects for a film, but how wrong one can be. The Painter and the Thief is a superb Norwegian documentary about a painter who befriended the criminal who stole two of her paintings. He then became her muse.

About five years ago, Barbora Kysilkova, a Czech artist, had recently arrived in Oslo from Berlin. Though not well-known, her photo-realist paintings attracted some attention at her first show, in the Gallery Nobel, in Oslo. The gallery put them in its feature windows - a large picture of two entwined swans, entitled Swan Song, and another of two women, called Chloe & Emma. Soon afterwards, two men broke in and stole both paintings, taking the time to remove about 100 nails from the frames, rather than cutting the canvases out. They were meticulous but dumb: closed circuit cameras filmed the whole thing. The police nabbed them within a few days, but did not recover the pictures.

Kysilkova attended the trial of one of the defendants. Karl-Bertil Nordland was a heroin addict with severe emotional problems, who had spent years in prison on previous offences. Kysilkova asked him why he stole her paintings. “Because they were beautiful,” he replied. She then asked him if he would allow her to paint his portrait - not exactly the reaction I was expecting.

From this point, we are in murky waters. Kysilkova can’t be sure she is safe with him, but feels compelled to paint him, with his tattooed arms and wounded body. It’s almost like she is taking him captive, but in the sweetest way. When she shows him her first portrait, his reaction is extreme. He cries like a baby, as if releasing years of rage. As the movie progresses, the pathology gets deeper, until we are a long way from Kansas, Dorothy.

Benjamin Ree spent three years filming this pair, through some thick and thin moments. Kysilkova’s motives are less penetrable than Nordland’s, but they are both complex characters. At one point, his life begins to improve as hers takes a nose-dive: the polarities are reversed. Her drive to recover her paintings, a kind of compulsion, is very moving.

The level of trust required to allow a filmmaker to document their lives is in itself moving, but it mirrors the relationship they have with each other. Karl-Bertil is a haunted man, as vulnerable as a child. Barbora only looks as if she has it all together. The slow revelation of her pain makes clear just how artful Ree’s work on structure has been in this achingly beautiful true story.

Thanks to Paul James and Focal Point VR for facilitating the late change to streaming for this week's film. 84 individual accounts joined online to watch along (with the number of people who watch with other members means this was a very well 'attended' film). Some thoughts below from submissions via the website...

"Stunning documentary - riveting from the first scene to the last. Observational filmmaking at its best. It was so much more than a documentary as I was aware throughout that the camera was there and it was clearly edited to have a storyline. Despite my slight unease with this, it felt authentic and I was drawn into the intertwined lives and surprising friendship between Barbora, the painter and Karl-Bertil, the thief. They were both artists - she recognisably so, but also Karl-Bertil with his body tatooed with his demons and his sensitivity to the visual. Barbora's open curiosity about the thief kicks off the film and the relationship which she develops with Karl-Bertil (who is surprisingly open to her questions) kept me engaged throughout her quest to find her stolen paintings. The final scene was breathtaking. It became clear to me that not only their lives, but their pathologies had became intertwined. And I am left with thoughts and questions about how (and why) we meet and are drawn to people who have a great impact on us, how they leave us (or we leave them) and how our pasts keep following after us."

"A fascinating and moving film that says a lot about art, rehabilitation, reconciliation and relationships. Send a copy to Dominic Raab!"

"A little slow but quite absorbing.

Norwegian prisons appear to be rather luxurious."

"A very clever exploration of how people interact and reveal themselves in unexpected ways; as a film project, entirely fascinating"

"A really engaging and fascinating documentary which was sensitively portrayed and had me gripped throughout."