A young Chinese-American woman joins her extended family in China for a “wedding” in order to say goodbye to her terminally ill grandmother. This ensemble piece explores the clash of cultures with humour and warmth. 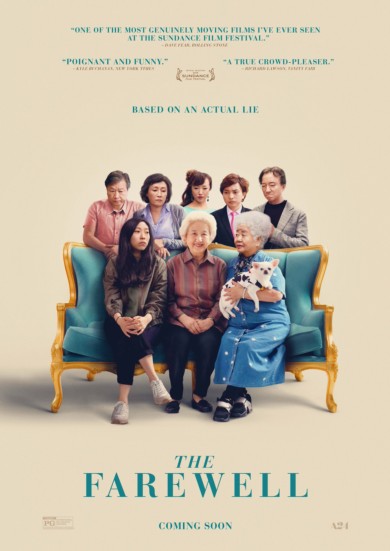 The Farewell Is a Big Arrival for Director Lulu Wang.

“Chinese people have a saying: When people get cancer, they die.” These are the words of wisdom imparted to Brooklyn twentysomething Billi (Awkwafina) by her mother while delivering the news of her beloved grandma Nai Nai’s lung cancer diagnosis. They’re clearly little comfort, but also prove to be anything but reliable in the turn of events that follows.

The Farewell, based on writer-director Lulu Wang’s own stranger-than-fiction true family story, was previously featured on the 2016 This American Life episode “In Defense of Ignorance.” But no podcast could have prepared anyone for the sophistication of Wang’s talents as a filmmaker, and in this, her second feature, she transcends the hooky premise with confidence and subtlety. The little dramas and themes that emerge during the reunion of the film’s far-flung brood become, like a family, more than the sum of its individual parts, and an incredibly satisfying meal of a film.

The film opens with a phone conversation that spans half the globe and all the living generations of a family. Billi walks the bustling streets of Manhattan chatting with Nai Nai (the charmingly zingy Shuzhen Zhou), who waits at the doctor’s office for an MRI. She’s accompanied by her sister Little Nai Nai (Lu Hong) who gets the news of the diagnosis first. Since Chinese law doesn’t require doctors to disclose diagnoses to patients, Little Nai Nai doesn’t tell her sister, the matriarch of the family, that she has inoperable stage four lung cancer. (It’s a move we are told isn’t all that uncommon in Chinese families.) Instead, she tells the rest of the family, and soon a wedding has been orchestrated between Billi’s cousin Hao Hao (Han Chen) and his Japanese girlfriend Aiko (Aoi Mizuhara) as a means of getting the entire family back to Changchun.

Billi’s parents (played by the excellent Diana Lin and Tzi Ma) assure her she doesn’t need to make the trip — that she’s too American and emotionally transparent, and won’t be able to keep up the familywide ruse. But we’ve already seen Billi on the phone with her grandmother, and we know they have a bond, if a somewhat abstract, long-distance one. With her professional prospects in New York faltering, she makes the trip back to the town she spent her early childhood in.

Going back to a homeland that doesn’t quite feel like home is the foundational melancholy of The Farewell. The neighborhood Billi grew up in is demolished and unrecognizable, replaced by rows of identical apartment towers; she and the rest of her family stay in a slightly dodgy hotel. Billi isn’t the only other “foreigner” in the family; her uncle and cousin moved to Japan so long ago that Hao Hao barely speaks Chinese anymore. His bride-to-be Aiko speaks none, and doesn’t seem to know exactly why she’s marrying her boyfriend of three months, something the Wang gets a lot of wry comic mileage out of.

The fact that The Farewell is such a frequently and easily funny film, on top of the heavy stuff it’s dealing with, is what makes it feel so miraculous. Awkwafina’s comic timing comes in handy, Wang using it in just the right moments to emphasize her unmistakable American-ness. But The Farewell is also just about how being a part of a family is inherently funny, and not in a Meet The Fockers way — that humans are weird without trying to be and you’re most likely to get a glimpse of that when you’re related to them. Billi’s family aren’t exactly bickerers, but they’re all trying to figure each other out, having spent so much time apart. Wang counterpoints conversations over action with graceful intuition; there’s always something going on in the background that adds a new shade to whatever is being said. Cinematographer Anna Solano’s soft palette guides us through the layers of human interaction, whether in a tiny cramped living room or a sprawling banquet hall.

The narrative and visual thread that runs through The Farewell is collectivism, a particularly eastern concept that immigrant kids tend to have to relearn at some point in their lives. “You think one’s life belongs to one’s self,” Billi’s uncle says when she hits a breaking point with the big lie. Over and over again, everyone in the film realizes the satisfaction that comes from being part of a shared consciousness, and the pain of being cut out of it. As the film reaches its third-act centerpiece, the much-anticipated wedding itself, it’s clear that one “big” lie allowed some larger truths the space to show themselves. Wang’s ability to bring it all together feels both like the work of a seasoned auteur some 40 films into her career, and a very exciting arrival.

The Crazy Rich Asians actor has won over Sundance with a heartfelt film based on an episode of This American Life.

Last summer brought with it two films sharing two similarities: both starred Awkwafina and both wasted Awkwafina. The fast-talking comic dynamo cropped up in Ocean’s 8 and Crazy Rich Asians yet was sorely underused in both, showing us just enough to make us want much, much more, outperforming more seasoned co-stars with ease. Given her rising star (last year, she was also the first Asian woman to host Saturday Night Live since 2000) one would expect the next project to be a flashy star vehicle, an Apatow comedy, perhaps, something broad and multiplex-friendly.

But neatly sidestepping convention, Awkwafina has found surprise Sundance success with The Farewell, an unexpected dramatic leap, the kind of which comic actors usually make much later in their career.

It’s a statement of intent, informing the industry right from the outset that she doesn’t want to be pigeonholed and an ambitious one at that, heading up a film mostly in Mandarin. She plays Billi, a woman living in New York who moved to the US with her parents as a child, leaving her extended family in China. She’s maintained a close relationship with her grandmother Nai Nai (Shuzhen Zhou), speaking on the phone regularly, and is horrified to hear from her parents that she’s been diagnosed with terminal lung cancer. She’s even more horrified when she hears that her family aren’t planning to tell Nai Nai that she’s dying. Instead, a wedding has been planned as a cover for them to say their goodbyes, and Billi must travel to China to take part in the ruse.

The stage is set for all-out farce and while writer-director Lulu Wang does pepper her second feature with some light comedy, she avoids broader territory, instead choosing to construct a believably thorny family dynamic. The film is based on a true story, one that has previously been the subject of a This American Life episode, and there’s authenticity underpinning the outlandish setup as well as cultural specificity. Billi’s family explains that it’s not an uncommon practice to mislead a dying family member in China and throughout her visit, she is forced to reckon with her feelings of detachment, a stranger in a country where she was born. Again, there’s an avoidance of obvious culture clash comedy, and instead Wang deftly details both the guilt of living so far from family and how one’s concept of what home really means can get so tangled.

There’s also resonance in Wang’s examination of how different family members deal with extreme sadness. So often on screen there’s a narrow uniformity when grief, or in this case a sort of pre-grief, is handled that it’s refreshing to see a film that recognises the spectrum. There’s a melancholy hovering in the background and Awkwafina does fine work expressing this through her eyes, so close to tears yet unable to release for fear of revealing the secret. She gives an accomplished dramatic performance and is surrounded by a skilled ensemble, naturalistic but distinctive. As her dying grandmother, Zhou is wonderful. She’s loving but also spiky and insulting, a perceptive portrayal of an older family member whose filter has been lost along the way, such rich characterisation acting as a clear, unsoftened love letter to Wang’s real-life grandmother.

It’s a slight film at times but one that builds to a crescendo of emotion that left many in my particular screening rather bleary-eyed (I’d argue that the footnote, while eye-opening, sullies its power somewhat). Not long after its premiere, it was snapped up by A24 and it’s clear that the film will be heading toward a wide audience, along with its star, for whom The Farewell acts as one hell of an introduction.

What you thought about The Farewell

You will have noticed some technical difficulties when playing the film. Unfortunately a previous user had moved the projector and turned off some key equipment. The sterling work of Paul James ensured we were able to continue with the screening.

Your comments are collated below.

"There's considerable bitter sweet poignancy to pondering what one might say to a loved one who is soon to die but doesn't know it. This is a vibrant counterpoint to the endless stream of gloomy, one note cancer dramas that come out of Hollywood; a rich and warm tapestry of family life full of good humour and affection".

"A lovely insight into Chinese family life and culture . Particularly liked the scene around the father's grave, very funny".

"Given the critical acclaim and awards, I was rather underwhelmed by this film. Enjoyable enough, nothing wrong with it, but nothing standout either - I was expecting more".

"Some excellent acting and an interesting insight into Chinese culture but I had trouble keeping up with the subtitles during conversational exchanges and the film did not keep my attention throughout".

"Highly enjoyable film that treated a grim subject with humour and compassion - but did Nai Nai really know all along?"

"Fascinating to see the differences and similarities between East and West. The wedding scene was very reminiscent of many weddings I have attended".