Victor, a disillusioned sexagenarian, is offered a chance to travel back in time to relive the most memorable week of his life when, 40 years earlier, he met his great love. Daniel Auteuil, Fanny Ardant, Guillaume Canet star. 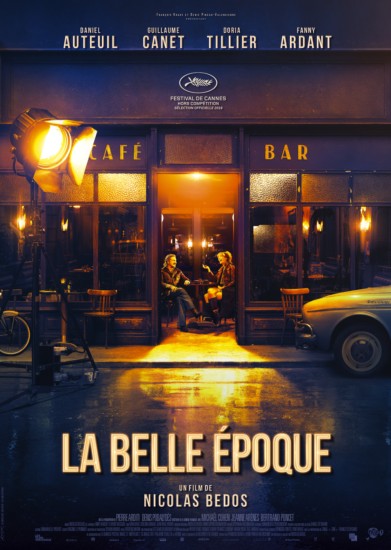 La Belle Epoque is the sort of vastly entertaining mainstream French film that was produced with regularity during the 1970s-’80s and was sometimes remade by Hollywood. Those days are long gone but it could happen with this witty, sexy and original romantic comedy that touches many points of satisfaction. This is the rare contemporary French attraction that looks to have real prospects for a vibrant international career. Not a high-art film, the sharp-minded film played out of competition in the main selection at Cannes.

Heavy with wisecracks and sardonic smarts, the film starts bam-bam-bam with sharp remarks emanating from the mouths of mostly older folks socializing at what looks like an early 19th century French salon. Those in attendance are, in fact, modern citizens who have paid a pretty penny for a virtual trip into the past courtesy of Time Travelers, a sophisticated outfit that does a convincing job of re-creating olden times in a very thorough manner, from food and clothes to the mean-spirited quality of wit. No one says “um” or “like” or “you know.”

The director/ringleader is the short-tempered Antoine (Guillaume Canet), while the guests of special interest this night in a palatial setting are 70ish Victor (Daniel Auteuil) and his beautiful wife, Marianne (Fanny Ardant), whose caustic waterfall wit is employed almost exclusively in the service of humiliating her hirsute mate; “I think you’ve been alive too long,” she lets fly at a vulnerable moment. All evening, the barbs are fired off as quickly as at an old Friars Club roast but with more sincerely intended effect.

Marianne’s scorn is no joke — her unkempt husband, a former newspaper cartoonist, has pretty much rejected the idea of keeping up with the modern world — and she happily flaunts her own cheating. Ardant’s marvelously overheated performance sets the tone, with Auteuil’s Victor as the sad-sack target, but the latter comes into his own when, at considerable expense, he decides to plunge more thoroughly into the escapist opportunity offered by new technology to revisit the world of the past.

For Victor, this is the early 1970s, when he was in his 20s. The setting is an entirely realistic and traditional French neighborhood the anchor of which is a classic old bistro, where the first difference you notice is that everyone there smokes like a furnace. The cars are tin cans and racial epithets sometimes fly, but the music is great.

What Victor is trying to recapture is not just his fondest moment in time but the youthful Marianne he first fell in love with, who’s represented in the time-travel interludes by Margot, a waitress at the bistro (embodied by Doria Tillier), whom one quickly accepts as the youthful Marianne, the love object she’s playing. Like seemingly everyone else, the substitute has been been very well rehearsed and is fed lines that make it easy for Victor to fall in love with her all over again.

True to French farce traditions, a host of obstacles present themselves, and many are laugh-out-loud funny. Victor, who’s cleaned up his act physically, is having such a good time revisiting the world of his youth that he would much prefer to stay there. This, in turn, requires a lot more money, plus a willingness and ability on the part of the director and actress to perpetuate the charade, during which, bien sur, Victor becomes more and more obsessed with the young version of his wife.

Impressively, Bedos successfully jumps through the many creative hoops he sets and in the process pulls off the most thoroughly entertaining big-screen French farce in a very long time, one that’s both classical and modern; he uses all the old tropes but convincingly adorns them with up-to-the-minute attitudinal and technological trappings.

The director also gets immaculate work from his players, beginning with the superb old pros Auteuil and Ardant, who display the energy of players half their age and effortlessly layer the film with a veneer of Gallic knowingness and sophistication.

When Victor is finally ejected from his youthful revelry and forced to confront his actual status as an old guy, the pang feels real. And the film stays in the 1970s re-creation long enough to let you seriously ponder whether life really might have been better in the era before cellphones, laptops and texting and innumerable other modern conveniences. But the final payoff is strong, too, leaving a satisfied feel at the end.

This is accomplished commercial filmmaking of a type rarely seen these days, much less applied to this kind of old-fashioned but sharp-minded material.

Poor Victor Drummond (Daniel Auteuil). He lost his job as a comic-book illustrator because of the horrible modern world in which everyone worships the internet all the time. These days he has to suffer through life as a kept man while his wife and son make pots of money and try to convince him to accept well-paid work on their streaming service.

Forgive me my skepticism, but for some reason I’m just finding it harder to buy into the dilemma of the poor little well-off white guy as found in Nicolas Bedos’ La Belle Époque these days. Maybe it’s simply a moral failing of mine. Hmm.

Anyhow, Victor’s son Maxime (Michaël Cohen) is luckily not entirely devoid of use when he gifts Victor a voucher for an innovative re-enactment entertainment package, in which he gets to pick the time period. Think of the packages as escape rooms, except instead of escaping a room of puzzles there’s, um, history. Victor picks the date in 1974 when he first met his recently estranged wife Marianne (Fanny Ardant) and soon finds himself on a carefully recreated life-size set of the street and bar in which they first locked eyes. Cue much romantic comedy as Antoine, the producer and director of Victor’s time-travelling experience, repeatedly bullies his employee Margot, the actor playing the younger Marriane (Doria Tiller). Don’t worry though, he’s troubled and loves her so it’s apparently fine.

Comparisons have been made between La Belle Époque and the work of Charlie Kaufmann. However, what came to the fore for this reviewer was more similar to Peter Weir’s The Truman Show. While Victor may have signed up for this immersive recreation of reality, the lengths to which Antoine and his crew go in order to control and observe Victor certainly cross the line into unacceptable. However, disappointingly, and in contrast to The Truman Show, despite being ostensibly critical of the problems of technology, La Belle Époque has curiously little to say about the dangers of surveillance in the modern era.

To give the film some light praise, La Belle Époque sets out to be provocative as demonstrated in the film’s frenetic opening regency-era sequence, replete with raunchiness and sudden shocks. It does succeed. The fast-paced, at times exhausting editing slows down as the film travels back to Victor’s more simple, idealised era. This was preferable but only just, considering that providing certain characters with more nuance did not necessarily improve events.

Who knows? Maybe I would have been more entertained by Victor’s exploits if it didn’t take the world literally being turned into a playground for his own desires and a huge cast of characters provided to accede to his every whim in order for him to learn some surprisingly banal and rudimentary lessons about life. But that’s the plight of the poor little well-off white guy these days and I will prepare my tiny violin accordingly.

What you thought about La Belle Époque

76 members and guests attended the screening of La Belle Époque. We received a Total of 35 Responses representing a 46% response rate which delivered a Film Score of 4.60.

All comments are below.

“What if you got lost in 'Westworld'? Indulged that familiar fantasy of travelling back to your youth and reliving your glory days ...but then got side tracked and ended up wandering into alternate realities? As with 'Mr Nobody' the spirit of Christopher Nolan is present in the dizzying perspectives on a looking glass world in a clever modernist setup but at heart the film is about hanging on to love in the face of life's turbulent tides. As such it marries its themes with visual panache and considerable humour. Dora Tillier steals the limelight with the trickiest part to play while, though Ardant and Auteuil act with the ease, grace and lightness of touch one might expect from such seasoned pros, I find Victor's impatience and exhaustion with the modern world a trifle lazy; is he worthy of the reward at the finale? and Marianne's volte face not entirely convincing. Perhaps they deserve each other. Nonetheless, overall it is charming, amusing and clever”.

“Very ingenious plot and hugely enjoyable. Another good choice. Thanks”.

“(Confession - I couldn't make it to the screening but found it on iPlayer so watched it the next day!) Ultimately a gentle, romantic film with humour and emotion - and yet that description makes it sound insipid and uninteresting which it certainly was not! A really clever take on reliving one's youth and finding romance again. I really enjoyed it.

(I'm intrigued to see other's reactions given that I also thought Mr Nobody was excellent but that garnered some surprisingly negative reactions).”

“An interesting contrast with ‘Mr Nobody’ –similar theme of what is ‘real’ or ‘unreal’. Loved some of the neat scenes, especially the ‘whirling pits’ – took me back”.

“What a fun, witty, terrific film this is. So clever, and as someone who lived the time, really well recreated. Brilliant acting. Loved the twists. Will watch it again. Can still smell the Gaullist. Great choice”.

“This was so nostalgic! I just loved it – fantastically entertaining and a trip down memory lane”. “Very enjoyable and clever. Great premise”. “Clever – enjoyable, a delight”. “Funny and clever”. “I really enjoyed it, Very French!” “Absoluement Superbe”.

“Loved the outfits”. “Funny and meaningful”. “’Complicated’ but crazy. However I am old enough for me to be able to relate to it rather well”.

“Took a while to get into it”. “Unusual, inventive and very droll”.

“Great fun”. “Delightfully funny, droll and original. Good to have a French film with humour, imaginative touching and life enhancing”.