My Life as a Courgette

After losing his mother, a young boy (nicknamed Courgette) is sent to a foster home with other orphans where he begins to learn the meaning of trust and true love. Charming stop-motion claymation allows us to watch life through the eyes of a child. 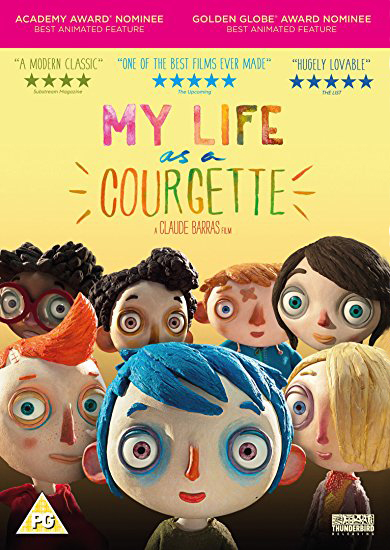 What you thought about My Life as a Courgette

127 members and guests came along to see the short film “Tribe, the Life of Han” and “My life as a Courgette”. 75 provided responses, a hit rate of 60%. Same as last time. Many thanks…keep them coming. As the stats show, 96% of those responding “Loved Courgette” and your views were summed up with “An excellent story; poignant and funny in equal measure”. Adjectives were displayed to the full extent with “Quirky, funny, moving, tragic, hopeful, sad, mournful, sweet, and wonderful animation”. Others said it was “a sheer delight”. “Hugely entertaining. A delightful film. Exceptional animation which managed to convey a huge range of emotions. It had humorous moments also”. “Powerful, subtle, different and an astringent story about innocence, experience and love. Remarkable!” “Wonderfully sensitive film. Loved it”. “Poignant perceptions through children’s eyes and successful because you would never have child actors so skilful”. “Whilst I found it difficult to connect with the student film, I immediately, in contrast, connected with Courgette. A wonderful touching film, so “real” for animation”. A member sent an email which said “I really enjoyed both screenings this evening, a big tick of excellent for the above two films. Tribe – the subject of the film was very interesting and wanted to see more of how the story evolved. To meet the two talented artists who had composed this short film was a compliment to the audience this evening. The story, the choreography, the scene setting, the talent of the actors produced a very professional short film on a minimal budget and I wish the two Directors of the film every success for the future. It would be a pleasure to watch the rest of Tribe and well done to GFS for supporting such talented people. My Life as a Courgette – a good choice for this evening. The animation showed immense talent of creativeness in how the characters developed depicting a part of French society today, and probably worldwide. The expressions, movement of the animated characters and how the story evolved with so much stimulation to hold your attention. The scene settings, the interaction of the characters and how each character exhibited their personalities through the story. It was lovely and unusual to see a European animation.” “What a delightful film. So much expression in those soulful eyes. Never thought an animated film could convey so much emotion”. “My expectations of this film were not high. What a beautiful surprise. Touching funny and utterly absorbing. Well done GFS for introducing me to a film that I would never have discovered by myself”. “Wonderful film – so unusual to see a French film with a great script – and a beginning, middle and end in the right place!” There are many more comments on the website. “Loved the eyebrows, the policeman’s nose and the squirrel. Juxtaposition of this “innocent medium” and the back stories of the children. Delightful”. “Great production – in the true genre of French tragic comedy”. “Beautifully made and charming- pity the subtitles were a bit small for those of us with rather poor sight. A touching and worthwhile story”. “Completely charming and very touching. Admirable animation and a haunting soundtrack. An honest film dealing with troubled children who learn to care for each other when no one else will”. “Sadly effecting – especially if Courgette looks just like a sad little boy you know”. To the writer who proposed certain films for next season they have been added to the website. "Thank you for organising an enjoyable evening. Given the premise that this is a film about abused and mentally damaged kids in an orphanage and that our hero accidentally murders his mother in the first five minutes this is about as upbeat and positive as it could possibly be, finishing with a redemptive sequence that would make Disney blush. Redolent of Pixar’s better efforts in its depiction of the trickier stages of an already difficult childhood it has wit, charm, considerable humour and deft characterisation. It looks lovely. 5/5. “A delightful film. Sadness, charm and humour conveyed through brilliant animation against very simple background sets and a great script. Shows a film doesn't have to be long to make an impact and provide real enjoyment. Wasn't expecting that and another good choice from the film society”. Thanks. “I was deeply impressed and moved by this film, an unsentimental story about children damaged by inadequate, sometimes borderline criminal parenting but leavened with the happiness of a magical trip to the mountains, caring orphanage staff and their own mutual support. It provoked sober reflection: on our child care system that can fail so many of its powerless participants; on the profound need of children, especially when young, for loving parenting. To be critical, in reality the children would be unlikely to bond as they did, ditto the adoption of Icare/Courgette and Camille. But in all it was an absorbing, lucent piece”. “Good to support young people trying to achieve their goals in creativity. I thought the music was particularly effective. Loved the animation – the sensitivity and ‘edge’ kept it well away from being saccharine. I rate it as excellent.” “On the surface a joyful, charming film with adorable characters and a beautifully rendered world. Under the surface a poignant story of loss, abandonment, friendship and family. I wish all children’s homes were run by such loving staff but knowing that they aren’t, I left feeling a little sad for the ones left behind”.