The Other Side of Hope

This film offers two bittersweet stories interwining, about a refugee in a strange and hostile land and an old entrepreneur who leaves his wife and finds a fresh start in running a diner. Kaurismaki explores the plight of the modern refugee with deadpan humour and emotion. 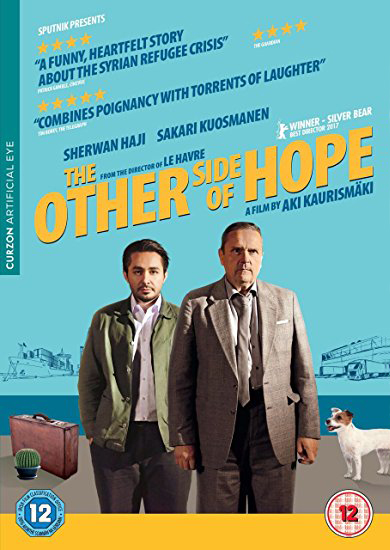 If you want cinephile escapism as far away from La La Land as possible, then Aki Kaurismäki – the great Finnish master of melancholy wit – is your man. His world remains the familiar one he’s built so lovingly over a long career, a place where jobs are a barely tolerated necessity, everybody smokes and drinks, 1950s/60s vintage clothes, cars, bars and uniforms are preferred, and things go off at half cock and are met with deadpan responses and biting remarks. It’s an enjoyable place to escape to, even though you have to be tough to inhabit it. Nighttime mood lighting out of Edward Hopper paintings predominates and, just as in old westerns, there are men and women of honour and generosity and some who have none. A speedy opening montage of a coal ship being unloaded at Helsinki indicates that The Other Side of Hope follows Le Havre as the second of a putative dockyard trilogy. I leave it to your imagination to guess in what Chaplinesque manner the resilient Syrian refugee Khaled (Sherwan Haji) is introduced to us – a striking visual gag that plays on race relations. The film’s other protagonist, Wikström (Sakari Kuosmanen), is a burly middle-aged employee in an immaculate suit who leaves his wife (Ilka Koivula) by putting his wedding ring and keys on the table and walking out the door (she throws the ring into her ashtray). He winds up his shirt retail business, wins at poker and buys a hopeless restaurant staffed by three ne’er-do-wells, each a masterpiece in slovenly character observation. Parallel threads see Khaled get punished for being honest with the police, go on the run and get attacked by fascist thugs, while Wikström tries to make changes to his new place, experimenting disastrously and hilariously with the cuisine. Khaled and Wikström don’t meet for quite a while, but after they do the film picks up yet more comic speed and momentum as Khaled gets fake credentials. His mission is to find his missing sister, lost en route from Aleppo; Wikström is just looking for a change (at one point he runs into his wife selling snacks. “I gave up drink and bought a kiosk,” she explains). The film is dedicated to the late Peter von Bagh, the Finnish polymath filmmaker, writer and programmer who died in 2014 and was Kaurismäki’s great friend, collaborator and sharer of straight-faced drollery. A Finnish colleague, Max Borg, tells me that Koistinen, the adorable restaurant dog here, bears the same name as a character in Kaurismäki’s Lights in the Dusk played by Janne Hyytiäinen, who appears the chef in this film. These are the kind of connections that emphasise the particularity of Kaurismäki’s creations. Although for fans it’s the familiarity of his tropes that makes every film so welcoming, developments of a sort are still detectable. Helsinki is a more soothing, almost nurturing place than ever before, with various musicians breaking up the story with blues and tango ballads. The gags roll out at a faster rate than usual. It all adds up to a gently loving fable with a straightforward political message that home can be wherever you find it. Aki Kaurismäki is nowadays a wry sentimentalist who seems to believe that, if hope may not spring eternal, it can gush brown out of rusty taps.

The Finnish director Aki Kaurismäki films are often marked by a particular kind of humor. As I’ve been saying since the early 1990s, he really can put the “dead” in “deadpan.” This was particularly true in such ‘90s pictures as “The Match Factory Girl” and “I Hired A Contract Killer,” tales of privation and depression that treated these subjects with both gravity and acknowledgement of an overall absurdity in the human condition. Mr. Kaurismäki’s protagonists are often drink-soaked sad sacks who achieve a kind of sodden resignation. In cases where they’re not these types, they’re the Leningrad Cowboys, an unlikely “rock” “band” that carries on inexorably despite their ineptitude and the bemused semi-indifference of nearly every audience they encounter. In recent years, though, the director has found something to believe in, and this has added a humanist dimension to his pictures that is both pleasing and moving. His 2011 “Le Havre” was about a shoe-shiner in the title French port who takes in a young African teen who came on a container ship. Aside from being an excellent illustration of the Christian proverb about loving thy neighbor, it was also a warm and funny film standing up for the larger principle of immigration. So too is his latest feature, “The Other Side of Hope.” Because it’s set in his native Finland, I suppose this picture has more of what I’ll call Akian tropes than “Le Havre” did. One of its protagonists, Wikström, drives around in a sleek, oversized black car of a vintage unknown to me, in keeping with the director’s insistence of never depicting a post-1962 auto. Wikström is a man at loose ends, having dissolved his marriage and subsequently won a small fortune at poker. He decides to invest that cash in a small bar/restaurant that’s very down at its heels, and whose staff is highly ambivalent about the quality of attention that comes with a new owner. In the meantime, Khaled, a Syrian refugee who’s come in via a coal ship (his emergence on docking is an unforgettable image) is being processed through Finland’s supposedly humane immigration system. But once he’s very politely rejected, he goes on the lam. Not selfishly—he is merely desperate to get word from his sister in Syria while he is in Europe, and to arrange her passage out of Syria from the safety of Helsinki. Once Khaled and Wikström’s paths cross for the second time (their first encounter is when Wikström almost runs him down in that aforementioned car), hope is revived, and comedy blossoms, as when Wikström tries to transform his place into a sushi restaurant. But Khaled’s quest is made difficult by belligerent racist skinheads. By the time Khaled is actually put in touch with his sister, the race against time is even more critical. The movie expands upon Kaurismäki’s central mode of observation and delivers some trenchant, upsetting truths about the immigration experience from the side of those seeking asylum. While in the detaining center awaiting a ruling on his case, Khaled is told by a friend not to appear too cheerful, as people will take him for mentally disturbed. Of course a serious mien may lead some to react with fear. As for the skinheads, they consistently get Khaled’s ethnicity wrong as they spew hate at him. Kaurismäki makes these bigots look ridiculous, but he also takes very seriously the damage they do, and the movie’s finale takes that into account. Its suggestive title lingers at the end, leaving a question mark that the viewer will have to turn over personally, and that’s a good thing.

What you thought about The Other Side of Hope