It's 5 years since GFS screened "A Separation", so time for another Farhadi film! An Iranian couple is performing in "Death of a Salesman" and they have just rented a flat where the wife is assaulted, which leaves the husband determined to find the perpetrator despite his wife's traumatized objections. Won Best Foreign Language Film Oscar in 2017. 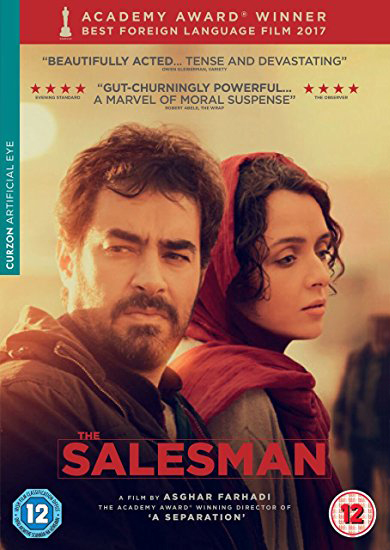 What you thought about The Salesman

We had an attendance of 127 at this screening. There were 61 responses providing a 48% hit rate. “So poignant, so heartbreaking, so well acted, so thought provoking.” “Beautiful film, in every way, full of pathos.” “Excellent in every way – suspenseful, moving, riveting. Acting superb from everyone. First class film.” “The most tense, superbly acted film of the season. GFS must show more films by Farhadi!” “Yes, Hitchcockian – but a film for today.” “Very intense and unusual drama – better in the second half. Couldn’t really understand the tie-in between the “Death of a Salesman” and the main story.” “Suspense ’till the final minutes. In the Middle East story would have been reverse if it was the man and the woman would have been stoned!” “I have spent a good part of my life in the Middle East – the lifestyle architecture is so perfect … dangerous electrics, also patriarchal – what say did the woman have? If she had been the one in the wrong, she’d have been stoned!! He didn’t go to the police because of the shame it would have brought on him!! Very powerful.” “Gripping from beginning to end.” “Gripping and intense. Beautifully acted.” “Excellent acting.” “Very well acted. Shame about the subtitles as they were difficult to read.” “Intriguing / excellent acting.” “Curate’s egg – subtle and naturalistic… motivation not always clear and parallels with Willy Loman hard to find, despite claims in notes.” “Extraordinary. A film that challenges our perceptions of exotic culture.” “Very moving – sad, sombre surroundings reflecting the difficult situation Emad and Rana found themselves in.” “Interesting cultural insights.” “First time – enjoyed.” “A subtle, if rather disjointed film, generating plenty of tension and suspense from workaday situations.” “A bit drawn out.” “The film however was spoilt by the poor quality of the subtitles which were often unreadable on white backgrounds – a shame.” “The subtitles against a white background in the first half prevented me watching all the action. Very good acting from key characters.” “At times too harrowing to watch.” “A very interesting unusual unique story.” “Thought there was going to be a twist but wasn’t!” “Difficult to read some of the subtitles. Great acting and atmosphere.” “Excellent and very deep….” “Gripping film.” “A strange story – deeply disturbing. Brilliantly acted. Usual problem with subtitles.” “Extremely well cast and acted. True to life – but revenge is bittersweet and not always the answer or provide the peace sought. “Tangerines” still takes number 1 spot for me.” “Slow build up, cinematography excellent. Interesting film.” “We never see the previous tenant – prostitute. Overhanging the entire film, had she (the wife) been raped? Husband was needing to justify what had happened to his wife. Shame and revenge the themes… Film was rather prolonged , pace got better. Excellent performances if not understated.” “Too theatrical and too long!” “Not sure what to think about this – maybe depressed!” “Pity about poor subtitles. Film good but - ” “Too long and laboured. Subtitles almost impossible to read on paler backgrounds.” “Felt inscrutable. Unpleasant.” “Unable to emphasise with any of the characters – any more than they could with each other. It was completely sterile.” “Still not sure whether I need to know the story of “Death of a Salesman”!”