A 13-year-old nomadic Mongolian girl fights to become the first female eagle hunter in twelve generations. Through breathtaking aerial cinematography and intimate vérité footage, the film captures her personal journey while also addressing universal themes like female empowerment, the natural world, coming of age and the onset of modernity. 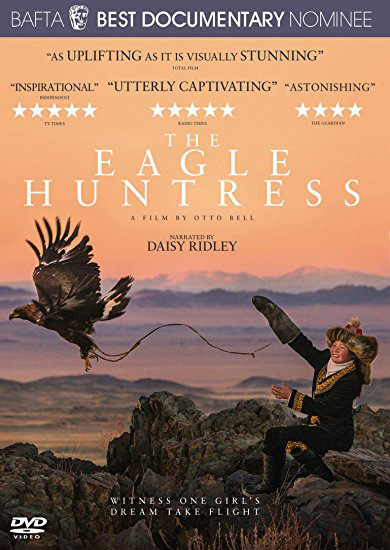 ‘You are awesome.’ These are words that every 13-year-old girl needs to hear from her dad. They’re much more helpful than ‘You are pretty’ or ‘You are nice.’ The dad doing the verbal high-fiving in this inspiring doc is Agalai, a Mongolian eagle hunter. Eagle hunting is a tribal tradition that goes back 2,000 years among Kazakh nomadic men, who ride out on horseback with an eagle across the frozen Central Asian steppes to catch foxes and rabbits. It’s a father-and-son thing. But enlightened Agalai understands that his pigtailed teenage daughter Aisholpan has the grit and talent to be a hunter. Aisholpan is one of life’s trailblazers – a feminist pioneer who would never in a million years think about herself in those terms. But hardwired inside her is the belief that girls can do anything boys can; and she’s got the iron will to prove it. Eagle hunting essentially involves riding a horse like the clappers holding a piece of raw meat while a golden eagle flies at you at 30 miles an hour, knife-sharp talons poised. It’s thrilling, and you can see why actress Daisy Ridley – tough heroine Rey in ‘Star Wars: A Force Awakens’ – signed up to narrate the film. After her training, Aisholpan’s dad takes her to the national championships, where she’s the first ever female competitor. What’s interesting is how standard sexism is across cultures. A bunch of miserable male eagle hunters dismiss Aisholpan: ‘Women are supposed to stay indoors’ and ‘They get cold.’ Then, when she starts winning, they switch tactic, the hypocrites:‘It helps that she’s a girl’ – as if somehow that explains her skills. You want to know more about what Aisholpan is thinking behind that shy determined smile. But that’s not her way. You can imagine her as the gutsy heroine of a Disney animation.

OK, I’ll come clean: I didn’t know that much about the nomad Kazakh minority living in Mongolia before I saw this documentary. Their facial features are east Asian, their writing is Cyrillic and their language is peppered with the inshallahs of other Muslims. The snowy, rocky terrain of the Altai mountains is gorgeous and inviting, but also treacherous. Most fascinating is their working relationship with the magnificent golden eagles of the region. Captured at just the right moment of growth – old enough to fly, but still young enough to get yanked from a nest – they are trained to aid in foxhunting, but only for seven years, before they are returned to the wild. It is a noble tradition, but, as with traditions of many cultures, certain aspects of it can use a rethink. Enter Aisholpan, a rosy-cheeked, exuberant 13-year-old daughter of an eagle hunter with a natural propensity to follow in her father’s footsteps. Despite some allowances for modernity (solar panels on their yurts), there are certain things the elders will not allow. Girls cannot eagle-hunt. In a montage in which these nasty crypt-keepers may as well be twirling their moustaches, they fold their arms and say things like “women get cold!” and “she’ll have to get married soon anyway!” The Eagle Huntress is here to prove these coots wrong. What’s more, Aisholpan completes her training with a look of such glee it’s a miracle she didn’t melt the ice from the highest peak in Mongolia. First, she must find and wrest an eagle away from its mother. The eagle-napping involves climbing down the side of a cliff, and it’s here where it becomes evident that director Otto Bell isn’t too worried about mixing in re-creations with his footage. But even if Aisholpan’s training – which includes hoodwinking, responding to calls, dragging dead foxes and other hallmarks of falconry – is for the camera, it doesn’t make it any less extraordinary. Especially in this remarkable environment, captured in breathtakingly crisp digital video. The movie needs a centerpiece, though, so Aisholpan ends up entering the community’s annual Golden Eagle competition. Despite some raised eyebrows, she is allowed to compete: she’s not only the first female, but the youngest entrant. Does she do well? Does her majestic eagle swoop down from the top of a mountain when she whistles, grabbing on to her protected forearm with cinematic gusto? I’ll let you figure that one out. In addition to the feelgood, family-friendly aspects (along with Daisy Ridley, Star Wars’ Rey, narrating), there are wonderful glimpses of this unique society’s non-ornithological customs. Even the villains, those nasty jerks trying to keep a young girl from her dreams when she so clearly has a natural gift, are elegantly framed, with dazzling decor in their traditional dwellings. The Kazakh nomads may not have many material things, but what they do have doesn’t want for style. The closing theme from Sia, with the refrain “you can do anything” sung over and over, is perhaps a bit literal, but some aspects of the film are more nuanced. There’s also just enough red in tooth and claw in the foxhunting moments to claim verisimilitude, but not so much that children will be vomiting into their popcorn. The Eagle Huntress will glide into awards season nicely.
Jordan Hoffman, The Guardian,September 8 2016 Toronto film Festival

What you thought about The Eagle Huntress