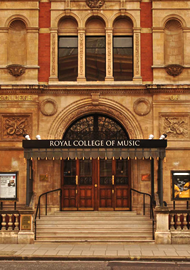 The Godalming Film Society have sponsored one of the final steps in the post-production stages for The Burning by paying for a recording session at the Royal College of Music.

A young composer, conductor and arranger, Benjamin Woodgates has scored the entire soundtrack for the 20 minute film and on Sunday 17 May 2015 I was invited along to witness the recording session and get some footage to show you what went on.

Arriving at 2:30 pm I was met by Ben (in the centre below) and Dominic Lees (on the left), the film's director, and shown down to the studio in the depths of the college. It has been about 25 years since I have stepped foot in a professional studio, and I was very impressed by the standard of the sound stage, the control booth and all the microphones and systems that were in place. Also in attendance was Jean-Paul, the film's Producer (on the right). 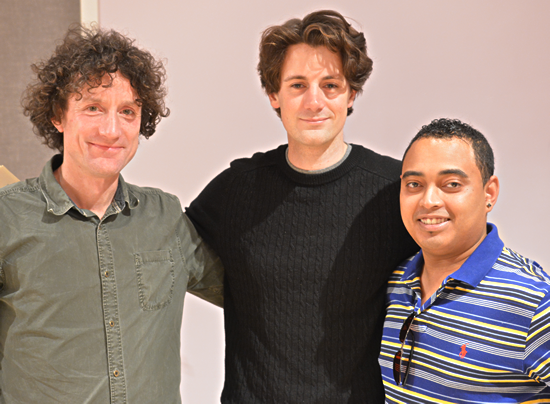 The Recording Engineer, with seven years' of experience in this studio, was Stephen Harrington (on left below), ably assisted by the Recording Producer, Edmund Thomson Jones (on right). 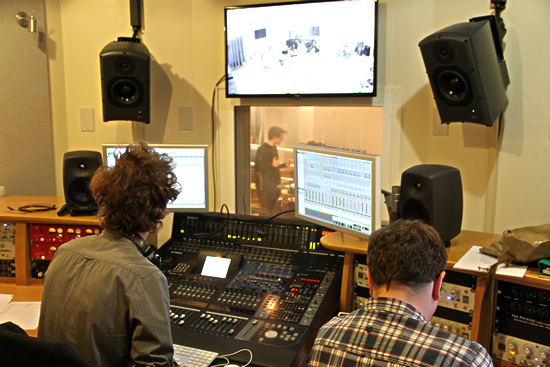 The first part of the afternoon saw Ben conducting a quartet from Birmingham from 15:00 to 18:00 hrs, going over the very intense phrases and sections of the music that the strings were there to record.

The quartet were, from left to right below, Sara Gale on cello; Patricja Stepien on violin; Elsabe Raath on first viola and Sarah Farmer on second viola. 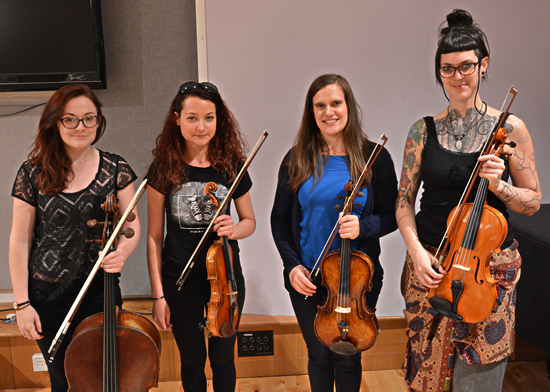 After that, Emily Bloom (below) turned up with a very old-style wooden flute and recorded some of the most haunting sounds I have ever witnessed a musician produce live. She had incredible control, innovation and empathy for the score, being asked to ad-lib sounds over some of the strings that had been recorded earlier. 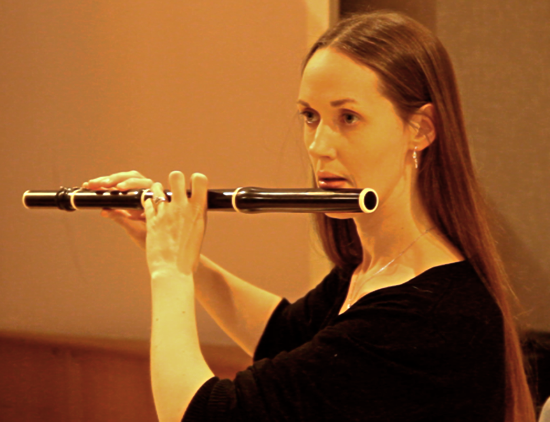 After the session we all retired to the local pub for a quick drink and wind-down discussion about the session and music for film in particular. I was able to quiz Ben further about the process of writing for film and here are some of the insights he shared.

Whilst we had been recording I had noticed that the majority of the music had been played to the tempo of a "Click Track", heard by the musicians through one-ear headphones, and that some of the recordings had been done without the imposed tempo and I asked Ben why that was.

He told me that most of the music had been written to the story and imagery of the film and that the click track helped ensure that the final score was exactly in time with the specific events happening in the film. He explained that when he starts to write for film he watches the edited images and gets a feel for the tempo and timing of each scene or sequence of scenes and then works backwards from knowing how long the piece needs to be, to assessing the tempo to get the right feel for the film and then working out where the hit points need to be to emphasise the action on screen. Everything is then written to match.

The parts of the recording where he basically let the musicians have free reign were for sections like the end credits where there were no specific timing requirements and this gave the musicians the ability to really get into the flow of the music and bring it to life as a quartet.

Dominic then told me that the next step is to go through all the individual recordings (of which there were over 100 in the 4 hours we were there), and splice together all the best takes to get as good a final selection as possible for the film. Once that was done, and the other tracks for drums and all the other instruments were completed by Ben, the film would have the sound track added and would then only require some final touches to have it ready for us sometime in next season's programme.

The video below is a collection of some of the takes from the day, and should give you more of a visual insight to some of what went on.