A high-class heist to steal a priceless 137 carat diamond being sold at auction is the premise for this good-looking crime caper. 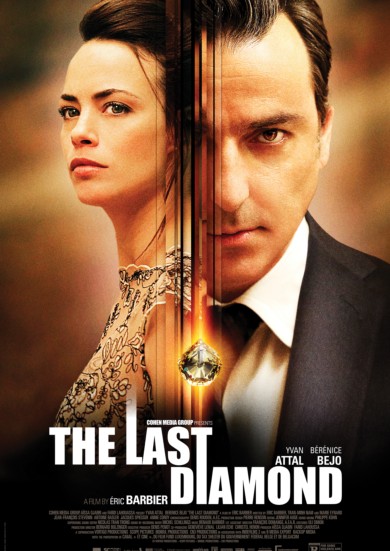 From Rififi to The Red Circle to the seldom seen Mélodie en sous-sol, the French used to make some of the best heist movies around. While that hasn’t been the case for a long while, writer-director Eric Barbier’s latest robbery riff, The Last Diamond (Le Dernier diamant), represents a worthy attempt to revive the genre in Gaul. Featuring strong performances by stars Yvan Attal (Rapt) and Berenice Bejo (The Artist), this classically helmed caper is neither groundbreaking nor entirely convincing, but offers up enough hooks to keep things alive through the final reel. A pre-Cannes release on home turf should see a modest box office steal, while Diamond may be slick enough to score offshore sales, not to mention a potential Stateside remake.

Conniving professional safecracker, Simon (Attal), is currently out of jail on parole, which doesn’t stop him from engaging in some low-level larceny along with his favorite partner-in-crime, Albert (Jean-Francois Stevenin). When the latter gets them on a major job trying to swipe the legendary Florentine diamond -- valued in the film at €40 million ($55 million), although in real life it went missing during WWI and has never been found -- Simon uses his thieving skills to seduce the beautiful Julia (Bejo), who’s been put in charge of the jewel's auction following her mother’s mysterious death.

Like many a solid heist flick, this one spends a good portion of its early and mid-sections setting things up for the big day, with co-writers Barbier, Tran-Minh Nam and Marie Eynard throwing in plenty of bogies as Simon heads to Antwerp and swindles Julia into an affair. While the unlikely lovebirds are never quite believable on screen, their relationship provides some of the film’s more memorable scenes, including one where Simon has to steal a key from Julia’s hotel room and winds up in between her sheets.

Rather than saving the final robbery for the third act, Barbier stages it earlier on, with Simon and his cohorts -- including his ultra-shady boss, Scylla (Antoine Basler) -- laying their hands on the precious stone as Julia realizes she’s been had from the get-go. It’s at this point that Diamond veers away from convention and provides a few unexpected late twists, although everything winds up coming down to a love story between thief and fall-girl that never works in the way of say, the original The Thomas Crown Affair, or else the many George Clooney-Julia Roberts tiffs of Ocean’s 11.

This isn’t to say that Attal and Bejo aren’t strong in their respective roles, and the former is especially good as a hardnosed criminal who finds himself blindsided by romance. But their characters are never given enough time to develop amid lots of  plot mechanics, and once all the double-crossings and false leads are used up, what’s left is a movie as shiny, sparkly and translucent as the Florentine itself.

Like in his stylized 2006 thriller, The Serpent (also starring Attal), Barbier provides an extremely polished sheen to the proceedings, with cinematographer Denis Rouden (36th Precinct) using a warm and moody color palette to capture locations in France, Belgium and Luxembourg (unlike many co-productions, this one at least finds legitimate excuses for all the border crossings). Renaud Barbier provides a whimsical jazzy score for a crime that’s never meant to be taken too seriously.

The heist here is entertaining enough, but sluggish pacing and the lack of sparkle between the lead actors takes the shine off things.

If the perfect crime caper movie should be as slick and effortless as a well-oiled machine, this French diamond heist thriller trundles along like a jalopy that is missing a few crucial cogs. Writer/director Eric Barbier ticks the right boxes – the brassy, swaggering score sounds like offcuts from David Holmes’ work for the Oceans series; the backdrop, an auction for a 137-carat diamond, is suitably glitzy. But the pacing is sluggish and, for all the glinting, multifaceted precious stones, there is little sparkle between conman and heist specialist Simon (Yvan Attal) and glamorous but conveniently credulous auction organiser Julia (Bérénice Bejo, rather out of her depth). The heist itself is devilishly convoluted, but entertaining enough. However, whatever momentum the picture had accrued is lost in an increasingly absurd third act in which Simon must redeem himself and clear the name of the woman he set out to rob.

What you thought about The Last Diamond

50 people watched our final streamed film of the season. The comments from some of those are below:

"Excellent choice for last of the season. Slick, complicated heist - so very French! Thanks to everyone for keeping the show on the road and looking forward to the next season."

"Brilliant end to the season. Thank you for a real gem of a film."

"Apologies for being a party pooper about this film..

There were shimmers of brilliance and style but not tight and pacy enough for my kind of heist movie. There were some nice touches throughout and it looked gorgeous ( who doesn't love a diamond!) I felt that the last half hour was rather spun out ; however, a nice film to finish the season on."

"Were the film makers trying to marry the tongue in cheek style and laconic heroes of French crime movies of the sixties (Shoot the pianist springs to mind) with Clooney and Co's hi-tech Hollywood spectaculars of more recent years? There is a certain jarring of tones here, the most obvious being Simon/Julia's romance which never convinces, Simon is no Danny Ocean. Though the balance between humour and violence is also problematic it rattles along with along with enough Gallic charm to be decent fun."

"Opening resembles a crime-based, possibly predictable rom-com, yet then changes gear to be more interesting and action-packed. Quite enjoyed it as a smooth movie. Kept thinking does this want to be serious? Moves steadily as a crime tale threaded with cool con-men, a beautiful woman and lies. Questions of honour and pride amongst thieves, fear, greed and love, that steer the habits and impulses of human beings. Seemed to rely on social engineering and emotional conflict, with many tricks and plans that make up a large portion of its appeal. Sometimes the plans seem a little outlandish, needing a reaction from someone. We see an occasional slip-up in the social fabric, which helps with the realism and flow of the film and create the biggest problems being the basis of the real action scene. But did like Simon not being perfect at all, even though the ending gave a sour taste because we've seen it many times. The wrap up felt a bit ribbon tied - French romantic myth mixed with modern cinema - so perhaps a one-time watch; not one that really sticks in the mind. But thanks for a good eclectic film season - really enjoyed it in the midst of these difficult times"