In a war-torn village in Nepal two boys bond through their affection for a hen. When the hen is sold by the father of one of the boys, they desperately attempt to raise funds in order to buy it back. 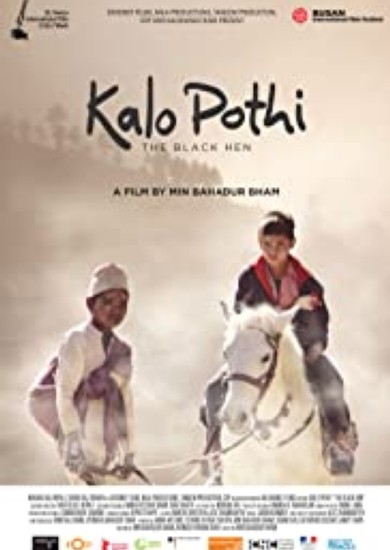 Nepalese filmmaker Min Bahadur Bham’s impressive first feature – the winner of International Film Critics Week at Venice last year – closes with a quite baffling piece of political nit-picking: “During the 10 years of Maoist Insurgency (the so-called civil war) in Nepal, 1996 to 2006 – 13,346 were killed, 14,000 migrated to India, 8,000 children . . . joined Maoist militants.”

One expects to see so-called, that promiscuously used clause, in all sorts of inappropriate contexts: say, “your so-called film review”, or “your so-called corporate tax return”. But these tragic numbers, not to mention the abolition of the Nepalese monarchy in 2008, surely represent a civil war?

The facts and figures are all the more puzzling arriving, as they do, as a closing scroll rather than an opening gambit. During the film – Nepal’s submission for the foreign-language category at the 89th Academy Awards – the viewer must, alone, decipher the military drills and pageantry on screen. Mostly, in keeping with the hazy understanding of the two main characters, the war is a distant backdrop and certainly not nearly so important as the titular fowl. Kiran (Sukra Raj Rokaya) and Prakash (Khadka Raj Nepali) are two young boys, hailing from different castes; one is the village headman’s grandson, the other is the son of a servant.

They are bonded, nonetheless, by friendship and affection for a hen, whose eggs just might make a difference to Prakash’s impoverished family. When the boy’s father sells the bird, the chums desperately attempt to raise funds in order to buy it back. As much as they love the hen – and their affection is genuinely affecting – there is even more at stake. Prakash seems to believe that if they can rescue the precious bird, then Prakash’s sister, who has run off to join the Maoists, will also return safely.

With a nod to Robert Flaherty’s ethnographs, director Min Bahadur Bham conveys a sense of centuries of unchanged, pre-industrial living, suddenly encroached by modernity. Kazakh cinematographer Aziz Zhambakiyev finds interesting textures and colours in a forbidding landscape. Perhaps unsurprisingly, the natural performances of two boys (and their chicken) are the best things about the movie; that is just as it should be. Fowl are friends not food, they insist, just in time for Xmas.

A gentle, humane and beautifully photographed movie from Nepalese director Min Bahadur Bham, whose short film The Flute and then this debut feature were hits at the Venice film festival. It is set during the Nepalese civil war of 1996-2006. Two village boys try to recover their hen, which had been sold without their knowledge to an old man (called Tenzing – a name with great resonance for the British and for climbers of any nationality). Eventually they steal it back and try painting it black to disguise it. And all this happens while fanatical Maoist guerrillas make incursions, kidnapping villagers. Scenes of bucolic calm are interspersed with brutality and violence. There is an all-but-unwatchable moment when the boys smear blood over their faces and pretend to be dead bodies so that the communists will not kill them. This is an engaging movie and a valuable debut, notable for disturbing and unexpected dream sequences, tapping into the boys’ deepest fears – sequences that reminded me of Buñuel’s Los Olvidados.

As it begins as a child-height tale, "Kalo Pothi", discovered at the Venice Film Festival's Critics' Week in 2016, gradually turns to the epic of two adult-monkeying kids, and having to integrate into a changing world. It is, in fact, in the context of the Maoist uprisings from 1996 to 2006 that this story, as touching as it is funny, is taking place. For the children make the four hundred moves, first facing the patriarch who sees in the sale of the hens a significant gain (but that remains potential), then a grandfather from another village, supposed to have recovered the animal. They will even go so far as to paint one hen in black in an attempt to make it look like another.

Punctuating his tale of various dreams, one of which put monks and soldiers face to face in a monastery, it is towards the war that Min Bahadur Bham advances his characters, to the innocence undermined. Faced with the reality of the evolution of the adults around them, and especially the hero's sister, it is to a new world at war that they will confront. There remains an original tone, which highlights the freshness of childhood and the nature of Nepal.

The rarity with which we find Nepalese productions around here would already be a very reasonable reason to be interested in this film. Distributors even highlight the fact by entering the name of the remote Asian country in the title in Portuguese. However, the attractions in 'On the Roads of Nepal', Min Bahadur Bham's first feature film, go beyond the natural curiosity that such an exotic and distant culture of the Western world awakens us.

There are, of course, the stunning landscapes, typical of a territory formed, basically, by mountains. And they're not any peaks, but the biggest in the world. However, the visual aspect stands out, above all, by the interesting photograph of Aziz Zhambakiev. Its light decisively drives moments of fundamental beauty and narrative sense. Especially the dream scene: perhaps the great moment of the film, the cry for religious tolerance that Bahadur Bham brings us.

We are in 2001, in the midst of a brief ceasefire during the local civil war (1996-2006). In an isolated village, we meet the little protagonists, Prakash (Khadka Raj Nepali) and Kiran (Sukra Raj Rokaya). Although they belong to distinct social castes, play and attend school together, demonstrate the loyalty and complicity that only best friends can have. It remains for the boy to share the precarious conditions in which he lives with the rudimentary and unaffectionate father. Quoting Beatles, a weight Prakash will have to carry. And for a long time.

Showing the tension of a war that inevitably approaches from a child's point of view is nothing
new. 'The Labyrinth of the Faun' (2006) is a good recent example. However, Bahadur Bham and his script partner, Abinash Bikram Shah, hit the hand by conveying with the naturalness and subtlety necessary the idea of the child who is naïve, but at the same time able to grasp and assimilate facts with the depth that any adult would handle. That is, the boy sees the war and apparently does not know well what it is, when in fact, at some level of consciousness, he knows even more than he himself imagines - we return to the scene of Prakash's dream. The perception of children and youth is, in fact, something powerful.

The filmmakers are even happier drinking from the fountain of Iranian master Abbas Kiarostami (1940-2016). There's in 'On the Roads of Nepal' a good bit of 'Where's My Friend's House?' (1987) that definitely buys the viewer, starting with the scenes in the school environment. And what's the embarrassment about that? No. Masters are there for their works to be absorbed and perpetuated, including through appropriations and rereading’s. Especially when well executed, as is the case.
Our hero's journey takes place when the chicken her sister left for Prakash is sold by her clumsy
father. The affection for the bird makes the boy not hesitate to leave behind it - we get to the roads mentioned in the title. So, like Kiarostami's film, we have a boy who doesn't take efforts and distances to achieve what he's looking for. The characteristic geography in both is equally important to emphasize the idea. The difference is that here his friend and study colleague, Kiran, leaves together in his aid, instead of being, himself, the object of the search.
Likewise, there are occasions when we see adults completely oblivious to the thinking of the younger ones.

Even the misplaced scolding of the grandfather of one of them is an evident echo of Kiarostami's work. In other things, the keynote in both productions, in addition to the value of friendship, is the same: children are not properly understood, and the world could be much better if they were.

What you thought about The Black Hen [Kalo Pothi]

46 users logged in to watch Kalo Pothi, The Black Hen. These were the responses we received:

"The film was uneven in its handling of the initial charming story of the friendship of two boys against the backdrop of very serious civil strife in Nepal. Forgive the pun, but it was neither fish nor fowl! However the boys playing the main characters were good, especially Prakash. And it was a fascinating insight into the culture of this remote country. In the end, it became a coming of age film where children are forced to conform into the harsh and unforgiving adult world."

"Fascinated by this film as I have been fortunate enough to visit Nepal in 2002 when Maoists were in action. It was interesting to see the tactics used on poor villagers to lure or force them into joining the cause. The filming was very naturalistic and the dynamic of the two boys from different castes being friends was touching as was their devotion to their hen."

"A very interesting film with a number of hypnotic, dream-like sequences before the outbreak of horribly realistic hostilities at the end. As ever, bewildered by the inhumane caste system."

"Another fascinating movie! I did wonder if it was not finished, as a central point was to show the war in a balanced way and not taking sides. Add to that a film made in such a rural area makes it worth watching with two boys from lives divided by caste and social creed, and their inseparable friendship. The long quiet shots have ponderous messages, a kissing scene seems strange in between such a story-line, offsetting humour against tragedy and a sensitive realism against ethereal dream sequences. Liked the boys' fanciful plans of making enough money to pay for Prakash's education and end his family's cycle of poverty being thrown into disarray when the hen goes missing, leading them to set off on a clandestine rescue mission. A warm human exploration of friendship threatened by both class and conflict"

"Not keen on this film, nor others of a similar ilk which seem to have been a feature of this season's programme. Unsure if I'm meant to value the worthiness of the choice, but it wouldn't be mine.

I long for something cultured/cultural, clever, witty, artistically challenging. This was just relentlessly dreary, much unexplained, characters difficult to relate to, as have been a number of other offerings this season. Bring us some joy!"

"An enjoyable and as Matthew said, informative film, eg that there was revolutionary war in Nepal, that they had a caste system.