A long-distance truck driver agrees to give a lift to a Paraguayan mother and her baby to Buenos Aires. Although not many words are exchanged, a relationship starts to form. 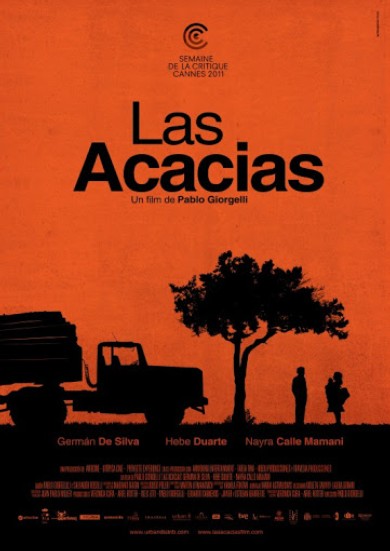 A genre-straddling gem from south America which leaves you breathless despite being almost wordless.

Arelationship movie, a road movie, a silent movie: Las Acacias is all these. Pablo Giorgelli has made a film that unfolds almost wordlessly, but very eloquently, and the unforced performances of its two leads make it absolutely beguiling. German de Silva plays Ruben, a middle-aged truck driver who has the regular task of hauling lumber from Paraguay to Buenos Aires. Yet this time he has a passenger, a young woman called Jacinta, played by Hebe Duarte, whom he is taking as a favour for a friend. To Ruben's very obvious dismay, however, Jacinta is bringing along her five-month-old baby. This was not part of the deal. With tremendous skill and easy charm, De Silva and Duarte show how the relationship between the two gradually changes. We appear to be living with Ruben and Jacinta in real time: just sitting there with them, mostly in silence. And yet, something is going through Ruben's head he is formulating an idea, and when we found out what that idea is, at the very end, it is exhilarating and moving. This is a very satisfying love story.

Beating a sweet retreat from exposition and event, the Argentine director Pablo Giorgelli turns his minimalist road movie, “Las Acacias,” into a swelling meditation on wounded hearts and rekindled hopes.

Here is what we know: Rubén (Germán de Silva), a dour, middle-aged truck driver, is transporting timber from Paraguay to Buenos Aires. His unseen boss has instructed him to give a ride to Jacinta (Hebe Duarte), whose 5-month-old daughter is an unwelcome surprise passenger. What we don’t know is legion — the origin of the scar beneath Rubén’s left arm, or why Jacinta declares that her child has no father — and will remain unrevealed. Yet as the journey progresses, this improbably romantic movie reels you in.

It is difficult to explain why. The scenery outside the truck window is not especially lovely (although the cinematography frequently is); the dialogue is devoid of drama; and the characters travel mostly in silence. There is no music, just the hum of the engine and the whoosh of passing traffic, and blessings of back story are only stingily doled out.

But when there’s not much to listen to, we watch more intently, noticing Rubén’s weathered face soften when he interacts with the ridiculously cute child, and Jacinta’s eyes warm in response. Trust grows in that silence, chipping away at barricaded emotions with palpable patience.

The very definition of modest, “Las Acacias” articulates emotional transformation with simplicity and grace. Rarely has a film managed to say so much while saying so little.

What you thought about Las Acacias

55 people joined in a screening of Las Acacias, which is currently sitting as the most well-received film of the season! Some comments from members who watched the streamed film:

"This is what good film does - pulls you completely and effortlessly into another world. No music soundtrack to influence what you feel or dialogue to explain things that don't need explaining, as the director relies on the intelligence of the audience to figure it out along the way. Every scene makes sense. And then the emotion which overtakes you and gives you hope at the end. Bravo!"

"This film is both subtle and entrancing. It appears boring on the surface with so limited a range of action and yet.... Pablo Giorgelli shows an amazing gift for saying so much with so few words and gives a masterclass in how to use a very young child to great effect."

"A wonderfully understated study of human needs and unexpressed thoughts. Loved the simplicity and slow development of their rapport. Of course, the baby was the real star. What a beautiful placid kid! Excellent viewing."

"I thought for once I would write my comments on the film immediately it ended otherwise I tend to forget and the moment has passed.

Las Acacias was a delightful film. A very gentle slow build up of the relationship between the driver Ruben and his passenger Jacinta and her baby. At first the rather ungentlemanly behaviour of Ruben made me dislike his character but as the film progressed my views changed. So little was said but much was conveyed by a sideways glance or a simple remark.

The hum of the engine became a peaceful background accompaniment to the journey and the slow growth of the relationship. The baby was a delight and Ruben soon fell victim to her winning smile. Considering the very limited extent of the action within the cab the film never became boring or tedious.

When they arrived in Buenos Aires I quite expected Jacinta to just get out of the lorry and for the film to end there. I was pleased that you were left with the hope that something further might come out of their relationship.

It reminded me of many chance encounters in life when you speak to someone and feel an immediate rapport but very often nothing comes of it and you move on and forget. It also reminded me of motoring holidays when you spend long hours in the car and it becomes an almost womb like sanctuary from the outside world. It is a small world of the dashboard, assorted rubbish, the CD player and the view through the windscreen but for that period it is your temporary home and you miss it when it is gone."

"What a lot comes out of so little. Very satisfying road movie speaking volumes for those with little to say for themselves. Really pleasing that she received such a warm welcome in Buenos Aires - feared the worse throughout the film."

"Not a road movie as the convention is, even though for about 30 minutes I thought that it could be. Wondered if the lift was a dodgy arrangement, with Jacinta paying Rubén's boss to help her get out of the country. However, it turns out to be pretty much above board. Unlike the road movie heroes of old, driving is Ruben's profession and it isolates him. Hauling timber from one place to the next, deprived of any human contact, he sees Jacinta and Anahí as a mere inconvenience. But in spite of Rubén's detachment and Jacinta's timidity, a bond of affection grows. Despite what might seem corny, their relationship unfolds in a completely natural way, emanating out of brief conversations and fleeting glances. A lot of scenes of two people sitting quietly in a cab could challenge anyone's boredom threshold, but it doesn't drag: a feeling of truthfulness that compensates for the absence of action. Liked the framing, the sense of movement; clever development of Anahi as a connection with subtle edits to show her as that. In spite of being almost unremarkable by design, its understated quality tells in the end moving softly to a bittersweet ending and it's almost heartrending"

"'I am the passenger' as Iggy once sang. As we are here in a film that moves at a similarly unhurried pace as the lorry in which it is largely set. Like all passengers the mind wanders with the lustrously evoked sun, dust and traffic noise and we ponder the vast depths of backstory that must lie beneath the tiny islands of past history we are given glimpses of. Each one of which makes the characters a little more rather than less complex. And the lorry rumbles on ...and then, rather suddenly, we have arrived and are rather shocked to discover how unknowingly we've invested in the characters and how earnestly we are pressing for Ruben not just to walk away. Like the last film it asks; how much narrative do you really need? and wins in a completely different way. A very surprising film."