In a Better World [Hævnen]

Anton is a doctor who commutes between his home in Denmark and his work at an African refugee camp. In these two different worlds, he and his family are faced with conflicts that lead them to difficult choices - revenge or forgiveness. 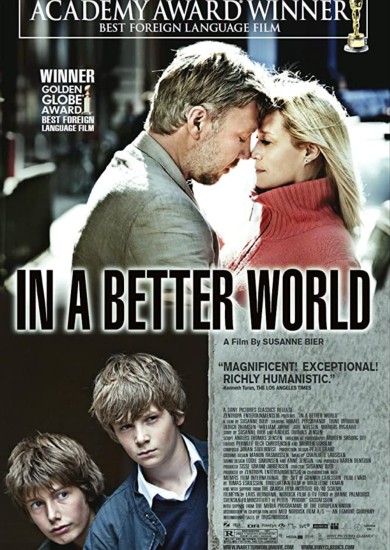 How do we react to the presence of evil and injustice when, as an adult or a child, it intrudes on our world? It’s easy enough to say “you fight it,” but the reality is never that simple. When do we act, how far do we go, what price are we willing to pay? When, if ever, is retaliation legitimate? How do we deal, finally, with the pain and suffering of the world?

The Danish filmmaker Susanne Bier has a potent gift for turning abstract, moral questions like these into edge-of-your-seat compelling dramas that examine, with devastating effect, the complex web of feelings that make us who we are. With “In A Better World,” which deservedly won this year’s best foreign language Oscar, she has outdone even herself.

As in earlier successes like “Brothers” and “After the Wedding” (impressively written, as is “Better World,” by Anders Thomas Jensen), Bier displays an intuitive grasp of where the strongest dramatic moments are in a given situation and a fearlessness about putting them on-screen.

Bier also knows how to gracefully enhance emotional connection without pushing too hard, how to ramp things up without losing control. The result is the kind of realistic, involving adult scenarios that Hollywood mostly only dreams about these days. No wonder this story of parents and children in explosive crisis won that Oscar.

As in those previous films, “In A Better World” uses the international community as part of its framework. The two families it presents lead separate lives that take individuals far from home, but a small Danish community ends up being the focus of events.

“Better World” in fact opens in a bleak, inhospitable refugee camp in Africa, where Anton (Mikael Persbrandt of Jan Troell’s “Everlasting Moments”) is exhausted physically and emotionally by his work as a doctor.

As if the usual depredations of disease weren’t hard enough to deal with, Anton has to try to save the lives of pregnant young women who are cut open by a sadistic local warlord given to making bets on the sex of unborn children.

Anton commutes between Africa and his home in Denmark, where his marriage to Marianne (Trine Dyrholm), also a doctor, is falling apart. The separation is especially hard on 10-year-old Elias (Markus Rygaard), a sweet-faced boy whose passivity inevitably attracts the bullies in his school.

After Africa, “Better World” takes us briefly to London, where Claus (Ulrich Thomsen, like Dyrholm a veteran of “The Celebration”) has just lost his wife to cancer.

Though Claus is understandably distraught, the film focuses on his young son Christian (William Johnk Nielsen). A stern boy who manages to stay composed though he is clearly upset, Christian seems almost frighteningly self-possessed.

With his wife dead, Claus moves his son back to Denmark to live with the boy’s grandmother — to the same town, in fact, where the doctor has a home. Christian ends up becoming a classmate of Elias’ and the boys become friends after Christian, offended at the way Elias is treated, acts in a way that ensures that the bullying comes to an end.

The Swedish title for “In a Better World” is “Haevnen,” or “Vengeance,” and it refers in part to Christian’s state of mind. He’s a boy with a lot of fury in him who sees himself as a righteous soldier compelled to exact justice, even revenge, for the wrongs of the world. It’s a notion that terrifyingly complicates what is to come as the film’s plot kicks into a higher gear.

One of the places where “In a Better World” is especially successful is comparing and contrasting the moral worlds of children and adults, showing how difficult but essential it is for each group to learn from the other.

It’s as if the differing age groups speak different languages. The nuances of behaviour that mean so much to adults don’t resonate with children, while the burning intensity the children feel doesn’t register at all with their parents. It’s a dissonance that can have disastrous consequences, and “In a Better World” plays that powerfully disturbing outcome for all it’s worth.

This well-acted, well-made Danish movie was the unexpected winner of the latest Oscar for best foreign language movie in a year that saw such films submitted as the French Of Gods and Men, the Algerian Outside the Law and the Thai Uncle Boonmee Who Can Recall His Past Lives. It's a highly schematic piece about violence, bullying, pacifism and turning the other cheek that begins with the experience of two 11-year-old, middle-class lads from troubled families successfully confronting their classroom tormentor. This encourages them to seek revenge on a xenophobic psychopath after the father of one of them refuses to retaliate following a mild but humiliating assault.

The father is a Swedish doctor on leave from a refugee camp in Africa who is sorely provoked when a sadistic local warlord, with a reputation for mutilating and murdering, comes in for an operation. The movie holds your attention, but you leave discussing the manipulative plot rather than the moral issues it raises.

What’s the point of turning the other cheek if that one gets slapped as well? If we tolerate the playground bullies of today, are we not creating the despots of tomorrow? Does doing good do any good?

These and other questions are posed in Susanne Bier’s Oscar-winning drama, in which the well-intentioned acts of a Swedish aid worker in Africa contrast with those of two damaged boys in well-to-do Denmark.

But it’d be wrong to suggest that Bier and her regular scribbler Anders Thomas Jensen are just ticking off boxes, even if Better World does have a more conventional flavour than their earlier collaborations Brothers and Open Hearts.

What it shares with those titles is a compelling sense of purpose. Bier sets out from the off to challenge her audience with a series of thorny moral quandaries.

The clearest one is whether Anton (Mikael Persbrandt), a pacifist surgeon at a Kenyan refugee camp, should treat a local gangster who routinely murders and mutilates the same people he is trying to help.

But the story is more ambiguous when focusing on Anton’s persecuted son Elias (Markus Rygaard), a school misfit whose joy at finding a new protector in William Jøhnk Nielsen’s Christian is tempered by the latter’s taste for homemade pipe bombs.

Steadily ratcheting up the tension as she builds towards a literally explosive climax, Bier asks what we would do in the same situations. But perhaps her greater achievement is in prompting such accomplished performances from her callow leads, Nielsen proving particularly effective as the youth whose grief manifests in chilling outbursts of anger.