Elena is the submissive wife with a grown up son, and lives with her wealthy second husband who makes a will leaving everything to his daughter. Desperate to not lose an inheritance for her son, she sets in motion a series of events. 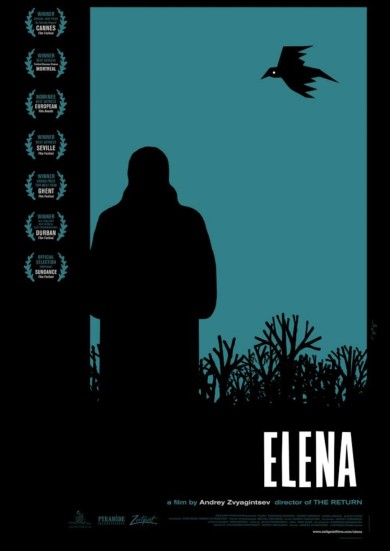 Dark, Darwinian Struggles in the Jungle That Is Moscow.

Post-Soviet Russia in Andrei Zvyagintsev’s somber, gripping film “Elena” is a moral vacuum where money rules, the haves are contemptuous of the have-nots, and class resentment simmers. The movie, which shuttles between the center of Moscow and its outskirts, is grim enough to suggest that even if you were rich, you wouldn’t want to live there.

For Mr. Zvyagintsev, whose first feature, “The Return,” won the grand prize at the 2003 Venice Film Festival, it is a brilliant comeback after “The Banishment” (2007), a disappointing film that was not released in this country. “The Return” had established him as perhaps the foremost artistic heir to Andrei Tarkovsky.

In “Elena” the title character (Nadezhda Markina), a stout, copper-haired woman in her late 50s or early 60s, shares an elegant, gadget-filled home near the Kremlin with her wealthy older husband, Vladimir (Andrei Smirnov). You are keenly aware of the distance between Elena, a former nurse from a proletarian background, and the imperious, hard-nosed Vladimir, whom she cared for while he recovered from peritonitis a decade earlier and then married. It’s not that they loathe each other. When he signals that he wants sex, she matter-of-factly obliges him.

Both have children from previous marriages. Vladimir is estranged from his bitter, entitled daughter, Katerina (Yelena Lyadova), who lives solely for pleasure on the money he sends her. Elena’s unemployed son, Sergey (Alexey Rozin), whom she regularly visits in Moscow’s crumbling industrial fringe, is a heavy-drinking lout who shares cramped quarters with his wife and two children.

Elena always brings money. When Sergey tells her that his surly teenage son, Sasha (Igor Ogurtsov), will have to join the army unless Sergey can buy the boy’s way into college, she promises to help, although Sasha has no interest in his studies. Any money she brings has to be wheedled out of Vladimir, who despises her family and its slovenly ways. When Elena returns home and pleads Sasha’s case, he balks.

Elena and Vladimir may live in splendor, but their upscale neighborhood is weirdly devoid of people. An ominous calm hangs over the area, except for the cawing of crows, which can be heard indoors as well as out. And the movie’s acute aural awareness of the animal kingdom within the city underscores its vision of Moscow as a jungle teeming with predatory wildlife.

The only time the camera loses its poised, watchful attitude is during a teenage brawl in the junk-filled field outside Sergey’s house. Filmed with a hand-held camera, the fracas suggests a bunch of wild dogs tearing at one another.

Vladimir’s apartment is a different kind of jungle. The television is tuned to dreary game, cooking and talk shows, and you are uncomfortably aware of the sounds of appliances and of sliding doors and curtains.

Elena and Vladimir’s marriage reaches a crossroads when Vladimir has a heart attack while swimming and is again dependent on her care. Katerina visits him (at Elena’s insistence) while he’s in the hospital, and the father and daughter, after years of mutual hostility, discover a ghoulish rapport in their shared nihilism. Katerina now drinks and takes drugs only on weekends, she announces sardonically, but is “still getting food and sex under control.”

When Vladimir suggests that having children might give Katerina a purpose in life, she sarcastically replies: “What’s pointless is producing offspring you know will be sick and doomed, since the parents are sick and doomed themselves. And the world will end soon, in case you haven’t heard.” Vladimir is perversely tickled by her blasé attitude, and these soulless soul mates embrace, their rift mended.

Her words resound through a film that suggests that in this quasi-feudal social environment, avarice and blood ties trump all other values.

Summoning Elena to his bedside, Vladimir stuns her by bluntly announcing that he is about to prepare his will in which he leaves almost everything to Katerina, while providing Elena with a life annuity to be distributed in monthly payments.

“And what about Sasha?” she asks.

“Your son should be taking care of his own son,” he replies sternly.

Because Vladimir’s lawyer is to arrive the next day, Elena makes an impulsive, fateful decision that casts her in a different light. But the screenplay, written by the director with Oleg Negin, recognizes her humanity. Even as Elena contemplates the unthinkable, Ms. Markina’s grand, subtle performance reinforces the film’s view of her as its most compassionate character.

Of course, that isn’t saying much about these products of rotten seeds, locked in a life-or-death Darwinian struggle.

The corrupting power of money runs through the veins of this superb Russian film like formaldehyde flowing through a corpse. The story has an eerie, powerful simplicity: a well-meaning former nurse from a modest background, Elena (Nadezhda Markina), lives with her wealthy husband, Vladimir (Andrey Smirnov), in a luxury, modern home. Her penniless son from her first marriage, Sergei (Aleksey Rozin), wants money for his son’s schooling, but Vladimir is uninterested: he controls their finances with a calm, iron will. His own virtually estranged and difficult daughter, Katerina (Elena Lyadova), from his earlier marriage is a drain on his emotions already. When Vladimir falls ill, and questions of inheritance arise, Elena must act to secure her future.

This is a bleak, mysterious tale, resolutely local and contained in its surface interests. But you can’t help wondering what director Andrey Zvyagintsev (this is his third film after 2003’s stunning ‘The Return’ and 2007’s less satisfying ‘The Banishment’) might be saying about the state of Russia and, specifically, the transition from the Soviet era. The parallels are tempting: an unhappy but controlled situation turns to anarchy; plans for the future are too late and hijacked for personal gain; and, by the film’s final frame, the devil we once knew somehow inspires nostalgia. This is smart, gripping cinema.

What you thought about Elena

"Bleak but captivating. The sealed calm in the Moscow flat slides into that grim housing estate through bus and train trips moves from suggestions of disquiet to fear and and anxiety. The gradual unravelling reflects in Glass' Symphony No. 3 and the chatter from TV. Thought this was about survival at a cost with some striking performances. Sometimes I was almost scared to look ..."

"What are we supposed to draw from this? Don't get between a mother and her children (however feckless they might be)? Fear the poor? The cinematography is stylish, looking more Japanese than Russian and Elena's impassive face is beautifully shot but the plot has something medieval about it, a post industrial 'Macbeth'. Looks good but hard to warm to".

"Glacially slow, for the first 5 minutes I thought my broadband/wifi had frozen. The only redeeming features were excellent acting and the Philip Glass music".

"There was just something about this film which was mesmerising. The long takes, the muted colours (and muted emotions), the spare and infrequent music. The feeling of being pulled into a world at once recognisably domestic - a marriage - yet undercurrents of non-muted emotions. Then the drama unfolds and we see the wider familial dynamic. What are we born into, what do we inherit, what choices do we make? I felt we were in the hands of an assured director / auteur".