This documentary follows one of the last wooden boatbuilders in the Grenadines building his final sailing vessel before his skills are lost forever.  Plenty of island humour while "sampling" Caribbean life! 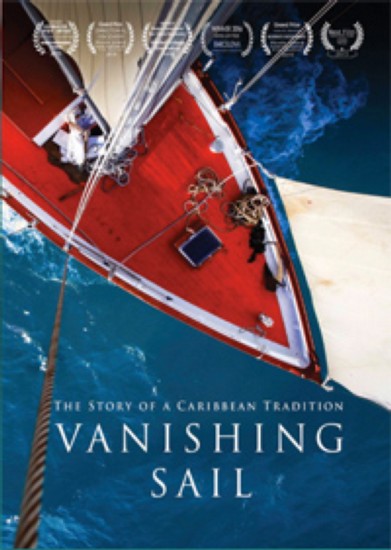 One highlights of the Halifax Boat Show for me was the showing of the film “Vanishing Sail”. When I sailed in the Caribbean in the late 1970s there were still a fair number of vessels trading under sail. I remember watching a sailing “lighter” arriving in Nevis loaded with supplies (mostly Heineken, plus one goat).

Today the working sail vessels are gone. This beautifully shot documentary tells the story of Alwyn Enoe, one of the last boat builders in the Grenadines and his determined efforts to build his last sailboat and pass on the skills, learned from his Scottish ancestors, on to his sons.

You don’t have to know anything about the West Indian boatbuilding traditions to get caught up in the story as Alwyn struggles with deadlines, money and family to see his dream fulfilled. There is plenty of humour, and a cast of characters that keep things moving along. The last part of the film has some great sailing, including Antigua Classics.

Two years after it was released, I finally got a chance to see Vanishing Sail, at a screening at the WoodenBoat Show at Mystic a few weeks ago.

This is the film shot by fashion photographer Alexis Andrews, a sailor and classic boat enthusiast who like many people fell in love with the Carriacou sloops, built on a beach on the Caribbean island that gave the boats their name. Andrews, however, went further than mere admiration from afar. He owned one of the boats and every summer for years would sail it back to Carriacou to its birth place, spending time with the man who built it, Alwyn Enoe.

What Andrews found was a great tradition, passed down the generations from Scottish settlers who sailed there centuries ago. But with Enoe as the only Carriacou boat builder left, it was a tradition that was dying out.

He set out to document it. The filming took five years and followed many ups and downs in Enoe’s efforts to build one final sloop with his sons. Andrews has shot the story beautifully, as sensitive to his subjects as he is clearly admiring of their knowledge and application. Certainly, no boat builder will ever complain about uncomfortable yard conditions after seeing some of the industrial methods employed on Carriacou.

The desperately long-winded means of collecting the necessary timber, log by painful log, to plank the boat, is perhaps one of the film’s most memorable scenes.

The build up to the climactic arrival at Antigua Classic Yacht Regatta, where the beach-built newcomer goes head to head with some of the great classic yachts of our time, is story-telling at its best. The audience reaction when I saw it in Mystic, some with tears in their eyes, was by all accounts the same reaction that has greeted the film all over the world. It has won awards at multiple film festivals.

Andrews has created a wonderful document of traditional boat building at its most intuitive.

What you thought about Vanishing Sail

143 attended with 63 responses, a hit rate of 44%. Because 91% of respondents rated the film Excellent or good this has moved Vanishing Sail to the most popular film of the Season so far.

The following I think is an excellent summary of what most of you told us. “A gorgeous film; inspirational journey exploring a fading craft that reflected a former every day trade and livelihood. At times I thought I was looking at a moving painting, but with a narrative of colourful characters and rich and beautiful scenes. Did enjoy the interweaving of the stories and commentaries by some striking voices of boat builders, neighbours, and seamen. Couldn't take my eyes off it, as the photography held my gaze. What a story of an old disappearing skill and Aylwin Enoe's moving efforts to preserve it, the hope and sadness intermingling. Triumphant in the end though!” and “A beautifully shot film about sailing craft and craftsmanship; the skills required to create vessels for survival, passing these on, and about hope; perhaps the next sloop will be the fastest, and that traditional crafts will not be lost and will endure in a changed world. Wonderful characters and stories beautifully and sensitively filmed. Also, brilliant camera angles especially on the sea allowing the viewer to feel the sense of being aboard the sloop cutting through the waves. A really emotional film and I was moved by the poignancy of Enoe’s story, love of his work (especially the caulking) and his family. The sadness of selling his last boat uplifted in the hope that it helped him in retirement, but also by his sons being commissioned, and continuing the craft that he’d taught them. I left wanting to give Enoe a hug, with a strong desire to sail in one of his sloops, and hoping that they’re still being built. Brilliant, wonderful film”.

“Wonderful cinematography. Gentle pace. I worried throughout for their safety when using the tools and sailing”. “I thoroughly enjoyed this. So beautifully shot and the music was wonderful. Very uplifting. I might be away in Antigua next week”. “Beautifully filmed with wonderful music. Extremely touching to see the skill, perseverance and workmanship required in building such an amazing vessel. Heart-warming to see family pulling together in this way”. “My film of the year, even before I’ve seen them all. Been there – love the people, love the film. Life enhancing”. “Great photography from someone steeped in Caribbean sailing and traditions of the shipwrights”. “Brilliant. Brought back so many memories”. “A pleasant and unexpected treat! Great photography and captured another way of life precisely”.

Comments on the short ranged from “The short was very original” and “I particularly liked the opening scene, trying to make coffee hungover. The rest played out with mild amusement but didn't have me clutching my sides”. “The short was good. Much better than the last one” to, the “Short was ridiculous and not amusing”.  All other comments are on the website.

“This was a charming film (and a welcome change of tone from the earlier films this season!). Hearing directly from the range of characters brings the story to life and it was uplifting despite the underlying message that a whole skilled community has almost evaporated (and the poor goat!)”.

“With no interest in sailing or boats I nearly didn't bother, and although it wasn't a "knock out" film for me I don't regret coming. I found the historical context interesting, and most of the (especially older) people interviewed were priceless characters. Maybe 3 is a little harsh but it wasn't a must-see or repeat-view film for me.

“Although a bit dated. A touching film. Makes you want to travel there”. “So sad. A real tear jerker. But so positive and a determined family solidarity”. “I thoroughly enjoyed it”. “Noah would be proud of his spawning’s!” “A fascinating insight. Now we know how they do it. Great pictures.” “A wonderful insight into the culture and traditions of the Caribbean”. “Brilliant film. Truly inspiring”. “Beautifully shot, heart-warming and inspirational. Loved the short too!”

“Beautiful cinematography”. “So well edited to present life and boat building-tradition and current. The race shots were awesome- sense of speed and exhilaration”. “Wonderful to record the memories and the characters of the West Indies”. “Simply beautiful! (Should have had subtitles all through though)”. “A beautiful compelling story, brilliantly told with amazing photography. Excellent”. “Fascinating. Inspirational”. “A superb film. Stunning cinematography. Loved the music. Very heart-warming”. “Really inspiring and great photography”.

“Deeply satisfying documentary of love, endeavour and achievement. Excellent”. “What a delightful film. Excellent in all respects”. “Well shot – well portrayed. A fascinating story”. “A simple story beautifully told. Wonderful photography and an even better cast”. “Lovely film. Made me smile. Wonderful scenery”. “Utterly delightful film. Fabulous documentary”. “A fascinating portrayal of what is becoming a bygone age. A reminder of a simple life that must continue. Thoroughly enjoyed it”. “Beautifully filmed and the story grew as the film progressed”. “Stunning photography, a delicate portrait of an island off the tourist trail”.

“Very enjoyable. A real labour of love. The patience and endurance needed was something else”. “Very enjoyable”. “The film does well to capture the difficulty of keeping tradition alive and family together. However, unlike the boat there are a few cracks and holes but the passion of the project keeps everything afloat”. “Inspirational, beautiful, heart-warming with a wonderful soundtrack. Great to see an uplifting film”. “Lovely photography and an insight into life in the Caribbean”. “Well made, good sound and vision and well worthy to be documented. Conjured the spirit of the Caribbean as I remember it. Easy watching. Thank goodness for respite from recent gloom”. “The short was too noisy and a bit difficult to follow”.

“Very informative and interesting”. “Good as a documentary but somewhat lacking otherwise. Very difficult to read the notes on the film – often with no backing. Nevertheless an enjoyable evening”. “I enjoyed the craftsmanship but felt more could be made of the relationships of on screen arguments/absence of Mother/pride”. “Mixed quality – not remotely interested in boats or sailing, but there was much beauty in the photography, the characters and their love for a slow build craft”.