When their deeply religious mother dies, her seven children bury her in the garden and continue life as normal - until their absent father (Dirk Bogarde) reappears. This is a movie about children, but not for children! 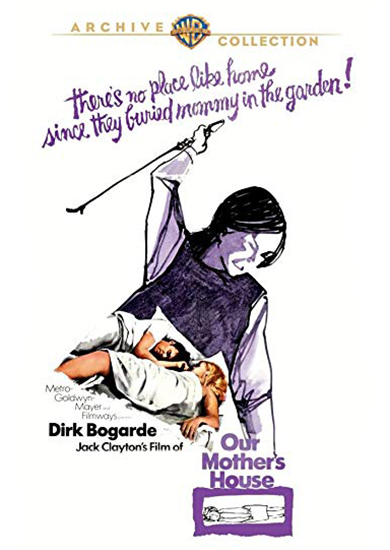 The use of children in movies is a hazardous business, if only because the little monsters walk away with the whole enterprise: plot, atmosphere, everything. They're so nauseatingly cute and well-trained that nothing serious can take place while they're on the screen, and no adult actor can hope to hold his own against their innocent blue eyes (something W. C. Fields must have understood very well the day he spiked Baby Leroy's orange juice with a pint of Smirnoff's).

Occasionally, however, a director succeeds in beating the little prodigies into submission and wringing restrained performances from them, and when this happens, the result can be memorable. Peter Brooks did it with his castaways in "Lord of the Flies"; Lee Thompson did it with Hayley Mills in "Tiger Bay"; and now Jack Clayton has done it superbly in "Our Mother's House."

It is, I suppose, a horror film. It is set in a bleak old Gothic mansion, and it has dead bodies and communication with the spirit world and all that. But it is a ghost story without ghosts: the best kind. And the spirits speak only in the minds of the children. In the end, nothing supernatural can match the horror that the kids find in their own, real, everyday world.

The house in inhabited by seven more or less typical British kids and their dying mother. She has turned to a fanatic religious fundamentalism, refuses the care of a doctor and gets the kids hung up on morbid theories of guilt and punishment before she dies. To escape the orphanage, the children decide to keep her death a secret, and after they bury her in the garden, they hold gloomy séances. All this is in contrast to the ordinary activities of their daytimes, when they go to school, buy groceries and succeed in cashing a forged check.

The kids develop into very believable personalities, especially the oldest girl (Margaret Brooks) and the next-oldest (Pamela Franklin). There is also a very small and curly-headed little brother (Gustav Henry) who somehow manages to be appealing and precocious without overdoing it. The other four children are also splendidly cast.

Then their father (Dirk Bogarde) turns up and helps them continue the deception. He seems to be an appealing rogue, and the kids mostly like him until they get to know him better. Then things start to close in, the guilt and punishment complex starts to operate and the movie becomes one of the most suspenseful of recent years. It isn't phony "who goes there?" suspense but suspense based on real personalities trapped in an impossible situation.

Clayton, whose credits include "Room at the Top," "The Pumpkin Eater" and "The Innocents" directs with firm restraint. Bogarde turns in a competent performance not quite up to his best, but it really isn't his picture anyway. It belongs to the kids, and they are very real kids.

WOULD you believe that seven children—even seven very proper English children—could manage to convince the grownup world for any length of time that their mother is not dead but has "gone to the seaside for a rest?"Would you believe that the orphans could maintain themselves so capably that neither school officials nor neighbors nor postman would eventually catch on to the fact that Mother is not in Brighton, but buried in the backyard?Even if you wouldn't, you are likely to find yourself oddly touched by "Our Mother's House," a Metro-Goldwyn-Mayer film that opened yesterday at the Baronet Theater.Based on a novel by Julian Gloag, this movie produced and directed by Jack Clayton seems at first to be exploring territory earlier charted on film by Peter Brook's "Lord of the Flies" and Mr. Clayton's own 'The Innocents"—namely, the terrifying propensity of the child's mind towards a particularly savage kind of "religion."

As the youngsters in "Our Mother's House" hold a séance with their dead mother—dead of natural causes, by the way—and hear her whisper that their little sister "must be punished," we are observing a primitive rite that can only end in primitive blood-letting.That the blood-letting is only symbolic — a fact for which this reviewer is grateful, considering the charm of the little girl in question—is accidental. The most innocent among us are potentially the most dangerous, says "Our Mother's House," and let us have no nonsense about the natural goodness of man.With the entrance of Dirk Bogarde, however, the film comes down to earth—or almost. Mr. Bogarde plays the children's long-lost father, or foster-father (he tells us that all of the youngsters are illegitimate; we're not sure whether to believe him) and he is willing to play along with their plot when he sees a way to profit by it.

Yet Mr. Bogarde, dissolute but hearty, is not an utter rat, and the presence of a rough-talking adult male in the house begins to dissipate the feverish, ghostly atmosphere of perpetual funeral that has pervaded it since Mother's passing. On the other hand—the picture is full of other hands—Mr. Bogarde introduces the children, by example, to some corruptions of the flesh.The picture ends with Mr. Bogarde bloodily disposed of, and the children coming out of their long bad dream at last. "It wasn't your fault," one of them reassures a sister. "It wasn't any of our faults."How far you are willing to go along with all this depends on your susceptibility to melodrama that goes in for gray, rather than black-and-white, characterization.

In a sense, "Our Mother's House" would be a much better movie were it less sensitively drawn—were Mr. Bogarde, for example, an out-and-out villain. Then we could simply sit back and root for the children as they react to his desecration of Mother's memory.As it is, we are forced to think of the characters as real people, which makes their less-than-real situation seem even more contrived. But the method of the film has its rewards. Mr. Bogarde is immense, and the children, with not one "cute kid" in the lot, are distinctly drawn—particularly Margaret Brooks's role as the oldest girl—and played with great delicacy. Those are real tears and real runny noses.Larry Pizer's muted color photography nicely evokes the clamminess of London in late autumn, and Georges Delerue's pastoral score is a calm counterpoint to the spooky goings-on.

What you thought about Our Mother's House

128 members and guests attended last week with 56 responses giving a giving a hit rate of 44%.

“Death to start and finish impels the atmosphere to unsettle us throughout, a story that never becomes predictable or cosy; darkly chilling characters with performances that seemed natural. Have always thought that Clayton was a very fine director having a commanding way of telling a story with his camera. Made me recall 'The Innocents' with shades of that in this. Clayton draws some highly intense performances from the kids, especially Margaret Brooks as the eldest child who holds us in each scene. Pamela Franklin (in the Innocents as well) almost glowed and Mark Lester is dynamic. Felt that Georges Delerue's music both intensifies and softens the movie. Enjoyed Dirk Bogarde as a 60's chancer almost spiv character, never a caring father. A terror movie and a fairy tale that made me flinch at times; a sweep through childhood, its melancholy, ghosts and joys. Liked the autumnal twilight that shines on a London suburb (Croydon?) through to the real darkness in the last sequence. Don't know if I liked it though”.

“Good film, hardly believable that they got away with it for so long, great acting from the children. Could hear it clearer when I took my hearing aid out it was so loud!” “What a disturbing film! Where will the children go? What will they do?” “Believable in an entirely unbelievable situation – I loved it”. “What a gem! Couldn’t take my eyes off the interior decoration of the house. That wallpaper, that furniture, the glass in the front door!” “Disturbing for me – maybe that was the interior”. “Brilliant acting by the children. Sinister role played excellently by Dirk Bogarde”. “Gripping from beginning to end!” “Quite hard edged for the time”. “Beautifully acted by the children”. “Mark Lester shone out even at this tender age”.

“Worrying. Strong sibling bonds. Days when children only had school uniform and “play clothes””. “Riveting – built inexorably. Soundtrack good but dialogue often difficult to make out. Amazing how of its time in every way – acting, direction, sound – but a great film”. “Poor sound quality and to me the film did not stand the test of time”. “Enjoyed the film very much. A bit dated but the children were magnificent in their roles and were the stars, although Dirk Bogarde made his character suitably despicable!” “Good to see Crystal Palace dinosaurs in a film! Unfortunately sound track poor”. “Riveting acting by all”. “A clever story but unbelievable! Well-made and wonderful acting by the children. Very 1967! Not the best Dirk Bogarde, too sentimental and mawkish”. “Great acting by the children. Grief binds – circumstances separate”.

“The film depicted beautifully how confusing the adult world must seem to children. Great performances, loved the 60’s vibe!”. “A beautifully crafted film, so that occasionally one could almost suspend ones disbelief”. “Great performances from the children”. “Beautifully filmed and well-acted. Rather disturbing”. “The children were amazing. Clever and unbelievable”. “Interesting”. All other comments are on the website.

“Wonderful performances by the children. A touching heart rending film”. “Plot vey unusual and unbelievable with so many children (wonderfully acted) by a faithless husband”. “Amazing acting but whole story unbelievable and rather absurd. But reminded me of The Lord of the Flies”. “Children were for the most part excellent. Generally the film was too loud”. “Unconvincing story with a feeble cop out ending. Photography was atmospheric and children acted well…but unsatisfying”.

“Mixed feelings – great kid’s acting- miserable film but held me”. “Horribly dated. Very slow. Picked up a bit when Dirk Bogarde arrived but even he wasn’t convincing. Children were good”. “I can’t think of anything good to say about this film Shorter introduction would be much appreciated”. “Horrible. Best left unwatched”. “Performances overstated and unconvincing – dated – suitable perhaps for a film studies programme – as was the lecture at the beginning”. “Very odd. Unappealing and unconvincing”. “Heavily melodramatic and implausible … No suspension of disbelief for me at any point. Ponderous direction- the odd flash from Bogarde but not much else. Takes itself far too seriously – clichés galore”.