GFS is screening its first Bergman film in the centenary year of his birth. A successful concert pianist (Ingrid Bergman) visits her daughter (Liv Ullmann) in a story of redemption and reconciliation. Cinematography by Sven Nyquist, with music from Chopin, Bach and Handel. 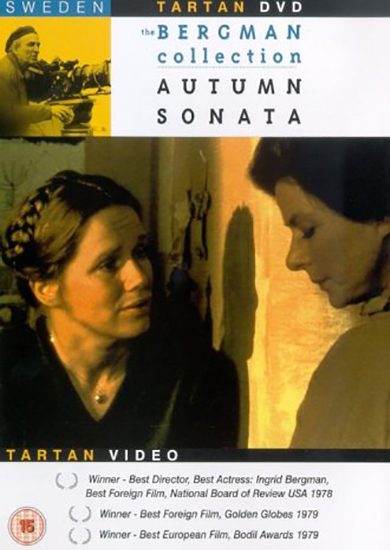 The two Bergmans, Ingrid and Ingmar, only worked together once, very late in their careers. It wasn't his last film – a handful remained, including Fanny and Alexander (1982). Ingrid, meanwhile, would play Golda Meir in a 1982 mini–series, but this was her final film role, winning her a seventh Oscar nomination. "After three Oscars, they finally decided I can act," she said.

Liv Ullmann was unlucky not to be listed alongside her. It's hard to imagine either performance, in this anguished, claustrophobic bout of mother–daughter combat, working nearly so well without the other. The film is like a two–woman truth–and–reconciliation committee – only without the reconciliation, which its writer–director holds just beyond our grasp at the end.

Virtually throughout, the setting is a parson's house in the south of Norway. We begin and end with Ullmann's Eva, an owlish bluestocking, writing letters in long–shot, while her husband, a quietly devoted clergyman called Viktor (Halvar Björk), speaks to us directly of their chilly marriage. In the first scene, Eva is inviting her estranged mother Charlotte (Bergman) to stay, following the death of the latter's lover, Leonardo, and a period of seven years apart. After Charlotte's visit, which involves recriminations and mutual spite, Eva returns to the desk and writes again to try to undo some of the wounds inflicted.

It's not Bergman's way as a dramatist to roll his sleeves up and go straight for the jugular. Instead, Autumn Sonata takes the obliquer tack of initially letting pretend civility hide what's not being said.

In one brilliant sequence, music criticism becomes a kind of echo–chamber for the central relationship. Charlotte, a once–renowned concert pianist, asks Eva to play for her. We hear Chopin's A minor Prelude, a piece of gently see–sawing desolation. But Eva's nervous tension and neurosis undermine her performance so that Charlotte is moved by her daughter's limitations, not her prowess. You feel resentment bubbling up, and in a mood of passive aggression, Eva talks her mother into demonstrating where she went wrong. "It hurts, but he's not showing it," Charlotte explains of Chopin. These two extraordinary actresses share the piano stool and the shot: Charlotte's lost in her technique, while Eva gazes at the mother she finds both a mystery and a monster. She hurts, and can't help but show it.

Is Charlotte such a monster? A catalogue of grievances comes out – her absenteeism, her faithlessness to Eva's father. The braces she made her daughter wear, the first love she sabotaged. But the film maintains a Chopinesque equilibrium between their points of view. Can Charlotte's failings possibly justify Eva's ferocious refusal to forgive? Bergman turns this into a fundamental question about human cause and effect: one with no single right answer.

Sequestered away in a back room of Eva's house is the deepest source of her mother's guilt – another daughter, Helena, who suffers from a muscular–dystrophy–like illness. She's been rendered inarticulate and only Eva, who has taken her sister in from a care home, can decipher what she's feeling and saying. Lena Nyman makes Helena an entirely credible person.

But the way she moans and writhes as her mother and sister battle makes her feel too like the offspring of their tormented bond, or a psychic emblem for it.

Autumn Sonata (AA) is like a very dreary and deadly serious novella by Ingrid Bergman. Mummy, a famous concert pianist, visits dull provincial daughter and husband after her lover has died. What follows is the predictable and boring parade of old jealousies, hurts, wounds, and boils about-to-burst. Another daughter, a spastic, is regularly exposed in close-up, stuttering and screaming. Her disease, it is suggested, was due to maternal neglect.

Quite understandably the mother flees from her brood in horror. However, the meeting has given the married daughter a new insight into her own inadequacies, and she writes a letter to ma suggesting that it is never too late and they really must try again.

Ingrid Bergman makes you believe in the mother's self-absorbed pride and latent vulnerability for the duration of the movie, and Liv Ullman is touching as the daughter obsessed with the raw deal handed out to her. But I don't think Bergman (Ingmar) intended quite this effect. His self conscious, immensely grave direction suggests some statement about the meaning of life and all that. It is all exquisitely tedious. If only somebody would fart, or ask what's on TV, or demand repayment of a loan. But the spiritual immolation never stops. OK, I suppose, for those who like it.

What you thought about Autumn Sonata [Höstsonaten]

Our chair, Kristina, has given me a quote from Bergman’s autobiography The Magic Lantern: which reads “Film as dream, film as music.  No form of art goes beyond ordinary consciousness as film does, straight to our emotions, deep into the twilight room of the soul.  A little twitch in our optic nerve, a shock effect:  twenty-four illuminated frames a second, darkness in between, the optic nerve incapable of registering darkness.“

Physically maybe not, but many of you while praising the acting and direction did find the tone of the film both dark but “Insightful”, echoed by “Brilliantly acted, very dark”. “An intense emotional ride – no hiding from the truth. Amazing acting from both Bergman and Ullman”. “Painful and brilliant acting, direction and screenplay”.

Another member told us that it was “Stunning! Powerful! Moving! Raw! Riveting! All deserve Oscars! Should be compelling viewing for all counsellors!” “Stupendous acting – a truly wonderful experience”. “But sooo Dark!”

“An amazing film! Very powerful! What are our priorities? How honest are we? And the problem of guilt?” One member told us that “last night I left a slip saying the film was 'good’. I still think it was.  However, it is not as good as some of his other films (e.g., Wild Strawberries, The Seventh Seal, Fanny and Alexander...)”.  “Strong direction encouraging powerful performances from the leads in this bleak story of a daughter crushed under the weight of her mother’s disappointment, only later understanding that she had perpetuated the situation by her own fear of failure and rejection”. “Intense and riveting. I was drawn into the world of mixed signals and saw reflected bitterness and anger in all the characters to differing degrees. Glad to see it but didn’t particularly enjoy it”.

“Two extraordinary female actors – spellbinding to watch their facial expressions and interactions. Phew!”. “Sustained tension, excellent acting”. “Wonderful acting and facial expressions”. “Bleak. Four unhappy people. Striking facial expressions”. “Well that certainly cheered me up!” “A powerful, emotional drama”. “Heavy going”. “”Relentless”. “Seeing mother and daughter torturing each other was fascinating and riveting – but incredibly painful. A brilliantly produced and acted film”. “Brilliant acting”. “So deep, so moving, so sad, so unresolved”. “Intense and miserable but I was gripped. Great acting”. “Very well acted. Very powerful. A clear understanding of the complexity of mother and daughter relationships. It reflect the necessity for love in childhood – powerfully. Very thought provoking”. “Superb acting but not a bundle of laughs”. “I know it is a good film and I should like Bergman’s films but I have never enjoyed them. This film confirmed that”. “OMG! That must be the most depressing film I have ever seen! I hope he never sends the letter”. All other comments are on the website.

“I enjoyed it but a pity the aspect ratio was wrong – they all appeared short, chubby people which they are not it did detract from the enjoyment for me”. “Bergmanesque, of course and how. Had it been a little less unrelenting it would have been more enjoyable, but of course that wasn’t the point. In its own way outstanding. BTW, shame that the proportions of the picture were wrong, should have been 3:3 rather than 10:9 or whatever”.

“I think Ted Whitehead’s comments (The Spectator 24th March 1979) still apply! I would rate this film as average and unlike the examples we saw at the Godalming Summer Film Festival. As a new member I am looking forward to the seeing the rest of the 2018/2019 programme”.

“Intense and very psychologically acute. Brilliant acting. I’d have like a little more variety of tone. It got a bit samey”. “Hard work but interesting”. “Excellent acting”. “Was very talky and old fashioned”. “Brilliant acing but fairly predictable”. “Rather grim and rather depressing but good acting”. “Oscar nomination went to the wrong actress! Over indulgent inspection of a broken relationship – nowhere to go with it”.

“OMG”, “Not exactly a laugh a minute”. “Unremitting gloom Liv Ullman deserved the Oscar nomination”. “Interesting but dire”. “The scenery was nice! Who chose this? Recommendations attached”. “Somehow the emotion did not always seem fully justified.  Incidentally, was the picture size right?” ”What a dark film! He obviously didn’t have a happy childhood. Brilliantly acted though”.